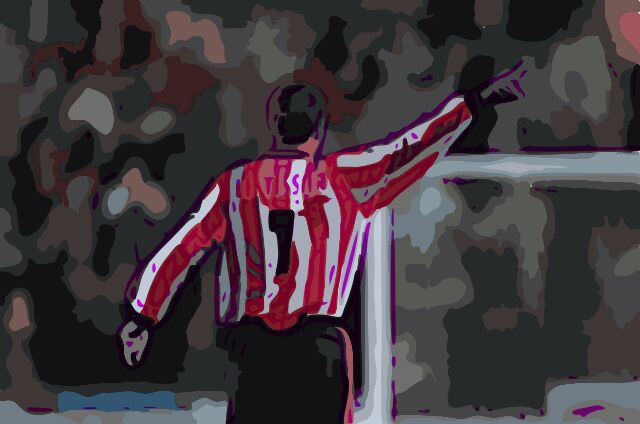 When you think of “Mr Southampton” from the late 1980s, through the 90s and into the new millennium, there’s only two people that can possibly spring to mind.

The other is probably more memorable to a global audience.

Matthew Le Tissier was one of the gun players of the early Premier League era.

In a time of football where space was rarely found for skilful, creative, game-changing midfielder – especially when they weren’t a huge fan of doing the defensive stuff – Le Tissier shone as an absolute fantatista.

So when it came to scoring the last-ever Saints goal at their historic ground there was only one person fit to even dream of doing it. Sorry, Francis.

The history of the Dell

As the world moved towards the 21st century, Southampton Football Club knew that they needed to move home.

As wonderful, unique, intimate and historic as the Dell had been to them since 1898, the final capped capacity of 15,200 was not enough for the club to forecast a stable financial future.

After several years of planning, rejections and resubmissions, they finally announced that they would be moving to a new 32,600-seater facility on the old city gas works – it would be named St Mary’s.

103 years of history was to be waved goodbye – the Saints had played their first game at the Dell against Brighton on September 3rd, 1898.

With the lack of ideas being suggested for the name of the ground, the Dell was settled on – dell being a small valley surrounded by trees. In the modern era, marketing companies would charge hundreds of thousands for such creativity.

The ground proved an early good omen for the club – four Southern League titles were claimed, four FA Cup semi-finals reached (as a non-league outfit) winning two of them, making but losing in the FA Cup Final.

In 1927, the directors commissioned famed stadium architect Archibald Leitch to redesign their East Stand. Leitch was the pioneer in the modern stadium design in those days – but even a great architect cannot protect a ground from someone dropping a cigarette and setting the new stand alight.

After a bomb hit it in the Second World War, Southampton had to play away from the Dell for two seasons – becoming tenants at Fratton Park, Portsmouth. A bomb had landed in the Milton Road penalty area leaving an 18-foot-hole. That’s what it took to get the Saints asking their arch-rivals for help.

In 1950, it was the first ground to have permanent floodlights installed – the club going modern again as it continued its ascent up the Football Leagues.

October 1969 saw the record attendance at the Dell, as 31,044 watched European Cup winners Manchester United including George Best and Bobby Charlton beat the home side 3-0.

By the end, following various periods of renovation – particularly due to the post-Hillsborough Taylor Report – the Dell was a ground famed for the fans being on top of the players. Compact and imposing, it was an away day most teams didn’t look forward to. Especially if they were wearing the wrong shirts, as proven by Alex Ferguson’s United side in the mid-90s.

Arsenal were the visitors. Manager Arsene Wenger knew the value of the old ground, saying;

“It’s always been a tough place to go, and when they move to a bigger stadium with a bigger pitch, they may find less fear from the opponents as well. It’s a lovely ground and, when you look at the fixtures, you know you will have done well to get the points. No matter how good Southampton are, you know you will be playing against Southampton and the crowd here.”

Le Tissier was only fit enough for the bench. He’d been struggling with injuries for some time, but there was no way on Earth he would be missing the farewell. Speaking to Graham Hunter on his podcast, Le Tiss described how he has spent the week with a feeling he’d score the winner – a premonition maybe, or visualising something into existence.

Arsenal had twice led through Ashley Cole and Freddie Ljungberg and had been pegged back twice by Hassan Kachloul.

The game seemed to be drifting to a 2-2 draw until Southampton’s legendary magician was summoned from the bench in the 74th minute, replacing Kevin Davies.

In the last minute of football at the historic home, James Beattie won an aerial duel with Tony Adams. Martin Keown failed to deal with the situation and the ball fell to Le Tissier in the area. He wrapped his left boot around the ball and hit a clinical half-volley past Arsenal keeper Alex Manninger.

The ground erupted, a last-minute from their hero in the final game at their home. What better ending?

Le Tiss was mobbed by his teammates and recovered to say after the final whistle;

“It’s very special to score the last goal and I couldn’t have imagined a better ending. But I don’t see why I can’t score the first goal at the new stadium as well!”

Unfortunately for him, he didn’t get that wish – a one-year deal followed but injuries were really catching up with him by this point and appearances were very limited.

Le Tiss never scored at St Mary’s but will always have the last professional goal at the Dell – and rightly so.

“Who better to say farewell than one of the finest players to wear the red and white?”

The words of Jon Champion, the BBC’s Match of the Day commentator – indeed.