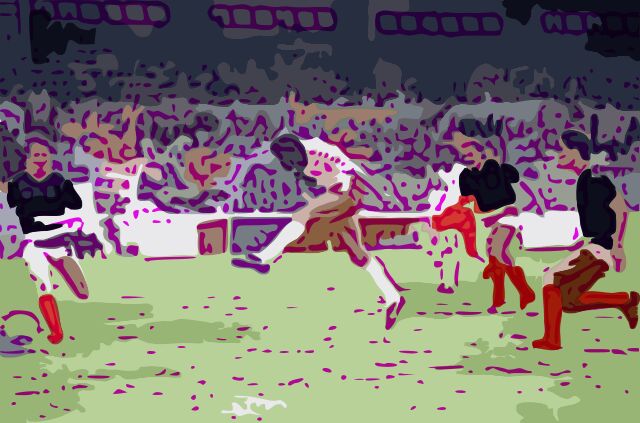 Four days into this World Cup and we’ve already had the holders being held by Bulgaria, France struggling to get past Canada and England losing to Portugal. We’ve also had the Soviet Union thumping Hungary. Now it was the turn for what was known as ‘the group of death’. All four teams from Group E were in action. But before that, we had the debut appearance of Iraq at a World Cup.

The first game of the day was one between two teams regarded as ‘minnows’. Paraguay were competing at their fourth World Cup but hadn’t reached this stage since 1958. They had drawn with Brazil in qualification, and then beat Colombia and Chile in the playoffs. They were managed by Cayetano Re, who’d been a member of the ’58 squad.

Iraq were making their debut on the world stage. They were managed by Brazilian Evaristo, whose playing career had seen him at Flamengo, Barcelona and Real Madrid. They came through three rounds of qualifying, which saw them score a late goal against UAE before seeing off Syria over two legs.

This was the same group Mexico were in and after they beat Belgium the day before, a win here for either side could be crucial.

Both sides had chances to open the scoring, with Iraq appearing far from overawed with their first taste of the world stage. Paraguay went closest when a fine passing move saw Mendoza fire over from about 12 yards after Cabañas’ nod-down. Hussein Saeed then had a shot from long range which just went wide of Fernãndez’s post.

But then with just 10 minutes of the first half remaining, Iraq’s defence was ripped apart far too easily from a through-ball. Romero ran onto it and lobbed the keeper for the opening goal.

Soon after, Haris Mohammed curled a free-kick which Fernãndez did well to tip over.

In the second half, Mendoza should’ve put the game beyond reach. He was free in the area, and as the keeper came out he easily went round him. But Nadhim Shaker had got back on the line and he headed Mendoza’s shot over the bar. By now Paraguay were in total control and a little too nonchalant with the chances which came their way. They ran out 1-0 winners and should really have scored many more. But it was three points and joined Mexico with a win each.

Group E was considered the very definition of a ‘group of death’. Two times winners, Uruguay were up against another two times winner, West Germany. With Denmark and Scotland the other two sides, it was expected to be tight.

Uruguay hadn’t competed in the last two tournaments but were back at a World Cup having won their qualifying group against Chile and Ecuador. They had the elegantly talented, Enzo Francescoli (known as The Prince) in their ranks.

West Germany were always one of the teams to beat for any side hoping to win a World Cup. They’d suffered their first-ever qualifying defeat when Portugal beat them, even though they were already through. They were runners-up in Spain ’82, but disappointing at Euro ’84. They could still count on world-class talent such as Karl-Heinz Rummenigge, Lothar Matthäus and Toni Schumacher.

Maybe not the classic some hoped it would be, but it was certainly a physical game. No more so than when Uruguay went in front. The game was barely four minutes old when Francescoli seemed to be tripped on the left of midfield, but play went on. Inexplicably Matthäus played the ball back over his own defence from the halfway line. Antonio Alzamendi pounced on the loose ball. Klaus Augenthaler tried to bring him down on the edge of the area, but the River Plate striker skipped past his challenge. Then Schumacher came out and tried to haul him down, but he continued to skip on and then thumped the ball in off the underside of the bar.

West Germany’s talisman, Rummenigge, came into the tournament not 100% fit and started on the bench. With the Germans unable to find an equaliser they threw him on in a bid to make the difference. Augenthaler came closest when he fired a shot from outside the area which thundered against the crossbar. The Germans became increasingly desperate with shots reigning in from everywhere. Eventually, Augenthaler lobbed a ball into the area and Klaus Allofs managed to beat Fernando Álvez. There were only six minutes left on the clock. The game ended 1-1.

After the draw between Uruguay and West Germany, Scotland and Denmark had their chance to top the group. Scotland were at their fourth successive World Cup and hoping to get out of the group stage for the first time. They came through qualifying finishing second to Spain in their group. A late Davie Cooper penalty against Wales grabbed qualification at the expense of the Welsh. It was a bitter-sweet moment as news spread of the death of legendary manager, Jock Stein who was in charge of the squad in ’82. Second place meant they had to beat Australia in a play-off to reach this stage.

Denmark had rapidly become one of the most exciting sides in European football and were now looking to showcase their talent on the biggest stage. The likes of Preben Elkjaer, Soren Lerby, Jesper Olsen, Michael Laudrup and Frank Arnesen were now the talk-of-the-town. They’d been a penalty kick away from the Euro ’84 Final and winning their qualifying group just added to their billing for this tournament.

The team news for Scotland was that Dundee United’s Paul Sturrock was chosen to partner Charlie Nicholas in attack.

Denmark’s preparations were hampered by a number of their squad going down with stomach upsets prior to the game.

Denmark was soon looking dangerous on the attack with the pace of Michael Laudrup. But it was Charlie Nicholas who had the first real chance when he chested down a Steve Nicol header but he shot straight at Rasmussen’s legs.

Scotland had a number of set-piece opportunities which resulted in headers going just over from Gough & McLeish. Then Gough was presented with a glorious chance. Aitken and Strachan moved the ball well from the left, and Strachan fed Gough, who’d come up from the back. He was ahead of the defender, But the Dundee United player took it on his left to give himself space from the advancing keeper, then skied his shot over the bar.

The half ended with Arnesen shooting just over after a little interchange with Elkjaer. It was amazing how many shots went just over the bar in the first half.

12 minutes into the second half and the deadlock was finally broken. Arnesen picked it up in midfield then fed Elkjaer on the left of the area. The Verona striker skipped past Miller and fired a low left-foot shot past Leighton’s left hand for the opening goal.

Roy Aitken then had the ball in the net. Strachan’s left-wing corner went all the way to Miller on the right-wing. He floated it back into the area where Aitken took it on his chest and knocked it in off the post. But the linesman’s flag went up straight away. Replays showed Aitken was offside when he received the ball, but not when it was kicked. Scotland were very unlucky.

They were again unlucky a few minutes later when Strachan’s right-wing cross almost crept in under the keeper at the near post.

In the end, Denmark held on and registered an important victory. The Scots could consider themselves very unfortunate, but their performance should’ve given them hope for the next two matches. The Danes looked a match for anyone.

So now we’ve seen every team in this World Cup. USSR, Argentina and Denmark have looked the most impressive.

Tomorrow is the big game of the group stage, 1982 winners Italy against 1978 winners Argentina. After their demolition of Hungary, USSR were now expected to be quite a match for France too so that was quite a prospect.