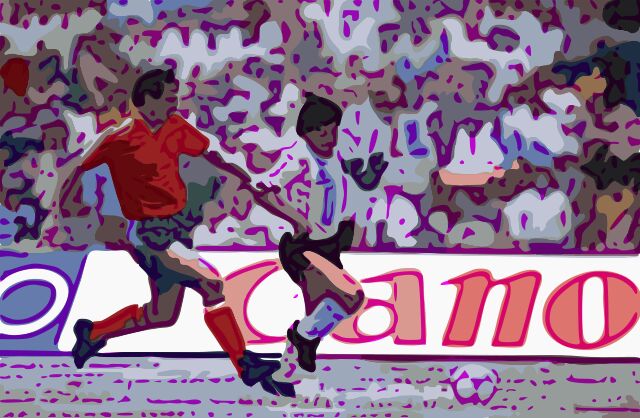 After USSR and France confirmed their dominance in Group C, it was the turn of Group A to conclude their matches. This was how things stood going into the final games.

The bottom teams were playing the top two. Italy had to be careful against South Korea but realistically a draw should be enough for them, even if Bulgaria beat Argentina.

The Italians let Bulgaria back into the game when they met on the opening day. If South Korea could pull off a shock and beat Italy, then a draw in the other match would see the Italians bow out at the first stage in their defence of the trophy.

In the Olympic Stadium Argentina were taking on Bulgaria. They’d looked pretty comfortable in their matches so far and were expected to ease past their opponents, so perhaps Italy shouldn’t be too worried.

Italian boss, Enzo Bearzot, made one change from the side which drew with Argentina on day six. Fulvio Collovati, who played in every game four years ago, made his first appearance of this World Cup. He replaced Giuseppe Bergomi.

South Korea’s boss, Kim Jung-Nam, also made just one change from the side which held Bulgaria to a draw. Choi Soon-Ho returned having played in the first game against Argentina.

Four years before, Italy had drawn all three group matches and only went through on goals scored, at the expense of Cameroon. They’d drawn their first two matches here this time round and were keen to start winning.

They created several chances early on. Altobelli headed just over, then Cabrini forced a good save from Oh Yun-Kyo. But then the Koreans came into it. Byun Byung-Joo hit a fierce shot from the right edge of the area which fizzed just wide.

Eventually though, the Italians were able to make their pressure count when taking the lead in the 17th minute. Galderisi theatrically fell to the ground in the area. The referee was having none of it. Di Gennaro kept the attack alive and crossed to the far post where Altobelli took it expertly on his chest. He then dummied the keeper and clipped it past the man on the line. 1-0.

It was his third goal of the tournament and testament to how he’d been Bearzot’s main man in attack since Spain.

He missed his chance of fourth goal not long after. A diagonal ball played into the area towards him saw him tripped by Huh Jung-Moo. It gave us another magical piece of commentary with the immortal line “Huh tripped Altobelli”

The ref pointed to the spot and the Italian striker confidently stepped up and sent the keeper the wrong way. Unfortunately for him it hit the post and came back out again.

The Italians remained a goal to the good at the break and should’ve added to that early in the second half but Bagni’s shot went just over the bar.

Then it happened. It seemed almost inevitable the Koreans would get back into it and give the Italian fans a nervy last thirty minutes. It was a cracker too, from Choi Soon-Ho. He found space for the shot on the left-hand edge of the area it was so strong there was no way Galli was saving that. Three times in this World Cup the Italians had gone in front, and each time they’d been pegged back. 1-1.

But this time Italy responded. A free-kick from Conti chipped over the wall found Altobelli, but he couldn’t control it. Galderisi knocked it on allowing Altobelli to turn and poke it home. 2-1.

The Italian fans were still a little nervy as to whether the next goal would be theirs, though. With eight minutes to go it was. Good work from De Napoli down the right of the area and his ball into the six-yard box was missed by Altobelli. But as Cho Kwang-Rae went to ground in making the challenge, he inadvertently put the ball in with his hand. 3-1

The Koreans did score again when Huh Jung-Moo turned in a header from Cha Bum-Kun and it was indeed a nervous last few minutes for Italy. But in the end, they won 3-2 to confirm their passage into the next round.

Argentina manager, Carlos Bilardo named an unchanged side from the one which drew with Italy. They had not gone through a group stage unbeaten since 1966, yet were confident of winning this one. As with Italy, a draw was going to be enough to get through.

Bulgarian boss, Ivan Vutsov, named four changes for a match they too only needed to draw. They’d come back late against Italy and should’ve held on to beat South Korea. Now they stood on the verge of making it out of the group stage for the first time ever, at the fifth time of asking. However, they’d need to do something none of those previous sides had managed. Win a game.

Gospodinov. Zdravkov, Iskrenkov and Arabov were left out. In came Aleksandar and Plamen Markov (no relation), Yordanov and Zhelyazkov to replace them.

The countries had met in a World Cup once before, back in 1962 when Argentina won 1-0. The four friendly matches they’d played since then had all gone Argentina’s way too.

Argentina got off to a great start. Four minutes in and Cuciuffo intercepted a pass wide on the right. Aleksandar Markov made a hash of the clearance and Cuciuffo went on to cross to the far post where Valdano got up and headed it in. It was his third goal of the tournament, after his double against South Korea. 1-0.

Almost immediately Bulgaria came back with Yordanov trying one from almost 40 yards out. It wasn’t far away either but just went wide.

Victory for Argentina would mean they’d avoid France in the next round. Maradona soon came more into the action, and several times he dribbled past multiple challenges but the end result just wasn’t there.

Argentina still lead at half-time and it was them who had the first real chance of the second period. Garré and Valdano exchanged passes down the left. The cross from Garré found Valdano in the area but his header went just wide of the post.

Shortly after Valdano did get the ball in the net. A beautiful pass with the outside of his left boot from Maradona found the Real Madrid striker clear of the defence. But as he fired the ball into the net the linesman had his flag up for offside.

Bulgaria offered little and eventually Argentina added to their lead. It was a lovely move and of course Maradona was at the heart of it. Garré played a ball down the left wing where Maradona clipped it over Zhelyazkov and was away. As he reached a bye-line he played a glorious cross, with pinpoint accuracy, to the far post. It curled away from the keeper and Burruchaga hardly had to move other than to arc his neck and head it in. 2-0.

Bulgaria did go close when Getov’s free-kick went just wide of Pumpido’s right post. Burruchaga also went close after some lovely interplay between him and Maradona.

Argentina won comfortably in the end, 2-0 and looked to be tough opposition for the next round.

So with Argentina and Italy both winning it meant Argentina topped the group with Italy in second. Argentina’s reward would be a tie against the weakest qualifier in the Second Round, as they would line up against the fourth-best third-place team. For Italy, this meant a mouth-watering tie against France. World Champions against European Champions.

Bulgaria claimed third place. Losing 0-2 meant they’d dropped to third place in the table of third-place teams. This would give them a tie against the winners of Mexico’s group as things stood.

THIRD PLACE TABLE as it stands

Tomorrow is the turn of the hosts’ group, as they’re in action against Iraq. They lead the group on goals scored over Paraguay, who take on Belgium just a point behind them.

Not only that, we have a group-double header as England are in action in a critically important game against Poland. Group F has seen two draws from the four matches so far, and England could conceivably still qualify with a draw as their goal difference will be superior to Bulgaria. That is as long as Morocco lose to Portugal. If Morocco win, then England have to.