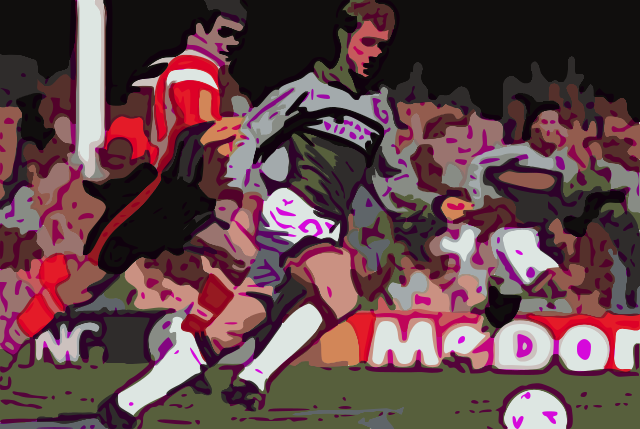 13th April 1996, and one of the finest excuses for a poor football performance entered sporting folklore.

“The players don’t like the grey strip,” he said. “The players couldn’t pick each other out. They said it was difficult to see their teammates at distance when they lifted their heads.”

He, of course, was Sir Alex Ferguson – then, plain old Alex.

Manchester started their 3-1 defeat at the old Dell in their now infamous grey shirts. They ended in a little-better blue and white number. And here, we will try and remind you of the story and fallout.

April 1996 and United were on yet another march. Ahead of their visit to Southampton, Fergie’s side had won 11 out of 12 to catch Kevin Keegan’s Newcastle at the top of the Premier League.

Southampton wouldn’t be a problem, would they? They were battling relegation once again and even with their tight little ground being a throwback to the good old days of smaller stadia, it wasn’t something that would put off United off their stride.

Their shirts though, an entirely different matter.

This commercial disaster (they look good in jeans, apparently – just not so good against the backdrop of fans in seats) was the reason Southampton led 3-0 at halftime thanks to goals from Ken Monkou, big Neil Shipperley and, of course, Matt Le Tissier.

Things had to change – and those things were mainly the kit.

Lee Sharpe, in the side that day, recalled to the Guardian in 2006 that “the manager just stormed in and said: ‘Get that kit off, you’re getting changed. Those were the first words he said at half-time.” Presumably, shortly after he uttered “and Butty, you needn’t bother – you’re coming off!” given that Paul Scholes was brought on for the ball-winner at the interval.

Sharpe wasn’t convinced it had much to do with the shirts, more the players just playing badly – not the first, or last, time he agreed with the manager.

United did win the second half 1-0, though. Maybe Fergie knew.

Gary Neville normally has an opinion

Gary Neville, speaking to Le Tissier on the Football Show back in 2020 explained further – Ferguson had brought a vision coach into the club and she wasn’t convinced that the grey shirts were the best for the players. What she had said had clearly stuck in the legendary boss’ mind as, suggest Neville, why else would United have a full change strip with them for an away game?

United had actually failed to win four other games in the kit before their defeat on the South Coast and, unsurprisingly, it wasn’t seen again. Wearing the fashion-focused ensemble, they had drawn with Nottingham Forest and lost to Aston Villa, Arsenal and Liverpool.

Le Tissier didn’t even notice and wasn’t aware until a journalist asked him about it in the car park after the game.

“I thought it was one of the worst excuses I’ve ever heard from a team that’s just got battered. It took the attention away from the performance, which was probably the idea.”

The move cost United £10,000 by way of an FA fine (note, 1996 and this fine is still way more than far bigger offences that happen today…) and kit suppliers Umbro weren’t best pleased either.

Understandably, with the kit being binned off, sales dropped – even with the manufacturer knocking a tenner off the price almost immediately. Not that a price drop was much consolation to the parents of kids who had already bought the strip because, you know, looks great with a pair of Levis.

And it wasn’t even the proper kit they were wearing. With Southampton in black shorts, United’s dark grey shorts were deemed to clash so they were wearing their home kit shorts and socks. Still, it’s the shirts you lose in the background, right? Not the shorts. Or the socks.

Yet, United were not the first team that season to raise an issue with their kit visibility. Incredibly, Leeds United players had complained that their green and blue away kit had caused them problems away to Bolton. The key difference being, Leeds won 2-0 and manager Howard Wilkinson didn’t get them to change halfway through.

The rest of the season

The 1995/96 campaign was a bizarre season when you think about it. It kicked off with Alan Hansen saying you’ll win nothing with kids. Fergie lost it and made his team change shirts at halftime.

And, of course, Kevin Keegan went into full meltdown mode shortly afterwards with his whole “I’d love it” finger jab into the Sky camera – at which point, we all knew the title was United’s and Hansen was going to live to regret that quote for the rest of his life.