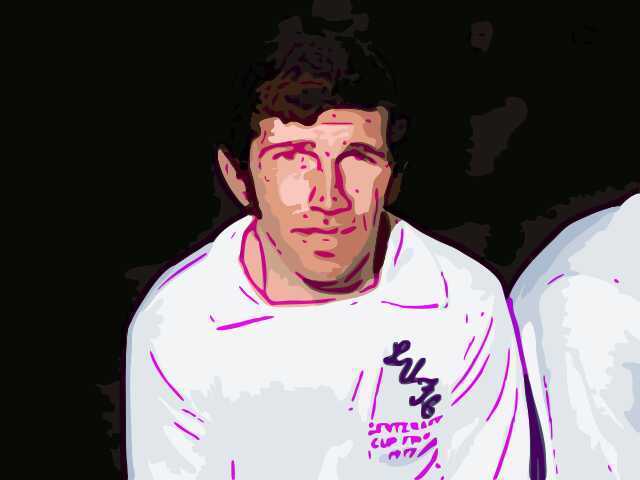 In 1984, Graeme Souness wrote, ‘No Half Measures,’ the first of three autobiographical tones, and in it, he described his toughest opponents, ie: those who kicked almost as hard and as often as he did. Top of the list was Johnny Giles of Leeds United and West Bromwich Albion fame.

According to Souness, Giles was much more than simply a hard player, though. He was the complete midfield player and the very heartbeat of the successful Revie-led Leeds team of the 1960s and 70s.

Souness is not alone in his opinion that Giles epitomised both the steel and the skill of those Leeds sides and through sheer hard work combined with copious talent, his drive helped lead both himself and his club to the very peaks of English and European club football.

Born in Dublin in 1940 to a footballing family, Giles’ first footballing hero was his father, Christy, who played for League of Ireland sides Bohemian FC and Shelbourne FC in the 1920s and 1930s. Giles himself started his career as a schoolboy with Stella Maris before being spotted and scouted by Manchester United.

First travelling to Manchester at the age of fourteen for two weeks’ training in the school holidays, Giles impressed sufficiently to be invited back. Eventually, leaving home at the age of sixteen, Giles signed for United for a £10 signing-on fee and immediately went into the club’s youth system.

At the age of just fifteen, he was first selected for the Manchester United ‘A’ team, which was in effect the club’s third side, but for the majority of his first few years at the club, he was part of ‘the Juniors’ – the club’s U-19 side that played in a local league.

Moving up through the ranks, Giles played for the ‘B’ team and then became a regular in the ‘A’ side. It was in February 1958 that tragedy struck the club and terminally affected all at Manchester United.

The Munich Disaster, in which eight players lost their lives when the plane carrying the club back from a European Cup game in Belgrade crashed on the snowy Munich runway, forever changed the landscape of the club.

As a young player at the club during this period, Giles was fortunately nowhere near the first team at the time and so wasn’t included in the travelling party. Subsequently, the long road back for the club included showing faith in youth and Giles was among the beneficiaries of this policy as promotion to the reserve team soon followed.

After being included in the first-team squad for a friendly game in early 1959, Giles finally made his breakthrough in a competitive setting for the first time when Tottenham Hotspur were the opponents and visitors to Old Trafford for a league game. As happy as he no doubt was to be making his competitive debut, the subsequent 5-1 defeat must have taken some of the gloss off Giles’ achievement that day.

A second appearance, this time against Stan Cullis’ Wolverhampton Wanderers side, soon followed, and then, to Giles’ own amazement, he received his first full international call-up. Reading the Daily Mirror whilst on a training break with United in Blackpool, Giles’ teammate, Joe Carolan, discovered that both he and Giles had been named in the Republic’s side to face Sweden.

Falling behind to two early goals, the outlook seemed bleak for the Irish but then came the moment that in Giles’ own words ‘changed everything.’ A cross from Irish player, Fionan Fagan, was punched clear by the Swedish keeper under pressure and fell to the feet of Giles, thirty yards from goal. Catching it sweetly on the volley, Giles struck the ball past the despairing keeper and hoisted the Republic back into the game.

Further Ireland goals brought about a famous 3-2 victory over the side that had finished World Cup runners-up just a year before and announced the real arrival on the main stage of Johnny Giles.

It was the first of 59 caps that Giles would win over a 20-year international career.

Over the next season and a half, Giles would become a regular in the Manchester United line-up, despite continuing apprehension regarding his diminutive build. At only 170 centimetres, or five foot, seven inches, Giles was thought by some to be of too slight a build to really make it to the top. It was this underestimation of the man that was to prove many an opponent’s undoing.

A serious ankle injury courtesy of a bad tackle in a game away to Birmingham City was overcome, and Giles continued on his upward trajectory, winning more Ireland caps along the way, and yet not absolutely everything was peachy.

Giles would later write that he enjoyed a less-than-perfect relationship with Manchester United manager, the legendary Matt Busby, as he felt that despite his progress Busby never quite totally trusted or believed in him. Giles had made a breakthrough at a reasonably young age, but he felt that he still needed guidance from time to time, and he needed encouragement, too.

Giles would write that just occasionally he felt that these qualities were not amongst Busby’s strengths as a manager and so whenever the inevitable dips in form that are commonplace in most players’ careers arose, he would be left to get on with things himself and find his own solutions.

It was around this time that changes were beginning to take place with regard to the money that players could make from the game. The maximum wage cap was still in existence at the time and no player could be paid more than a basic salary of £20 per week. There had been talks about raising the minimum wage to £30 a week or even abolishing it altogether, but then the Football League decided that there would be neither an increase in the maximum wage nor an abolishment, and that players’ income would be limited to £20 per week at most.

This decision prompted the players of clubs up and down the country to get themselves organised, and at one point the very real possibility of players going on strike existed.

Ultimately, the Football League backed down and the maximum wage was abolished. This led players – hypothetically at least – to be in a stronger negotiating position as they could argue for what they felt they were worth. In reality, however, the clubs still held the majority of power under the old retain system whereby they would hold the registrations of the players indefinitely who were thus pretty much obliged to accept whatever they were offered.

Johnny Giles was one of the new breed of players who were only too aware of their value and not afraid to say so. The Manchester United players collectively went to Busby who initially offered to increase everyone’s weekly salary to £25. When this was rejected by the squad, Busby agreed to another £5 and so United’s playing squad wages were pegged at £30 per week.

As a Republic of Ireland player, Giles knew how much players at other clubs were being paid and when he individually went to Busby to express dissatisfaction at another subsequent rise of just £5 per week, he made this point clear. Busby was not for bending, and Giles believed that the whole episode was another black mark against him at United.

On the field, Giles was also running into some difficulties. Writing in his autobiography the best part of half a century later, Giles traced his footballing dissatisfaction at Manchester United back to the early months of 1962 and a flu bug he picked up in that cold winter.

Unable to shake off the bug but still worthy of a place in the side, Giles found his form sliding over the second half of the season and he started to come under further pressure. Manchester United made it through to the FA Cup semi-finals where they found themselves drawn to play at Hillsborough against Tottenham Hotspur who had won the league and cup double just the previous season.

Giles, by his own admission, had a poor game that afternoon as the North London side ran out convincing 3-1 winners, and from that moment onwards he believed Busby never really trusted him again. The following season was a difficult one for Giles with him being in and out of the side repeatedly and, to his mind anyway, being constantly criticised by Busby and his staff throughout.

The FA Cup semi-final was reached again, and this time a victorious United side made it through to the final courtesy of a 1-0 victory over Southampton at Villa Park, with Giles playing a central part in proceedings. However, when Giles was dropped for the next league game it was far from clear whether or not he would be in the starting line-up for the Wembley final against Leicester City.

In the end, an injury to Nobby Stiles, who by now was Giles’ brother-in-law having married Giles’ sister, meant that Giles did indeed get to play at Wembley. Playing well in United’s 3-1 victory, Giles still felt he was living on borrowed time at United. The arguments with Busby about selection and contracts had taken their toll, and the cup success notwithstanding, Giles’ unhappiness continued unabated.

Giles started in the first game of the following season, a 4-0 Charity Shield defeat at the hands of League Champions, Everton, but when he was left out of the side for the opening league fixture a week later, Giles asked to go on the transfer list.

Writing many years later in his tremendous autobiography, Giles stated that far from the perception that Busby was a great man-manager, he in fact found the legendary boss to be a very poor communicator.

He was, Giles said, in total contrast to the man who would become his next manager for the following eleven years.

In the next part of our series, we will look at Johnny Giles’ part in the force of nature that was Leeds United in the Don Revie years.