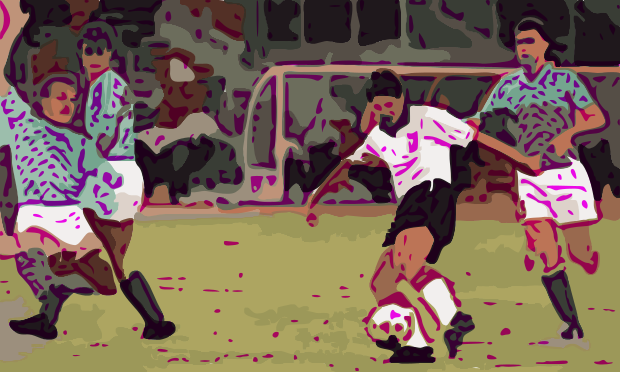 As of 2022, the current England side under the management of Gareth Southgate has been amazing to watch. Despite a 2-1 semi-final loss to Croatia in the 2018 World Cup in Russia and an agonising penalty shootout defeat against Italy in the Euro 2020 Final, this England team have got fans believing again and many consider the Three Lions as favourites for the 2022 Qatar World Cup in November.

But with all of that being said, let’s go back in time and review England’s performances during Italia 90 and how the Three Lions came so close to their first World Cup success since 1966.

England and the build-up to Italia 90

The 1980s was a difficult time for the England national team – it saw the Three Lions fail to qualify for the 1984 Euros, a quarter-final defeat to Argentina in the 1986 World Cup, where we witnessed the infamous ‘Hand of God’ by Diego Maradona, and losing every game in the Euro 1988 tournament, crashing out at the group stages.

Bobby Robson was in charge during this time and in spite of the last three tournaments ending in failure, there was optimism going into the 1990 World Cup in Italy. England finished 2nd in their qualifying group and put up impressive results including 5-0 and 2-0 wins against Albania as well as a 3-0 win against Poland at Wembley.

With the likes of Gary Lineker, Paul Gascoigne, Peter Beardsley, Chris Waddle, John Barnes in the squad, England was certainly not lacking in firepower and quality going into the tournament. However, the lack of goals in the group stages would almost be the Three Lions’ undoing as they were put in a group alongside the Republic of Ireland, the Netherlands and Egypt.

England’s first group game was against Jack Charlton‘s Republic of Ireland and despite Robson’s men making the ideal start with Lineker scoring in the first ten minutes, they couldn’t build on their lead and were pegged back by Kevin Sheedy’s goal in the 73rd minute. The England players weren’t able to retake the lead and the game ended in a draw.

Their next group match was against the Netherlands and despite the depth in quality the two teams possessed, neither side could break the deadlock and the game ended in a 0-0 draw. This meant that England went into their final group game against Egypt potentially needing a win as a draw might not be good enough to go through to the knockout stages.

In a tense game, the Three Lions managed to find an elusive goal through Mark Wright just before the hour mark to England top of their group with four points, as it was two points for a victory then, sending them into the last 16 of the competition.

England in the Italia 90 knockout rounds

Belgium would await them in the last 16 of the tournament, and the game would follow the same trend of a lack of goals. With the match ending 0-0 in normal time, extra was needed and in the 120th minute, Gazza’s chipped free-kick found David Platt, who smashed it first time into the Belgium net to send England faithful into raptures and go through to the World Cup quarter-finals.

They would face Cameroon in the quarter-finals and unlike England’s other matches, this game would explode into life with goals and crazy moments. After the Three Lions took the lead through Platt in the first half, Gascoigne gave away a silly penalty which was swiftly converted by Emmanuel Kundé to level the scores 1-1.

The Indomitable Lions then took a shock lead just three minutes later when Eugène Ekéké scored to make it 2-1 and bamboozle the Three Lions. But England found a way back when they were given a penalty themselves just seven minutes from time, which Lineker converted to equalise for Bobby Robson’s team and send the match into extra-time.

Just like in the last 16, England would once again seal the victory when the Three Lions were awarded another penalty in the 105th minute, Lineker stepped up to convert his second penalty of the game and send England to their first semi-final since 1966.

West Germany stood in England’s way in the semi-final and it was the West Germans who struck the first blow. After a goalless first half, Andreas Brehme scored at the hour mark to make it 1-0 and gave the Three Lions some work to do to get back into the game.

Lineker was yet again the man to step up for England as with just under ten minutes to go, the forward latched onto a bouncing ball to volley it past the West German keeper and into the bottom right-hand corner of the net, sending the England fans into pandemonium.

With the game ending 1-1 after 90 minutes, England faced extra time for a third consecutive knockout game, this time however there would be no goals as there was nothing to separate the two sides during the 30 extra minutes, and thus it would be decided on penalties.

The two goal scorers in normal time were up first as Lineker and Brehme made no mistake with their spot-kicks to make the score 1-1 on pens. Peter Beardsley was up next and he also converted his penalty to give England a 2-1 lead, but Lothar Matthäus managed to put his penalty away as well to level the score once again at 2-2.

David Platt was up next and scored his spot-kick to make it 3-2 to the Three Lions, but once again the West Germans pegged back with Karl-Heinz Riedle putting away his penalty to make it 3-3.

The decisive moment in the shootout came when Stuart Pearce shot his penalty straight at shot-stopper Bodo Illgner swinging the tide towards the West Germans, who took advantage of Pearce’s miss with Olaf Thon scoring his penalty to make it 4-3. England had to score to keep their World Cup hopes alive, but when Chris Waddle stepped up to take his spot-kick, he blasted the ball over the bar to send West Germany through to the final, and knock England out of the tournament.

West Germany would go on to win the tournament, beating Argentina 1-0 in the final, whereas England would finish fourth after their 1-0 loss to other semi-finalists Italy in the third-place play-off. Germany and England would play each other again in the semi-finals of Euro 96, with England losing again on penalties against the Germans as they also went on to win the tournament against the Czech Republic 2-1 in the final at extra time.

England’s woe and hope for the future

Following Italia 90, Germany would win another World Cup in 2014, beating Argentina 1-0 in the final, just like in 1990. In contrast, England wouldn’t reach another World Cup semi-final for 28 years when they reached the semi-finals in Russia 2018, just falling short against Croatia as mentioned in the very beginning.

In the years between 1990 and 2018, with the exception of Euro 96, England have been through heartbreak after heartbreak as they failed to progress beyond the quarter-finals of every tournament since Italia 90 and even failed to qualify for Euro 2008. But with the emergence of Gareth Southgate and the breakthrough of arguably some of the best England players we’ve seen since the ‘golden generation’, maybe Qatar 2022 could finally be the year England break their World Cup sorrows and bring football home for the first time since 1966.