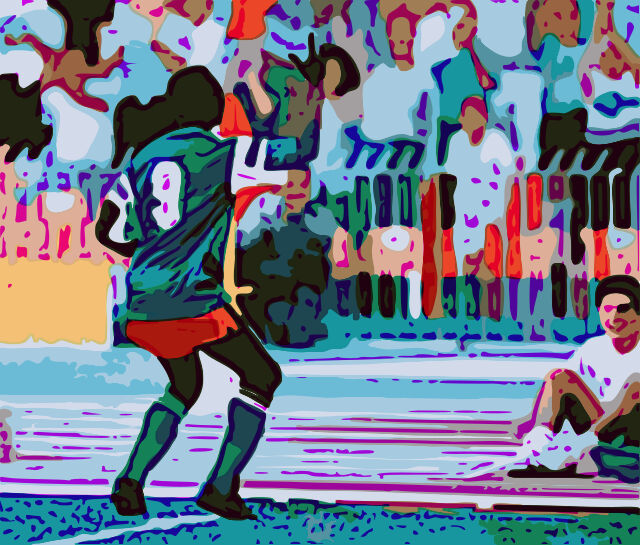 When I was a kid, I managed to get myself banned by my parents from watching Italia 90.

I cannot remember exactly at what point it happened – possibly the group stages – but I will never forget why.

I had been asked to post a birthday card for my cousin Louise as well as the deposit cheque for the family holiday – and to do this on the way to school.

Being an 11-year-old more interested in getting to the school playground as quickly as possible to get as much time in the morning kick about before the assembly bell, naturally I forgot. And then I forgot again. And again. Time must have moved fast because a couple of weeks (and Louise’s birthday) went past.

Realising that they were at the bottom of my school bag, I panicked and needed to get rid of the evidence. Something compelled me to open Louise’s card and there was a fiver in it – trust me, at that age in 1990 it felt like a lottery win so I pocketed it given that I was about to through both the card and the envelope addressed to somewhere in Scarborough in the bin.

My Dad must have sussed something was up when he didn’t receive confirmation that our holiday was booked or a thank you from his niece. A call went into the holiday camp and he was told no cheque had arrived – another call went into my Uncle Rog who also confirmed no card had arrived.

The heat was on – and when quizzed I opted for the strategy that was my go to all the way through to my mid-30s. Deny everything. Must have been the postman’s fault. I did my bit – what can I do if they didn’t deliver?

My Mum was a pretty shrewd character, to be fair, and she must have seen through me instantly – mind you, I suspect my Dad did too but had a less subtle approach to getting the truth which was easy enough for me to resist. Mum, on the other hand, she knew how to make me feel guilty enough that the truth would eventually be told and I suspect I was singing like canary by the time I returned from school that day.

After that, Sony Walkman headphones into my black-and-white portable TV and games were being followed as before.

Yet, so utterly bizarrely – out of respect to my Mum (who thought I had honoured my debt for the last three weeks – I turned down her invitation to watch the semi between England and West Germany with her on the proper TV. I didn’t even watch the damn thing undercover. THAT was the match I chose to do as I was told.

I was, and probably still am, an idiot.

If you ask most English people what the memorable moments of the tournament were then you’d probably hear Gazza’s tears, Stuart Pearce and Chris Waddle missing from the spot, Platt’s late winner and Gary Lineker crapping on the pitch against the Republic of Ireland.

Yes to all those, but as an 11-year-old watching his first proper tournament (Euro 88 passed me by as quickly as it did England) all these other star names who I had never seen before or heard of in many cases were catching my eye.

Well, star names and teams I should say – Cameroon kicked us off, literally. Argentina were maimed into defeat in the opening game. Carlos Valderrama’s hair and Rene Higuita’s antics made Colombia a lot of fun. Toto Schillachi’s manic eyes after scoring and that Roberto Baggio goal made the Italians cool.

And then there was Roger Milla.

When I started deciding what players I wanted to immortalise in poster form for our shop, Milla was so high on the list. And it had to be of him dancing in celebration of a goal in Italia 90.

I am sure you’ll agree – it looks pretty sexy.

But other than this iconic moment, what else made the Milla story so interesting?

Roger Milla is 70 in a few days time. It staggers me to think that a player who scored four goals in Italia 90 and then another single effort four years later in the USA 94 tournament is approaching 70.

There’s a simple reason for this, though – he was just a bit older than your average player when he played in both tournaments. Milla was 38 when he took centre stage in Italy and, superb maths here, 42 when he represented Cameroon in the United States.

How on earth did this happen?

Milla’s early years were spent playing league football in Cameroon. Like much in Milla’s life, things came late – he made the move to France at the age of 25 in 1977. Imagine a player that would go on to be known by almost everyone in football leaving the African leagues that late in life now – it just wouldn’t happen.

Valenciennes was his first destination where he stayed two seasons scoring six in 28 games. This got him a move to AS Monaco in 1979 – he stayed a season with two goals in 17 games possibly indicating why.

Milla saw in the new decade playing for Bastia – 35 goals in 114 leading to a move four years later to Saint-Etienne where his most prolific spell took place. He netted 31 in 59 before moving on again, this time to Montpellier. The goals continued – Milla scored 37 in 95 over three seasons before leaving Europe.

In all honesty, very few people in England were aware of any of this. This was the time before global coverage – French football in the 80s will have pretty much passed the majority by until possibly the back-end of the decade when Glenn Hoddle signed for Arsene Wenger at Monaco and Chris Waddle was enticed to Marseille.

But, it is unlikely your typical England fan of Division One football would have even heard of Roger Milla ahead of the summer of 1990.

Milla had made his Cameroon debut as a 21-year-old against Zaire in 1973 – unless I am mistaken, he played international BEFORE the Rumble in the Jungle, a legendary fight between Muhammed Ali and George Foreman, which took place in 1974. My point is, it was a bloody long time before Italia 90 happened.

25 years later, Milla retired from international football aged 36 – getting a proper jubilee send-off. The problem with such goodbyes is that they kind of need to actually be goodbye. After Cameroon qualified for their first World Cup in eight years, the country’s President Paul Biya was on the phone attempting to persuade their veteran striker out of retirement.

Milla was brought back to add experience to a raw, physical side who believed they could surprise a few people in the tournament.

They were not wrong – 1986 holders Argentina were battered into submission in the opening game. Francois Oman-Biyik got hang time Michael Jordan would have been proud of before heading home a 67th-minute winner under Nery Pumpido who, it is fair to say, didn’t see his tournament improve.

But the game was remembered as much for Cameroon’s, um, enthusiastic tackling as it was for the actual scoreline. They picked up two red cards – Benjamin Massing and Andre Kana-Biyik being dismissed in a tournament played in an era where you had to go some to get a red for a tackle. That said, the refs had been asked to clamp down a bit and in the first game, they followed that to the letter.

Milla entered as a sub in the 81st minute – no goals, but a famous win.

He entered the field of play earlier in Cameroon’s second outing against Romania. The game was goalless when he came on for Emmanuel Maboang in the 59th minute.

Milla followed a long ball, bounced off the Romanian defender and slotted home with his left foot.

It was time to dance.

Any fans who didn’t catch the celebration the first time didn’t have to wait long to see it again.

10 minutes later, Milla hooked the ball round the corner and followed – hoping for a knockdown. None came as the ball went over his strike partner’s head but Milla was on the move – and moving well for an old-timer.

He was the first one to touch the ball again, taking it past the defender before arrowing a right-footed finish into the roof of the net.

The first video doesn’t show the dance that well – so enjoy the second goal again with a bit more hip movement from Cameroon’s number 9.

The goals made Milla the oldest ever scorer at a World Cup – but he was not finished there.

Cameroon had qualified for the next round after just two matches and, understandably, weren’t completely at it or even at it at all next time out against USSR.

Milla was again sub but called into action in the first half as Cameroon trailed 2-0 and hoped he might be able to save them.

Not this time, the game finished 4-0 and all Milla got that day was a yellow card.

It was the Round of 16 clash with Colombia that moved Milla into legend status.

One minute into the second period of extra time and Milla picked up the ball on the half-turn from Oman-Biyik. At this point, there was still a bit to do.

He accelerated towards the area, skipped over a tackle and speared the ball past Higuita into the roof of the net with his left foot. It was truly a magical, game-changing goal.

Two minutes later, Cameroon cleared their lines. Higuita picked the ball up in the middle of his own half and, for once, did the simple thing of passing it short to a fellow player. Said player, clearly knowing that Higuita liked playing this far out, rolled it back – but, the ball was slightly off and undercooked forcing Higuita into trying to deal with it.

In a flash, Milla had gambled and won – stealing the ball and racing towards the penalty area and an empty net. As the keeper desperately tried to slide tackle from 6 yards away, Milla rolled it home. 2-0, and the corner flag getting some dance love.

Colombia did pull one back but the Indomitable Lions were off to the quarter-finals against England – the furthest an African side had progressed in a World Cup ever.

England were massively underprepared for what Cameroon had to offer – Howard Wilkinson, I believe, had told Bobby Robson that there was nothing to be worried about.

Well, when Milla came on at half time his side were trailing to a David Platt goal – and within 20 minutes the super-sub had won a penalty (given away by Gazza) which was scored and then laid on the second for Eugene Ekeke.

England were in trouble.

Then Gazza made amends, playing in Lineker who won a penalty which he converted – England’s first in something like a decade or so – and the game went into extra time. England sneaked through, another Lineker penalty.

Milla’s Indian summer in Italy was over – four goals and some magic moments was a great way to say goodbye this time, surely?

Sometimes, you just cannot give up. By 1994, Milla was plying his trade back in Cameroon and he was called up to the USA 94 squad.

There was to be no repeat of the Italian drama for Cameroon – they went out in the group stages. But, Milla did score – against Russia – meaning he was now an even older holder of the record, 42 years and 38 days old. Incredible.

It was merely a consolation in a 6-1 loss but Milla still showed good strength to hold off the defender before toe-poking home.

He finally retired from playing that December. And what a career it was.

I remember that summer of 1990 for various reasons – and one of the top ones is any goal scored on the school field being celebrated ala Roger Milla. You don’t forget things like that.

The Good, The Bad and The Beautiful: The Story of Former Wonderkid Dani’s Loan Spell at West Ham