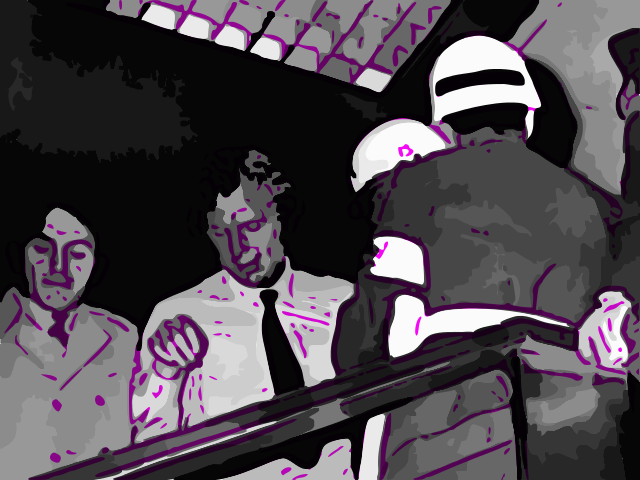 May 1970, Bogota, Colombia: A bracelet ‘goes missing’ from a Bogota jewellery shop and England captain Bobby Moore is accused of stealing it. The incident would become known as the Bogota Bracelet scandal.

England, as you might have heard, won the World Cup in 1966. Having lifted the Jules Rimet trophy, they automatically qualified for the 1970 tournament held in Mexico.

The general feeling was that Sir Alf Ramsey’s side were even stronger than they were four years earlier.

To help the team prepare for the Mexican conditions, Ramsey had arranged for two matches to be played at altitude in Colombia and Ecuador.

The squad were already in Mexico City and flew to the Colombian capital on May 18th, ready to step up their preparations.

It’s important to point out, exactly what happened is still unknown and many theories have been proposed. Actual accounts from supposed witnesses differed, but the general jist of events went something like this.

There was a gift shop in the hotel where England were staying, the Hotel Tequendama. As tourists often do, many of the players browsed the shop during their stay to find gifts to take home.

That evening, Moore and Charlton went into the shop together – looking for something nice for Charlton’s wife and Moore, being the sophisticated, stylish icon of the time, was a good choice to help choose.

Moore and Charlton browsed items in the display cases but nothing caught their eye, and they made to leave. At this point, the shop assistant Clara Padilla accused them of pinching a valuable bracelet that had been in one of the display cabinets.

Taken aback by the accusations, the two England legends immediately allowed themselves to be searched – hardly the first thing a guilty duo would do. Nothing was found.

Yet Padilla was adamant that the bracelet had been taken and Moore and Charlton were responsible.

Eventually, Ramsey was called as were the police. Statements were taken, apologies were received and it looked like the matter had been dealt with.

England played Colombia a couple of days later, winning 4-0 and both Moore and Charlton playing. As was the way with a more gentlemanly press back then, the incident was not reported in the papers so not to cause any further disruption to the World Cup preparations.

England travelled on to Ecuador and won 2-0 in Quita – they were then due to head back to Mexico via Bogota, which would involve a four-hour stopover. Physio Neil Phillips made the suggestion of taking an alternative route and avoiding Bogota, which was dismissed by Ramsey who felt such a move would suggest wrongdoing by his two key men.

England checked back into the same hotel. To pass the time before the connecting flight, the team got together to watch a film. During the activity, two plainclothes police officers came in and quietly arrested the England captain for theft.

A ‘new witness’ Alvaro Suarez had come forward saying he had seen Moore take the bracelet. Fast work from the British ambassador had stopped the skipper being arrested at the airport in front of the cameras.

Ramsey had to make a quick decision – it was clear Moore was not going to be free to leave Colombia immediately so he decided to move the team back to Mexico, leaving his captain behind.

Two FA officials stayed with Moore and, as you’d expect given the growing scandal, the British Embassy were on call.

As their leader was often in and out for various press and commercial reasons, the players had not really noticed Moore’s absence – once they were in the air heading back to base, Ramsey explained what had happened.

Moore was detained at Bogota Police Headquarters and formally charged, now facing prosecution for the alleged theft. Given the sensitive nature of this case, it was agreed that he could remain under house arrest rather than head to the cells.

He was allowed to train to stay in shape and, hopefully, be ready to join his team quickly.

The press were unable to keep this completely under wraps any longer and news broke back home – to public outcry.

There was never any doubt in the minds of the fans that Moore was innocent and foul play was involved.

The former Brazil coach Joao Saldhana spoke out, claiming that exactly the same thing had happened to them when they had stayed in the exact same location.

The England players were convinced it would be sorted quickly – yet Ramsey wasn’t as confident. He believed his captain to be completely innocent but had to prepare for the worst. Hunter was lined up to replace Moore in defence and Alan Mullery the captaincy option if Moore was not to return in time for the tournament.

Bobby Moore went in front of the judge and was quizzed for four hours. He maintained his innocence and that he was being set up. Padilla was brought forward to re-enact events and the judge was staring to see various inconsistencies in the claims made.

Eventually, she left in tears.

On May 28th, several days later, Moore was recalled to see the judge and given the lack of compelling evidence against him he was released. Ever the gentleman, he thanked the Colombians for their hospitality.

Moore was free to rejoin the team ahead of their opening game on June 2nd, against Romania. England won 1-0.

Ultimately, England would fail to defend their crown. They would lose 3-2 to West Germany in the last eight.

There is no doubt that the scandal of the Bogota Bracelet could have affected England earlier in the tournament but, following the defeat, it was felt that Ramsey’s substitutions plus keeper Banks going down with food poisoning ahead of the game led to England’s exit.

Incredibly, later that year the Colombian authorities opened the case again but, unsurprisingly, couldn’t find enough evidence to make a prosecution. Eventually, the case was completely closed in 1972.

As the years have gone by, no exact reason for the incident has become clear – general consensus was that it was a scheme to make money and far better to do it with a famous person. Others felt it was purely to disrupt the favourites winning the World Cup again and best to target their captain.

Either way, Moore was believed to be innocent and handled the situation with his usual calm and grace seen on the pitch.