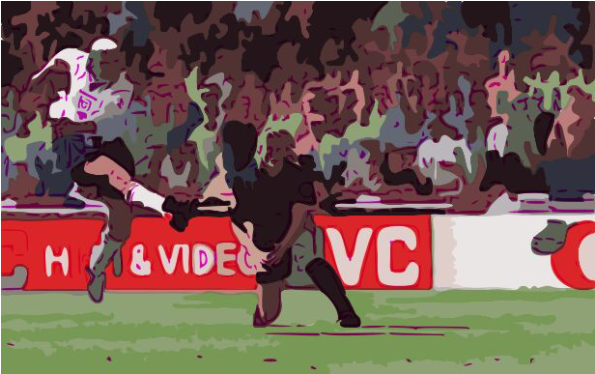 Paul Gascoigne a.k.a “Gazza” will forever live in the memory of football fans. Whether it be his stunning goals and amazing trickery on the ball, or his off the field issues which ultimately led to the end of his career, there’s no shortage of stories surrounding the life of Paul Gascoigne. So let’s take a look at some of the highlights from the life of “Gazza” and why he’s such a memorable player to this day.

Breaking through at Newcastle

Born and raised in the North East of England, Paul Gascoigne started his career at Newcastle United, where he captained the youth team to the 1984/85 FA Youth Cup. From an early age, it was clear that Gascoigne possessed a great amount of talent but he only made a couple of appearances in the first team towards the end of the 84/85 season.

The following campaign of 85/86 would see Gazza fully emerge onto the scene and show the Magpies faithful what he was about. He scored his first goal at home against Oxford United in a 3–0 victory on 21 September 1985 and claimed a further eight goals in the 1985–86 season. Newcastle finished 11th in the First Division that season and, at the end of it, Gascoigne was featured on the front cover of the Rothmans Football Yearbook.

In 1988, Newcastle’s then all-time top scorer Jackie Milburn stated in the BBC programme Football Focus that Gascoigne was “the best player in the world” and in February of the same year during a 0-0 draw against Wimbledon at Plough Lane, hard-man Vinnie Jones singled him out for attention, and in an incident that would become a much-publicised photograph, Jones grabbed him by the genitals as Gascoigne screamed in agony.

He was named the PFA Young Player of the Year and listed on the PFA Team of the Year in the 1987/88 season but in the summer of 1988, he was sold to Tottenham Hotspur for a record British fee of £2.2 million after unrest and instability led to the Magpies selling their star player.

In his first season at Spurs, Gascoigne guided Terry Venables’s team to 6th place in the 88/89 first division campaign, scoring a total of 7 goals in 37 appearances. In the following 89/90 season, Tottenham managed to rise up to 3rd place but had a large 16 point gap between them and eventual Champions Liverpool.

He was named BBC Sports Personality of the Year in 1990 and upon being awarded the honour, he said “I haven’t won anything in the game as yet, but the World Cup (Italia 90) did help to put England on the map”. Gazza was also given the award of being the Spurs Player of the Year.

More awards followed in the 90/91 season as Tottenham reached the 1991 FA Cup Final, with the semi-final, in particular, being very memorable. Spurs beat North London rivals Arsenal 3-1, a game which included a brilliant Gascoigne free-kick to set up a final between Tottenham Hotspur and Nottingham Forrest.

However, Gazza’s final would only last 15 minutes as he committed a dangerous knee-high foul on Gary Charles and ruptured his own cruciate ligaments in his right knee, eventually being forced off on a stretcher.

Gazza was named in the PFA Team of the Year for the 90/91 season as Spurs won the 1991 FA Cup 2-1 in extra time. Due to Tottenham having a large amount of debt, Venables had to sell Gascoigne to Lazio that summer for a fee of £8.5 million. However, because of Gazza’s injury in the FA Cup final, as well as suffering another injury at a nightclub on Tyneside it wouldn’t be until the summer of 1992 when Gascoigne would finally make the move to Italy.

He missed the entire 91/92 season and the saga over his proposed transfer to the Italian outfit dominated the tabloid press throughout 1991, often overshadowing the key national news of that time – including namely the recession and rise in unemployment that it sparked.

When Gazza finally made his move to Lazio in 1992, the final fee was around £5.5 million, so significantly less than what was originally agreed. The move didn’t get off the best of starts as he was beset by negative media interest, which was not helped by the numerous occasions he punched reporters, and the time when he belched down a microphone on live television.

Although he was well received by the Lazio fans, he was rather resented by the club’s owner Sergio Cragnotti Gascoigne greeted him by saying “Tua figlia, grande tette” (roughly translated as “Your daughter, big t***”).

Gascoigne’s form was inconsistent in his first season due to being injured for the whole season prior, but by the end of the campaign, he had endeared himself to the Stadio Olympico when he scored in the 89th minute to equalise during the Rome derby against A.S. Roma. Lazio finished 5th in the 92/93 season, which was a success as it meant qualification for European football for the first time in 16 years.

Before the start of the 93/94 season, Gazza was badly out of shape and told by manager Dino Zoff that he needed to lose weight or he would be dropped from the first team. Gascoigne did just that and shed a lot of excess fat. However, during a spell out with injury, he returned from a holiday of recuperation overweight and he reportedly stated to Zoff, “I told you not to send me on holiday, Signor Zoff!”

Gascoigne would go on to score six goals in 43 appearances for the Eagles as he was disgruntled with new head coach Zedenek’s stern fitness approach, and both club and player decided to part ways at the end of the 1994/95 season.

Gascoigne was first called up to the senior England squad by Bobby Robson in a friendly against Denmark in September 1988, and having got his first goal for the Three Lions against Albania in April 1989, he got his first start against Chile in the following game and was able to keep his place for most the games in the lead up to the 1990 World Cup.

Having never started a competitive game for England prior to the tournament, Gascoigne started all three group matches and provided the assist for Mark Wright’s winner against Egypt, as the Three Lions topped their group. Gazza also provided another assist in England’s last 16 tie against Belgium, where his chipped free-kick found David Platt, who volleyed the ball into the net.

He was then at the centre of attention in the quarter-final against Cameroon when he gave away a penalty, which they scored. But in extra-time, he provided a successful through-ball pass from which Gary Lineker won and subsequently scored a penalty, which proved to be the winning goal.

England then played West Germany in the semi-final where, having already been booked in the quarter-final, Gazza was booked for a challenge on Thomas Berthold, meaning he would miss the final if England went through. Television cameras showed that he had tears in his eyes following the yellow card and made Gascoigne a highly popular figure with the sympathetic British public.

The match ended in a penalty shoot-out, which the Germans ultimately won after Chris Waddle and Stuart Pearce missed their spot-kicks.

After missing the 1992 Euros due to injury, which England failed to get out of the group stages, Gascoigne returned to fitness to face Norway in qualifying for the 1994 World Cup. He responded to a Norwegian television crew’s request to say a few words to Norway, by saying “f**K off Norway”, a remark he was forced to apologise for afterwards.

Despite scoring twice in another qualifying match against Turkey, England failed to make it to the 1994 World Cup in the USA.

Next up was Euro 96, and since England were the host nation, there was no qualification process needed. But in their friendly matches before the tournament, numerous England players were photographed on a night out in Hong Kong in which Gascoigne and several others had drinks poured into their mouths whilst sitting in the “dentist’s chair”.

After drawing 1-1 in England’s opening game against Switzerland, the Three Lions beat Scotland 2-0 in their next group match, which featured an iconic celebration from Gazza. After scoring a brilliant goal, which saw Gascoigne flick the ball over Colin Hendry with his left foot, and then volley the ball into the net with his right foot, he celebrated with the “dentist chair ” celebration in reference to the incident. Gascoigne lay on the ground as if he were sitting in the dentist’s chair, and teammates sprayed water from Lucozade bottles into his open mouth.

England then dispatched the Netherlands 4-1 to advance into the knockout rounds, where they would play Spain in the quarter-finals. The game went to penalties after it was 0-0 in normal and extra-time before winning the shootout 4-2, with Gascoigne scoring the decisive penalty.

England drew 1–1 with Germany in the semi-finals, and Gascoigne missed the chance to win the game in extra time when he came inches away from connecting to an Alan Shearer cross yards in front of an unguarded German net. England lost to Germany in the resulting penalty shoot-out, with Gareth Southgate missing England’s sudden death penalty.

When Glenn Hoddle took charge of England in 1997, Gascoigne was a regular and put in a disciplined and mature performance to help England secure the 0–0 draw that was enough to take them through to the tournament.

However, following qualification, the tabloids would publish pictures of Gascoigne eating kebabs late at night with his DJ friend Chris Evans. With the final squad announcement a week away at the time, Hoddle was disturbed by this and decided not to pick Gascoigne in the final squad.

Having heard the announcement, Gascoigne wrecked Hoddle’s room in a rage before being restrained. Having won 57 caps and scored ten goals, Gazza would never play for England again.

The end of a dwindling career

After a successful spell at Rangers, winning league titles and Scottish Cups, Gascoigne then went on to play for the likes of Middlesborough, Everton and Burnley. Although he still showed flashes of brilliance and goal-scoring, his injury record and his off the pitch problems with depression and alcohol meant his career would slowly fade away.

His personal issues would continue to affect him long after his playing days, as he continued to battle his mental health, alcohol addiction and legal problems in the years that followed.

It proved to be a sad end to the career of one of England’s most gifted and exciting players. Gascoigne lived a lifestyle of a rockstar and had the abilities to back it up, but it ultimately led to his own downfall .It’s highly unlikely we’ll see a character such as Paul Gascoigne in football ever again.

The Good, The Bad and The Beautiful: The Story of Former Wonderkid Dani’s Loan Spell at West Ham

Les Sealey and me