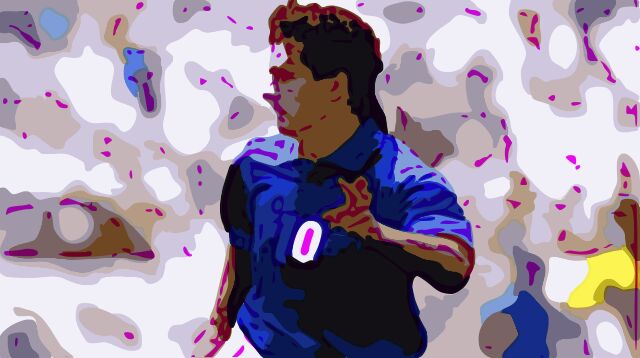 This article originally featured on Tale of Two Halves back in September 2018.

Football has a strange relationship with unusual hairstyles. By their very nature they’re either loved or loathed, what should be the most trivial part of an opinion of a footballer yet the part that provokes the strongest reactions. Some can be so well-received they make neutrals into supporters, think Romania in 1998. Others can anger even the coolest of heads, think literally every one of Paul Pogba’s haircuts.

But only one has ever been so well-known and loved that it became holy.

Our next entrant to our Icons in Italy series is of course, ‘Il Divin Codino’ (The Divine Ponytail), Roberto Baggio.

The only man to have a free-kick game as legendary as himself, Baggio’s Magical Kicks was a fundamental part of the mid-to-late 2000’s internet. Everyone, from kids spending all weekend trying to collect as many cups as possible, to bored office workers, no-one could resist the feeling of pinging in a beautiful, curving free-kick like the great man himself. Hours were lost at a time, irresistibly drawn to the screen much like the world was in the 90’s when Baggio was doing the real thing.

Roberto Baggio was born in 1967 in Caldogno, and joined nearby team Vincenza in 1980, where his talent would lead him to the senior team two years later, aged 19. The fact he is the sixth of eight children makes it even harder to believe he is no relation to future international teammate Dino Baggio, but Roberto’s brother, Eddy, also had a career in football spent mostly in Serie B.

Roberto however, would be destined for greater things and made his debut in Serie C in June 1983. He became a key player in Vicenza’s promotion to Serie B in 1984-85, scoring 12 goals and being named Serie C Player of the Year.

In May 1995, Baggio’s terrible luck with major injuries began, as he ruptured not just one, but both anterior cruciate ligaments and a meniscus while lunging in for a tackle. At 18, his career threatened to be over already. That was until Fiorentina, who planned on signing the youngster at the end of the season, went ahead with the transfer regardless and paid for his surgery. This was testament to the club’s faith in Baggio and the huge potential he had shown already in the lower leagues.

On Fire in Florence

In the summer of 1985 he completed his transfer to Fiorentina for £1.5 million. His first season was spent slowly recovering from a number of injuries, and featured only occasionally in the Coppa Italia. He didn’t make his Serie A debut until the following season.

Just as he started to make himself known in the first-team injury struck again, requiring another knee operation. Baggio needed 220 stitches as surgeons essentially rebuilt his knee, and lost a staggering 12kg. Incredibly, he returned, and in May 1987, he scored his first league goal, a free-kick of course, saving Fiorentina from relegation.

Saving your team from relegation with your first goal, as well on your return from your third knee operation by age 20 isn’t a bad way to become a cult hero overnight. Even better is leading your club to seventh and a UEFA Cup spot. Roberto Baggio did just that in the 1988-89 season, scoring 24 goals in the process. His 15 league goals lead him to third in the top-scorer charts and with his injuries behind him for now, his reputation in Florence blossomed.

After finishing second in the Serie A goals chart to Marco Van Basten, he led Fiorentina to the 1990 UEFA Cup final but his side were eventually beaten by Juventus, who finished second to an AC Milan side who boasted the likes of Van Basten and Ruud Gullit. His performances had caught the attention of the cup champions, he was now regarded as the best number ten in the league alongside Diego Maradona (with some considering him even better at this point).

That summer, Baggio accepted a world-record transfer of £8 million from Juventus. In a scene not witnessed since, Fiorentina fans took to the street in a full-scale riot in response to the transfer, which left 50 people injured. The city was in denial, Florence’s golden boy had left them. He had saved them twice from relegation and took them to within touching distance of a European trophy, and a factor in the panic must have been the fear of where they would now go without him.

1990 was also the year that Roberto Baggio lit up the World Cup with a moment of magic for Italy. Despite being benched for most of the competition, he still produced one of the finest solo goals in World Cup history. In a group match against Czechoslovakia, he picked up the ball on the left, before playing a one-two with Giuseppe Gianni, then cutting inside, drifting past tackles with an elegant ease which his game personified, then fainting past the last defender and finishing clinically. A goal which words don’t do justice, feel free to watch down below:

Baggio and Italy bowed out on home soil in the semi-finals on penalties against Argentina and claimed the bronze medal against England.

Back in Serie A, he hit the ground running for his new club, with 14 goals and 12 assists, a bright spark in a dull season where Juventus finished seventh.

1992/93 would be Baggio’s best season, domestically. He started off being appointed the captain. He won his only European trophy with the UEFA Cup and scored 30 goals in 43 appearances in all competitions. His goal tally for a number ten is made all the more impressive considering that Serie A was regarded as the best league in the world with the toughest defences at this point.

At 26, Baggio was firmly at the peak of his powers, playing a style of football which would mould his legacy. He personified elegance, everything he did was made to look easy. Moments of sublime skill were subtle, a deft touch to spin a defender, a feint to open a gap for a curling finish, everything looked so simple when, in reality, there was no-one else in world football who had such mastery of the ball. His vision was such that a simple ten-yard pass became a perfect ball to split open Italy’s finest defences. He re-invented and re-popularised the number ten/second-striker role in Italy and became the inspiration for other entrants to our Icons series including Francesco Totti.

The quotes around him in this era summarise who highly-thought of he was. Brian Laudrup said of Baggio:

“He’s without a doubt the most skilful number ten in the modern game, the archetypal playmaker, if you like, who can create chances and score goals.”

“He’s fantastic. You know that I have always played with many great footballers but nobody like him, so clever, such a good persona and such a strong player.”

“One of the greatest ever.”

Off the back of winning the 1994 Ballon d’Or, Roberto Baggio was on top of the world and a giant of world football heading into the 1994 World Cup. Italy have always been a slow-starting team at World Cups, and 1994 was no different. Baggio and his country were expected to storm the group stage but instead stuttered with two 1-0 wins and a draw.

In the knock-out rounds, however, Baggio and Italy roared into life, scoring both goals against Nigeria after his side had gone down to ten men and trailing 1-0. He scored the winner in the quarter-finals against Spain, then another double in the semi-final as they beat Bulgaria 2-1.

The final against Brazil loomed, and Baggio was first on the team sheet, despite pulling a hamstring against Bulgaria and playing with painkilling injections. Against an unpopular Brazil side, the match went to penalties, with Franco Baresi and Daniele Massaro missing their spot-kicks. What followed was one of the most famous and heartbreaking moments of World Cup history. Baggio blazed his effort over the bar, sealing Brazil’s victory over Italy, with the penalty becoming what he himself described as the worst moment of his career and one which would haunt him for years.

In 1995, Baggio moved to AC Milan, and after two average seasons, he moved to Bologna. In Bologna, his career was given a second wind as he scored 22 goals in 30 Serie A games, which prompted Inter to give the 31-year-old a final big move.

But, his powers were dwindling and with injuries hampering him as the seasons went by, his journeyman career led him to Brescia where he spent his last years. Roberto Baggio was still a force to be reckoned with despite his age, reaching double figures in all four of his seasons for Brescia, with 12 goals in his last season in 2003-04, aged 34.

Whilst he never reached the same heights as he did pre-1994 World Cup, Roberto Baggio remains perhaps the most popular and influential player in Italian football history. There are few that can dislike a player who symbolised all that is beautiful in the beautiful game. He is a very deserved member of our Icons in Italy series the only one who has an extra seat for that beautifully ratty ponytail.