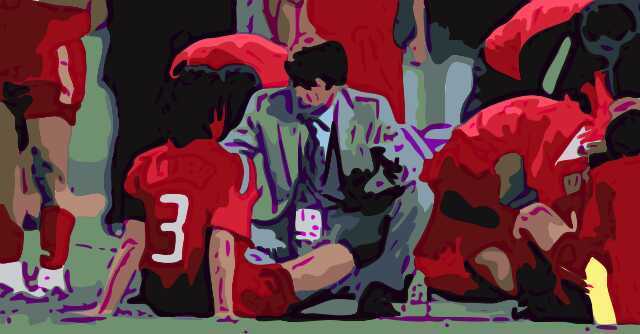 Ömer Hayyam is an Islamic scientist, who spent most of his life serving under the Great Seljuk Empire, around the 11th Century. Science was not his only trade, as his poems still find a way to echo.

“Lies flee from the truth, darkness flees from the light. Sun’s lone, but it shines. Truth’s destined to be alone. Crows fly in packs, eagles fly sole.”

That verse was quoted by Şenol Güneş in December 2015. Managing the Turkish Super League powerhouse Beşiktaş at the time, Güneş was well prepared to drop some smart words for those who would be interested. (A black eagle being the symbol of Beşiktaş, also “Güneş”, his surname means “sun” in Turkish).

After leaving his former side, Bursaspor, without any silverware, the future Beşiktaş manager answered some of his critics at a press conference. The conference started with Güneş’ criticising members of the media, as he would proceed to call them out for their so called “disrespect”, both to his players and himself.

He also mentioned that if his players were disrespected, he would take this personally. He mentioned Gökhan Töre, a player who was charged with the usage of a slang word of some sort, by Bursaspor’s manager Ertuğrul Sağlam. This would come, approximately two years after Töre drew a gun to his national teammates, Hamburg’s Hakan Çalhanoğlu and Leverkusen’s Ömer Toprak, when the group was gathered to play EURO ’16 Qualifiers.

Then Güneş chose to criticise the referee and also stated that he was not hurt as some Bursaspor fans threw his one year service in the wind, ungratefully.

Nearly 7 years later on from that day, Güneş returned to Beşiktaş in October 2022, where he describes as his home. A home that he left once before in 2019, when he went to manage the National Team. A social media frenzy that was created by his “homecoming” points out to the strong and intimate bond that Beşiktaş fans have with him. But this bond may seem irrational from time to time, to those who are not familiar with his milestone- filled career.

Maybe it’s his 17/18 CL campaign, where Beşiktaş managed to be the first Turkish side to qualify from a Champions League group unbeaten.

Maybe it’s the proud and secure display that he presents in the dugout, fueled by his Mr. Know-it-all attitude.

Or was it his longstanding association with the National Team?

Güneş’ first spell with Turkey’s National Team began in 2000, which saw a golden period for the nation in football terms begin. Galatasaray had just won the UEFA Cup under Fatih Terim beating Arsenal after a nerve-wracking 120 minutes, via a penalty shootout.

Another glorious moment followed for Turkish Football,  was when Güneş managed to get Turkey to the 2002 World Cup Finals. That would be their second time at the Finals, with their last appearance coming in the 1954 tournament in Switzerland. They had earned the right to be in Brazil for 1950 edition, but the Turkish Football Federation couldn’t gather the resources required to send a squad overseas.

A core of current and former Galatasaray players created the solid foundation that Güneş’s World Cup group required. The two squads shared twelve players in total, while four of that group had already had a chance to carry their talents to the bigger stages of Europe.

Hakan Şükür, Emre Belözoğlu and Ümit Davala made their way to Italy to play for the eternal city rivals Inter and A.C Milan (Şükür & Belözoğlu for Inter, Davala for Milan) while Tugay Kerimoğlu completed a move to England to play for Blackburn Rovers.

A year before the World Cup, Turkey hosted EuroBasket 2001, where they managed to make it to the final. Even though they lost to the 8-time champions Yugoslavia, it was the first significant achievement that any Turkish National Team earned in a major tournament, in any line of sport. Combined with Galatasaray’s previous success, things were starting to heat up in Turkey. For the first time ever, the country of 65 million people saw enough evidence leading them to believe that their teams are capable of competing with the best nations in sport.

“Megastar” (as his fans call him) Tarkan recorded the soundtrack “Bir Oluruz Yolunda”, (meaning “United For You”) as Turkey travelled to Korea for their group matches.

Turkey were drawn into Group C, alongside the Republic of China, Costa Rica and Brazil. While Brazil was seen as the favourites to win the group, second place was certainly up for grabs. It was the biggest occasion that any Turkish team had ever participated in.

Motivated and set up well enough to avoid being overwhelmed by the quality Brazil possessed, Turkey proved a challenge for the strong favourites. After a half of football, Brazil’s star studded front three, Rivaldo, Ronaldinho and Ronaldo, had been perfectly contained. They even took an unexpected lead at the stoppage time of the first half, through a brilliant volley by Hasan Şaş at the end of Yıldıray Baştürk’s perfect lob pass behind Brazil’s back line.

They were not able to make the most of their lead, however, as Brazil equalised through Ronaldo at the start of the second half. Then Rüştü Reçber, brilliant throughout the game, kicked it short straight to Luizao in the 87th minute, who was brought down by Özalan in the box. The centre-back’s actions resulted in a penalty and a red card. Rivaldo scored the decisive penalty and Turkey left the game in disbelief at the opportunity that they have squandered.

Their second challenge in the group stage was Costa Rica. The precise feet of Emre Belözoğlu put Turkey in front. But again, they couldn’t see out the game, punished by an 86th minute goal by Winston Parks. That left them with just one point from the first three games.

They thrashed China 3-0 in their last game of the groups, with goals from Hasan Şaş, Bülent Korkmaz and Ümit Davala. It was through another thrashing that Güneş’s squad got the ticket for the knockout stages on goal difference, as Brazil beat Costa Rica 5-2.

A favourable draw may also come in the form of an intimidating one. That was the challenge that Turkey came across after the group stages, matching up with one of the co-hosts, Japan. Güneş’s team continued to hold on to their solid defence, which produced another clean sheet. That clean slate turned into a glorious victory that pushed Turkey to the quarter-finals, when Ergün Penbe’s cross from a corner, met with Davala’s head in the 12th minute, to record the only goal of the game.

There was no stranger ground than this for that group. Nearly fifty years had passed since their last appearance in this particular arena. Yet they had managed to establish themselves as one of the Top 8 teams in the world.

A tougher challenge came in the next round, against the 2002 AFCON Finalists, Senegal.

In the match, El-Hadji Diouf, who would sign for Liverpool after the tournament concluded, was perfectly contained by the duo of Korkmaz & Özalan. At the other end of the pitch, striker Hakan Şükür, summoned a performance described by the commentator as “dropping down to the 3rd gear”.

Şükür completely mishit two sitters inside Senegal’s box and the game was goalless after 90 minutes. But the shiniest of the golden goals was scored by İlhan Mansız in the 4th minute of the first extra time period. An early cross from Ümit Davala, met with the most gentle of touches from the Beşiktaş striker, who was a late substitute for Şükür, found its way past the goalkeeper Tony Slyva.

Maybe this was a fairytale after all.

Could the dark horses beat Brazil?

Semi finals of a World Cup, intimidating even to the regulars of the scene. On top of that, it had to be against Brazil. Here was a team that had won the tournament more times than Turkey had appeared at it.

Turkey had nothing to lose, against Brazil’s everything. This took some of that intimidation from Turks and placed it onto Brazil’s broader shoulders.

Brazil’s goalkeeper Marcos’ amazing stretch was the only thing to keep Alpay Özalan’s header out. At the other end, Reçber stood tall against the Brazilian attack His saves seemed to be conjuring questions in the Brazilian players’ minds.

But as The Turks say; “Grasshopper hops once, hops twice…”.

Ronaldo’s low driven shot, combined with Reçber’s mistake, resulted in Brazil opening the scoring, with Turkey now playing catchup with their opponents. Güneş’s men tried to equalize while they escaped further punishment. But a breakthrough couldn’t be achieved and Ronaldo’s goal proved decisive.

A lesser challenge nonetheless, Turkey faced the other co-hosts South Korea to claim 3rd place.  Şükür wrote his name into the history books by pressing the Korean defense, leading to the fastest goal in World Cup history. The teams went back and forth in a friendly manner, but Şükür’s goal was the difference between them, asTurkey claimed bronze with a score of 3-2.

Without question, they had overachieved. But somehow it felt something was left undone.

Güneş endured a spectrum of criticism, and even his choice of sweatpants instead of a suit on some days in the dugout was denounced as “inappropriate” for  “Turkey’s Manager”. Two years later, after losing a playoff at the hands of “underdogs” Latvia for Euro 2004, and failing to participate in the 2006 World Cup, Güneş left his post to manage FC Seoul in Korea.

Hakan Şükür took to politics after his glorious career ended. He served as a member of the Turkish Parliament. But his close relations with Fethullah Gülen, an Islamic cult leader, led to Şükür having to flee from the country. A similar fate knocked on the door of Enes “Freedom” Kanter also.

In the land of controversies, the stars aligned in 2002. Turkey haven’t participated in any other World Cup since then. Their only significant presence in a competitive tournament came with Terim’s Lions in Euro 2008, reaching the semi-final stage once again.