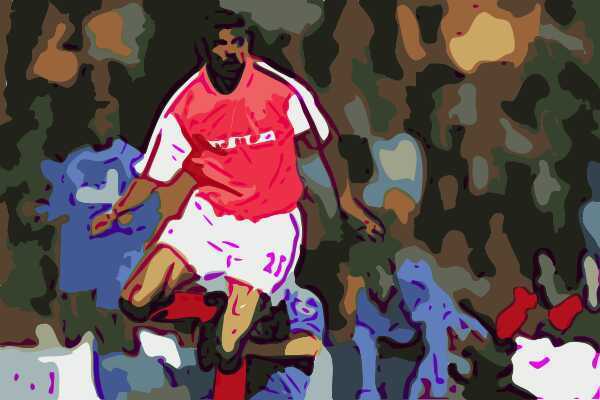 I went to every league match of Arsenal’s 1999/00 season. But one day in particular provided the undoubted highlight of the long campaign.

It all seemed to unfold in slow motion in front of my eyes as I stood in the lower tier of the East Stand at Chelsea. Arsenal’s enigmatic centre-forward from Nigeria, was again looking to work some magic with his size 15 boots. After some trickery with his eyes, and a twist of the hips, he drew back his right foot.

Kanu had already earned a place in the hearts of Arsenal fans since his controversial debut in February 1999. Signed for £4.15 million from Inter, the 22-year-old made headlines for the wrong reasons when he set up Marc Overmars for a winner against Sheffield United in the FA Cup, completely ignoring the unwritten rule of returning the ball when the opposition kick it out so that a player can receive treatment.

Arsenal replayed that match – the “same old Arsenal, always cheating” chant ignoring this completely – yet Kanu had given us an indication of what he was all about. If his own teammates did not know what he was up to, then what hope did the opposition have?

As the 1998/99 season progressed to its exciting conclusion, the impact of Kanu at Arsenal grew and grew. A memorable dummy that turned Jaap Stam inside out as Nicolas Anelka scored at Old Trafford; crucial substitute performances against Derby in the FA Cup, and Sheffield Wednesday and Tottenham in the league; a stunning backheel flick against Middlesbrough.

Arsenal may have agonisingly missed out on winning both the league and cup, yet it appeared as if this would be the start of a beautiful relationship between Kanu and the club. “He’s big, he’s black, he’s had a heart attack,” was the politically incorrect chant coming from the terraces at the time, acknowledging Kanu’s heart defect that had seen him undergo surgery in 1997.

Soon Kanu’s chant would receive a makeover: “Chim chiminey, chim chiminey, chim chim cher-oo, who needs Anelka when we’ve got Kanu?” The song may have improved, but the departure of Anelka was a body blow to the club. Thierry Henry and Davor Suker had arrived in the summer, yet there was no doubting that a key component of Arsenal’s success had left for Real Madrid.

The team only lost four league matches the previous season. By the time Arsenal visited Stamford Bridge in October 1999, they had already suffered defeats against Manchester United, Liverpool and West Ham. The loss at Upton Park had seen Patrick Vieira sent off and then subsequently banned for six matches after spitting at Neil Ruddock.

Stamford Bridge would certainly not be a place for the faint-hearted. In the previous two seasons, the matches between the two clubs had seen them run up a total of three red cards and 40 yellows. Running feuds between Graeme Le Saux and Lee Dixon, as well as Chris Sutton and Martin Keown, hardly helped the situation.

Vieira would be suspended, although Arsenal could at least count on the return of Emmanuel Petit, who had been out for ten weeks due to a knee ligament injury. Partnering Ray Parlour in central midfield, Petit’s absence had been a big factor behind Arsenal’s stuttering start to the season.

Chelsea had lost two league matches on their travels, but it was a different story at Stamford Bridge. Four wins, no goals conceded, and a 5-0 win over Manchester United highlighted the task ahead of Arsenal. A win for Gianluca Vialli’s team would see them leapfrog the visitors, with Chelsea also holding two games in hand due to their involvement in Champions League qualifiers.

Arsenal had not lost a league match at Chelsea since September 1995 – a run that would continue to August 2005 – but for long periods of the match, it seemed inevitable that Chelsea’s fine home form would claim another scalp. The visitors huffed and puffed, yet it was Chelsea who would land two body blows that threatened to plunge Arsene Wenger’s team into an autumn crisis.

I hadn’t travelled to the match with a great deal of hope. Despite our good record against Chelsea (excluding the Mickey Mouse Cup), their home form and our double hangover from the previous season were playing on my mind. With no Vieira, and Petit unable to complete the 90 minutes, we were strangely vulnerable for a team that had competed so well during the last campaign.

Losing away is never a pleasant experience. You feel so isolated, as the vast majority of the stadium erupts in a wall of noise and celebration. Avoiding eye contact with anyone in the home end is important; seeing someone giving it large with a big smile on their face often leads to an exchange that never ends well.

The match turned out to be as lively as many had predicted. Eight yellow cards, including Dixon and Suker earning theirs for fouls on Le Saux, were a clear indicator that even with many non-English players this was still a London derby contested between two teams that really did not like to take a backward step against each other.

Le Saux would manage to have a pop at many of the Arsenal fans that had been giving him stick for his battles with Dixon. When Tore Andre Flo headed Chelsea in front after 39 minutes, Chelsea’s left-back celebrated the goal with his teammates whilst sneakily flicking us the finger as a bonus. Just seven minutes into the second half, it looked as this was turning into Le Saux’s perfect day.

The left back’s cross led to Dan Petrescu heading Chelsea into a 2-0 lead, and as Stamford Bridge rejoiced, immediately your mind starts to wander. Are they going to hammer us 5-0? Can the smugness levels of these home fans go any higher? I’m hating this. I feel numb. Losing to Chelsea is horrible. At least I’m not getting drenched by this pouring rain.

But this was the era of Chelsea’s self-doubt when it came to fixtures against Arsenal. As soon as Kanu planted the first seed, Chelsea began to drown in the downpour. With 15 minutes to go, Arsenal’s Nigerian forward intercepted a Marc Overmars shot level with the penalty spot. Toe-poking past Ed de Goey, his shot skidded into the back of the net. Game on.

You could almost smell the anxiety coming from the previously jubilant home stand near me, with a similar amount of belief spilling out of the away section. As the volume grew, Arsenal streamed forward. Overmars crossed from the right and Kanu beautifully cushioned the ball into his stride. Substitute Henry cleverly blocked off Marcel Desailly, as Kanu thumped a right-footed effort past the helpless de Goey.

Explosion. Bodies everywhere as the relief felt from the away end escaped. With seven minutes to go, I would have happily taken the point. No reason to be greedy; we had been on the back foot for most of the afternoon. Drawing at Stamford Bridge would be a decent result.

And then in the final minute it happened. A quite unbelievable winner from an unbelievable player, from a position that he had no right to score from. As Kanu chased Suker’s awful pass out to the left flank there was really no danger. Even when Kanu charged down Albert Ferrer’s clearance, Chelsea’s defensive unit seemed to have things covered.

But De Goey made a fatal error. Leaving his line, he confronted Kanu as the ball plugged by the byline, halfway between the corner flag and the penalty area. Suker and Overmars waited in the area, calling for the ball. Yet the unpredictable Kanu had very little intention of picking out a teammate.

Giving De Goey the eyes, Kanu dragged the ball inside Chelsea’s keeper with his right foot, the ball rebounding off his left leg and into the area. With De Goey out of action, a square ball to Overmars or Suker was the obvious option. “Cross it,” I screamed from roughly twenty yards away. Not the stupidest thing I’ve ever said in a stadium. After all, Kanu was only a few yards in front of the byline.

With Desailly and Frank Leboeuf in between him and the goal, surely my advice was the best option? Possibly to mere mortals, yet on this day Kanu was on a different planet. Pulling back his right foot, he fired a shot that skimmed over the heads of Chelsea’s French duo. The ball hit the back of the net and after a brief moment of disbelief, pandemonium followed.

Bodies everywhere. Limbs, I believe the kids call it now. A cocktail of frustration, resignation, hope, and joy was released into the atmosphere as the Arsenal players celebrated in front of us. How had he done that? Why did he even try that? What has just happened?

Once the game kicks off you try and recompose yourself. You wonder if there is time left for an equaliser. But secretly you know/hope that Chelsea are done. You can’t bounce back from that. The final whistle goes and the party starts again. You don’t want moments like this to end.

Your mind naturally shifts to dragging yourself away from this blissful time. Immediately there is a concern that leaving the ground may not be a nice experience. Try and wipe this smile off your face, keep your head down, and get back to the coach in one piece. Luckily I managed to put on my poker face and get back to safety.

Of course, the rest of the season could never live up to this. The team finished second in the table – a full 18 points behind Manchester United – and they did reach the UEFA Cup final. But there was never a truly orgasmic occasion that the climax at Chelsea delivered. Hardly surprising really. Let’s face it, it’s not every day that you get to enjoy a goal and a celebration like that.