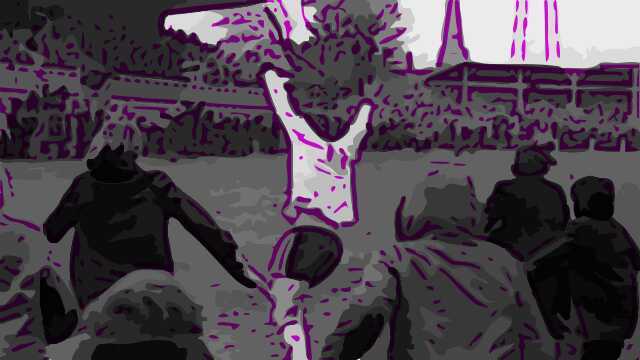 Ronnie Radford’s goal for Hereford United against Newcastle United in 1972 has gone down in folklore. Any TV programme covering the history of the FA Cup will include this goal. John Motson, who was commentating at the time, says it launched his career.

On Wednesday 2nd November Ronnie passed away at the age of 79.

5 February 1972 was the date. Hereford United were a non-league side at the time, Newcastle a Division One club. The two were meeting in the Third Round of the FA Cup. The tie had gone to a replay after the first meeting at St James’s Park ended 2-2.

This was not the only shock result in the cup that year. Non-league Blyth Spartans had held Reading to a draw and Carlisle United went to White Hart Lane and also came away earning a replay. To be fair to Carlisle, they were riding high in the Second Division on their way to reaching English football’s top table a couple of seasons later.

The tie had already become a bit of a saga. The first meeting was called off twice for rain and it finally went ahead on a Monday night. Everyone talks about the replay, but what is often forgotten is Hereford’s two goals in the first meeting were stunners too. Player-manager Colin Addison, who later went on to manage Derby County and Celta Vigo in Spain amongst others, and Brian Owen both scored theirs from outside the area.

The replay was called off three times. Each time Newcastle players had already made the trip down there. It finally got underway on the same day as many of the Fourth Round fixtures took place. The pitch wasn’t really up to it, in fact it was a quagmire, but the fixture schedule was getting crowded.

With the game looking like it could go into extra time, Malcolm MacDonald finally broke the deadlock and headed in Viv Busby’s cross. There were just seven minutes to go. Was it the winner? Motson’s commentary, saying a pretty firm “and there it is” suggested he thought it would be.

With just four minutes remaining, Radford picked up the ball in the centre-circle, not that you could make out the lines on the dreadful pitch. He played it forward to Owen on the edge of the area who was closely marked. He knocked it back for Radford to run onto.

MacDonald said later the ball hit a divot and bobbled up so when Radford struck it, it did indeed go like a rocket. He hit it first time from about 35 yards out and it flew into the top corner giving Newcastle keeper, Liam Faull, no chance.

The crowd immediately invaded the pitch. The players were swamped by young lads in parkas.

The game went into extra time and 13 minutes in the home side attacked, knocking the ball around confidently. The ball came out again to Radford about 25 yards out, but this time he played it to his right to Tyler. He hit a firm pass into the area where Ricky George, a second half substitute, took it, turned and fired a shot past Faull’s right hand into the corner of the net.

Over 14,000 had packed into Edgar Street with others even hanging in the surrounding trees to get a view. By the time George scored many of them were packed around the touchline, giving themselves a much shorter run-up for the second goal.

Hereford had done it. They’d pulled off one of the biggest shocks in FA Cup history.

The BBC Match of the Day cameras were at the ground but the commentator and his producer were two newbies. Motson was only 26 at the time and had only been in the job for a few months. Initially, the game was going to be shown right at the end of the programme that evening. But the result was such a shock it gained top billing.

“I was on trial at the BBC, as I’d only been there three months. I was concerned with my capacity to do the match – if I could identify the players, see over the crowd, all those kind of nervous things. I’ve thought many times since that no goal is shown on the BBC as often as Radford’s and it was 35 years ago. I often shudder when thinking about if I’d got the scorer wrong – you wouldn’t spot it, but when I say, ‘What a goal!’ there’s a pause between the ‘a’ and ‘goal’ so that I could say ‘shot”

In the same interview, Radford said;

“It was an unbelievable feeling when my goal went in. It could have finished in the car park, but as soon as it left my foot I knew it was going for the top corner and Willie McFaul [the Newcastle goalkeeper] had no chance. There’s a marvellous picture taken side-on – McFaul’s in midair and hasn’t yet realised that the ball is in the back of the net. What a time to score! Especially after going behind having played so well.

I’ve not seen Willie since. But I’d love to see him or any of the Newcastle players again. These kind of memories are what make football the great game. The day’s significance did not sink in until later – I didn’t realise how famous it would become.

“The first time I met Ronnie was when he came across the pitch that day to be interviewed. But I later got to know him very well at the many reunions that Hereford team staged, every year or two until that big one in February. He was a typical down-to-earth Yorkshireman, a very modest man who never craved or expected publicity. But that goal of his changed my life.”

Unfortunately for Radford, it didn’t have the same effect on his career. He was already on a part-time contract at Hereford.

Born in South Elmsall, West Yorkshire in July 1943, he began his career at Sheffield Wednesday and Leeds United without making a first team appearance for either club. He played in the same Leeds youth team as Norman Hunter, Gary Sprake and Terry Cooper. He followed this with spells at Cheltenham Town, Rugby Town and Newport County. He was voted Player of the Year at County in his first season. But eventually, the strain of travelling to and from Newport became too much. Wales, Leeds and Juventus legend, John Charles signed him for Hereford.

The Newcastle game made him famous. They came up against First Division opposition in the next round when they held West Ham United to a goalless draw at home. The Hammers won the replay, 3-1, and the dream was over.

They had been the first non-league side to put out a First Division side since 1949.

That season they finished runners-up in the Southern League and were elected to the Football League. Radford stayed at Hereford until the summer of 1974 when he moved to Worcester City to take over as a player-manager. After brief spells at Bath City and Forest Green Rovers his career was ended by an Achilles injury. With two young children to support, he continued his career as a carpenter and joiner.

When hearing news of his death, Hereford said;

“Ronnie is not just part of Hereford United folklore, he is part of football history.

We will always keep him close to our hearts at Edgar Street.”

The club statement went onto say;

“His mild manner and friendly and modest approach to life epitomised the man he was, and he was always delighted to visit Edgar Street, to meet up with past teammates and watch the present day team in action. We will celebrate him and his huge role in propelling Hereford United to the forefront of the nation’s attention with that goal and being part of that team.”

“Though against us, a goal forever written into FA Cup folklore. Rest in peace, Ronnie.”

Motson added his own words to the BBC on Wednesday;

“Most people thought Hereford were going to lose by one or two goals – and when Malcolm Macdonald scored, it looked that way.

“And then Ronnie changed everything. He changed his life, my life, the history of the FA Cup with a goal that came out of nowhere. In my lifetime, I’ve never seen a shot fly through the air and go into the net quite like it.

“Coming as it did for a non-league team against a first division side, as Newcastle were, it made huge headlines. Ronnie became a celebrity within a few seconds.

“It was the ultimate giant-killing, topped off by one of the great goals of FA Cup history.”