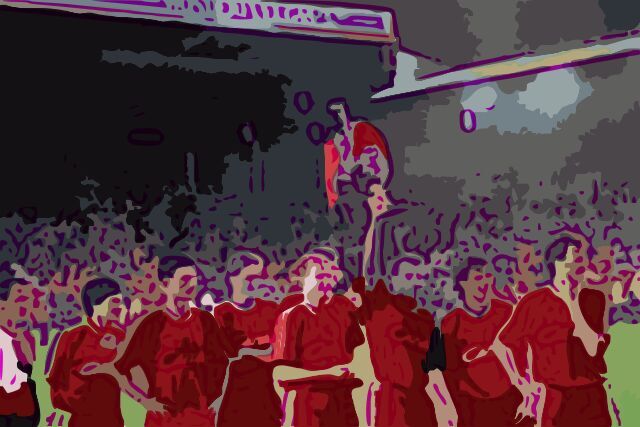 In the 2019/20 season, Liverpool won their first Premier League trophy since the inception of the new division in 1992/93.

They came close to breaking their hoodoo on several occasions, whether challenging Manchester United in 2008/09 under the management of Rafa Benitez, or in the 13/14 season, which saw the infamous ‘Gerrard slip’ that cost them the title that year.

Despite having such excellent players and managers over the years, it took the club 30 years, from 1990 to 2020, to win another first division title, while other clubs like Manchester United, Chelsea and Manchester City have popped up to claim glory on mutiple occaisons in their place.

This piece will focus on Liverpool’s 1989/90 season and how little anyone knew it would be their last state of first division success for 30 years.

An Unbeaten Start to the Season

After dramatically losing the title to Arsenal on the final day of previous season, Liverpool looked to make sure nothing like that would happen again in the next campaign.

Under the guidance of manager Kenny Dalglish, Liverpool did just that by going unbeaten during the first two months of the season, getting off to a winning start by beating Manchester City 3-1, thanks to goals from John Barnes, Peter Beardsley and Stephan Nicol.

They also started well against Aston Villa in their next game, with Barnes giving the Reds a 1-0 lead after 24 minutes. But the Villans pegged them back with a David Platt goal in the 64th minute; the Reds couldn’t find another goal, and the game ended in a 1-1 draw.

There would be more frustration for Dalglish’s men at home to Luton Town a few days later, drawing 0-0 despite having several good chances to score, ending the month of August with five points after three games played.

The Reds started September in some style, beating Derby County 3-0 at Pride Park with goals coming from Ian Rush, Barnes and Beardsley. But in their next game at home to Crystal Palace three days later, they would put on a show of dominance that would send a statement to the rest of the league.

Nicol got the ball rolling with a curling effort in the 7th minute, but that was only the beginning for Dalglish’s men that night. Stephan McMahon got Liverpool’s second eight minutes later, with a lobbed finish, with Rush getting a third just before halftime.

Palace fans were hoping Liverpool would take their foot off the gas for the second half, but Dalglish’s side only went up through the gears as they ramped up the scoring after the interval.

Gary Gillespie’s diving header made it 4-0 after 56 minutes. Beardsley then got in on the action five minutes later when he scored just after the hour mark, giving the Reds a 5-0 lead.

Substitute John Aldridge scored from the penalty spot in the 67th minute to make it 6-0 for Liverpool before Barnes got involved in the goal scoring, picking up the Red’s seventh on the night with just over 10 minutes left to play.

Palace had a penalty themselves and could’ve taken something out of the game, but the spot kick was blazed over the bar. Summing up the night for the Eagles.

Barnes was involved in the Red’s eighth goal, setting up Glenn Hysen’s effort from a corner before Nicol, who started the scoring, got Liverpool’s ninth and final goal of the evening as the reds put on an entertaining display at Anfield.

However, Dalglish’s men must’ve used up all of their goal scoring that night, as in their next game against Norwich City, they drew 0-0 as the Canaries managed to keep the Reds at bay.

But Liverpool was not to be denied in their next two games as they went away to Everton in the Merseyside derby and Wimbledon at Plough Lane. Running out 2-0 winners in both, Barnes and Rush swept aside the Toffies, while Beardsley and Ronnie Whelan scored in South London to secure back-to-back away victories for the Reds.

Unexpected losses and bouncing back with a bang

Liverpool lost their first game of the season in somewhat unexpected circumstances away to Southampton at The Dell. Paul Rideout gave the home side the lead after 24 minutes before Rod Wallace made it 2-0 just a few minutes before halftime.

Wallace got his second 10 minutes after the restart before Beardsley got a goal back for the Reds from the penalty spot. Matt Le Tissier completed the scoring seven minutes from time to give Southampton a 4-1 victory over Liverpool.

Liverpool managed to bounce back in their next game against Tottenham at Anfield, winning 1-0 thanks to Barnes’ 25th-minute winner. But the Reds would suffer back-to-back defeats in their next two matches.

The first was a home defeat to Coventry City courtesy of a Cyrille Regis strike within two minutes of the second half, and the next was a dramatic 3-2 loss to Queens Park Rangers at Loftus Road.

Paul Wright put the R’s 1-0 up from the spot after 27 minutes before Liverpool won a penalty five minutes later, with Barnes scoring the resulting spot-kick. But Wright put QPR back in front just four minutes later.

Just over ten minutes into the second half, QPR got their third when Mark Falco scored to make it 3-1 to the West London side. Barnes got his and Liverpool’s second a couple of minutes later, but despite colossal pressure for the rest of the game, QPR held on for the win.

Having three defeats in four games is the type of form that could derail a title race; however, for Dalglish’e mentality monsters, this would be the beginning of a fantastic run of games that would cement themselves firmly within the title picture.

From November 1989 to March 1990, Dalglish’s men would only lose one of their next sixteen league games, winning ten and drawing five in that timeframe.

It started with back-to-back wins against Millwall at the Den and Arsenal at home, both 2-1 victories as Barnes and Rush helped themselves to goals in London while McMahon and Barnes again scored to give Liverpool all three points against the Gunners.

The solitary defeat in that run came against Sheffield Wednesday at Hillsborough, with David Hirst and Dalian Atkinson getting the goals for the Owls in a 2-0 loss for the Reds.

After that, Liverpool would go 13 games unbeaten, starting with a 4-1 against Manchester City. Beardsley, McMahon, and a Rush brace doing the business against the Citizens.

An emphatic 5-2 victory against Chelsea at Stamford Bridge followed a 1-1 draw at home to Villa. Rush once again gets a brace as Beardsley McMahon, and Houghton all chipped in complete the goal-fest in West London.

Another draw followed suit after Liverpool oversaw a 0-0 result against Manchester United’s rivals before winning two consecutive games against Sheffield Wednesday and Charlton Athletic at Anfield 1-0 and 2-1, respectively.

Dalglish’s side started the new year somewhat stagnant, picking up consecutive 2-2 draws against Nottingham Forest and Luton Town as Barnes, Rush, and Beardsley continued their goal-scoring form into 1990.

However, the Reds picked up their momentum and won four of their next five league games. Beating the likes of Crytal Palace 2-0, Everton 2-1 in the Merseyside derby, Millwall 1-0, and arch-rivals Manchester United 2-1. Their only draw came against Norwich, where the Reds drew 0-0.

Their riveting unbeaten run finally ended against Tottenham, where they lost 1-0 due to a Pual Stuart effort seven minutes from time. However, despite the loss at White Hart Lane, their unbelievable run of form meant they stayed top of the table as Dalglish’s men headed for the business end of the season.

The business end and rounding off the season in style

After the defeat, Liverpool quickly got back to winning ways with a hard-fought 3-2 victory over Southampton at Anfield. After initially taking the lead through Barnes, the Saints got on levels terms through Rideout ten minutes before halftime.

Jimmy Case gave Southampton a 2-1 lead three minutes after the interval, and the Reds couldn’t get an equaliser until the 73rd minute when Russell Osman put the ball into his own net, making it 2-2.

Rush got the home side’s third eight minutes from time, completing the turnaround for Liverpool and again showing their grit and determination to win.

Dalglish’s men followed this up with back-to-back wins against Wimbledon and Charlton Athletic. Rush and Gillespie got the goals against the Dons, while a Ronny Rosenthal hattrick and a Barns strike swept aside Charlton at the Valley.

However, they could only draw their next two games against Nottingham Forest and Arsenal, with the Reds throwing away a 2-0 lead against the former to draw 2-2 and having to come back from 1-0 down against the Gunners to draw 1-1 at Highbury.

They responded to these unusual results with a dominant 4-1 victory over Chelsea. Rush Rosenthal and a Nicol brace doing the business before the massive day against Queens Park Rangers a week later.

Liverpool needed four points from their final three games to win the title and on this weekend’s round of fixtures, with Villa only having two games left in their season, the Reds could win the league if they beat QPR and Villa failed to win against Norwich City.

But it was Dalglish’s men who made a less than ideal start, going 1-0 down within the first 15 minutes to a Roy Wegerle goal. Some order was restored in the 40th minute when Rush got the Red’s equaliser, giving the Anfield faithful hope of a title victory.

To add to their hope, Villa were 1-0 down against Norwich, meaning all Liverpool needed was another goal and the league championship would be theirs.

QPR was not making it easy for Dalglish’s players as they looked for a winning goal. However, with just over an hour gone, the Reds were awarded a penalty and Barnes was the one who stepped up to bury it from 12-yards.

The Villans were still losing at Villa Park so all Liverpool had to do was hold onto their lead and they would be crowned champions. Despite the nerves towards the end of the game, holding on to a slender 2-1 scoreline, QPR couldn’t find another goal, and with Villa drawing 3-3 with Norwich, Liverpool held on to a 2-1 win and crowned themselves champions of the First Division.

Celebrations rang around Anfield as Liverpool started the new decade with success, but they wouldn’t lift the trophy until their next home game against Derby County.

In their final home game of the season, it wasn’t a classic by any means, but the Reds got the job done through a Gillespie goal just nine minutes from time. That didn’t matter much though as it was party time at Anfield, with the players, coaching staff, and fans all getting involved with the celebrations, ending the decade as it started, with success.

To cap off an amazing season, the Reds won their final game of the season with an emphatic 6-1 victory away to Coventry City, with Rush, a Barnes hattrick, and a Rosenthal brace rounding off a fantastic campaign for Dalglish’s side.

It was nothing short of sensational for Liverpool, but little did anyone know that this would be the last time the Reds would taste a league title triumph for 30 long years. Jürgen Klopp would finally end that drought and bring the title back to Merseyside in 2020, bringing wild celebrations not seen since the days of Kenny Dalglish in 1990.