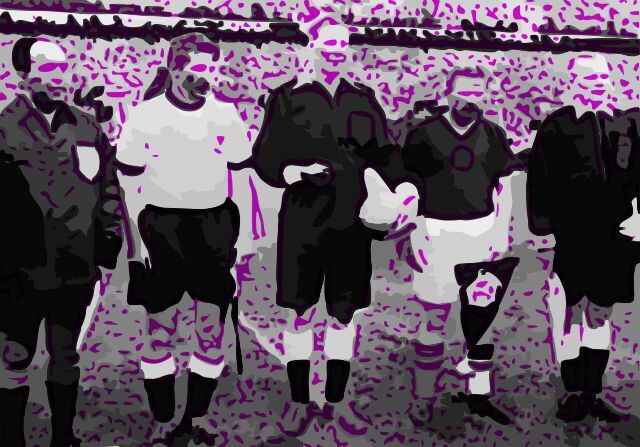 It’s often said the best referees are those you don’t notice. Yet for the three Englishmen who have refereed a World Cup Final, each one courted controversy.

Howard Webb’s handling of the 2010 bad-tempered match between Spain and Netherlands was criticised. In 1974 Jack Taylor awarded two penalty kicks in the first half an hour. There’s little debate over the first one, given against the host nation in the opening 80 seconds. But some say he gave the second to even things up. He strongly disputed that.

The first Englishman to officiate in a World Cup Final was William ‘Bill’ Ling in Berne, 1954. In a match which became known as ‘the Miracle of Berne’, Ling was embroiled in controversy for ruling out an equaliser late in the game.

The match was labelled a miracle after West Germany, a fragile, embarrassed nation making their first appearance in a World Cup since the War, overcame huge odds and beat the best team in the world at the time, Hungary.

Hungary were unbeaten for 32 matches going back over four years. In fact, over a six-year period they only lost one match, and it was this one.

Hungary raced into a two-goal lead in the opening ten minutes. But the West Germans came back to level things up before the game was 20 minutes old. The rain came down and Puskas was struggling with an ankle injury picked up in the group demolition of the West Germans two weeks earlier. The West Germans also had the advantage of footwear being more adaptable to the wet conditions.

With six minutes remaining Helmut Rahn gave West Germany a shock lead. Almost immediately the Hungarians came back into it. Puskas equalised with two minutes still to play and it looked like the game would go into extra time.

“It was never offside. Never!”

Wrote Ralph Finn, one of the few English journalists watching from the press box.

“The decision was a cruel blow”, he continued.

Ling sided with his fellow official. The Hungarians surrounded him, astonished at the decision made worse as he appeared to change his mind.

German commentator Herbert Zimmerman, who attained legendary status for his oratory after the West Germans took the lead, was in no doubt as to the validity of the goal.

He declared even before Puskas had taken his shot.

TV footage is typically grainy but it certainly looks like Puskas was onside when he first received the ball outside the area. There’s a German defender on the ‘D’ slightly ahead of him. Then as the action rolls on you can see another defender come into view. Unless he put in a sprint Usain Bolt would’ve been proud of, he was likely to be playing the Hungarian striker on too.

Zimmermann’s place in the commentators’ Hall of Fame came when describing, what turned out to be the winning goal;

“Bozsik, time and again Bozsik, the right half-back of the Hungarians, with the ball. He has lost the ball this time, to Schäfer… Schäfer has crossed, header… cleared. From the deep Rahn ought to shoot – Rahn shoots – GOAL!! GOAL!! GOAL!! GOAL!!

He fell silent for a full eight seconds before finally adding;

“Goal for Germany! … Germany lead 3-2. Call me crazy, call me mental, I believe also football laymen should have a heart!”

Then when Ling blew his whistle for the final time, Zimmermann was beside himself with delight;

“Over! Over! Over! … Over! The game is over! Germany are World Champions”

This was several years before the world discovered how good a Zimmermann could be with words.

The West Germans hung on to pull off a huge shock. For FIFA the World Cup was still in its infancy yet after the Second World War they were determined to make it as big as the Olympics. For the second tournament running, they had a shock winner, ensuring the competition filled many column inches around the world.

At the end of the game, it was reported Ling was struck by the Hungarian keeper, Gyula Grosics. The dream for the Hungarians was over. They would go down in history as one of the greatest sides never to have won the World Cup.

Ling, Griffiths and the other linesman, Vincenzo Orlandini from Italy, officiated a match which had huge ramifications for the fortunes of both nations afterwards. Fortunes which could not have been more contrasted.

Post-WWII West Germany was a downtrodden country with a population timid and lacking in self-esteem. National pride was not something to be spoken about, holding too many connotations with the past.

Rahn’s goal changed all that. The birth of German international football as we know it today can be traced back to this match.

For the Hungarian people, this was a national disaster. Thrown into the clutches of a communist regime after the War, Hungarian football was used to boost the reputation of the country. Grosics summed up the mood of the nation in the aftermath;

“The reaction in Hungary was terrible. Hundreds of thousands of people poured into the streets in the hours after the match. On the pretext of football, they demonstrated against the regime. In those demonstrations, I believe, lay the seeds of the 1956 uprising.”

Some in Hungary blamed the keeper for the third goal. He was accused of espionage and treason and was temporarily put under house arrest. He was even transferred from Honved to a provincial team against his will.

Hungary continued their dominance after the World Cup and went a further 18 matches unbeaten. But any hopes of putting right in Sweden ’58 what had gone wrong in Berne, were dashed when the 1956 revolution saw star players, Puskas and Kocsis leave the country. Manager Gusztáv Sebes was also cast aside and the Hungarian national team has never reached such heights again.

Born in Stapleford, Cambridgeshire, Ling quickly rose through the ranks as a referee. He was selected to officiate during the 1948 Olympic Games in London. At the time he was only on the supplementary list as a Football League official, yet after taking charge of a group and a Quarter-Final match, he was given the responsibility of refereeing the Final between Sweden and Yugoslavia. If anyone from Budapest had been paying attention, they’d have seen how controversy tended to settle on Ling like a cheap suit.

He denied Yugoslavia two penalty decisions in the second half which appeared to rattle them. This was compounded by his decision to give Sweden a penalty for an offence that “looked no worse than those committed by the Swedish centre-half”.

He had quite a CV at the end of his career. Along with an Olympic Games Gold medal match and the 1954 World Cup Final, Ling was also in charge of the 1951 FA Cup Final. Two goals from Jackie Milburn gave Newcastle United victory over a Blackpool side containing many of the players who would grace the epic 1953 edition. Stanley Matthews, Stan Mortensen and Bill Perry were all in the Blackpool team that day.

As an aside, the man who refereed the ‘Matthews Final’ was none other than Sandy Griffiths, the chap who ran the line for the World Cup Final 12 months later.

Of course, the Final in 1954 wasn’t the only game in which controversy was found during that World Cup. The infamous ‘Battle of Berne’ between Hungary and Brazil occurred at the Quarter-Finals stage. Who was one of the officials? Yes, you’ve guessed it. Our very own Mr Ling was running the line with Arthur Ellis as the referee.

Ling died in May 1984 at the age of 75. Just three days later, Toni Turek, the West German goalkeeper who conceded the ‘goal’ Ling ruled out, also passed away.