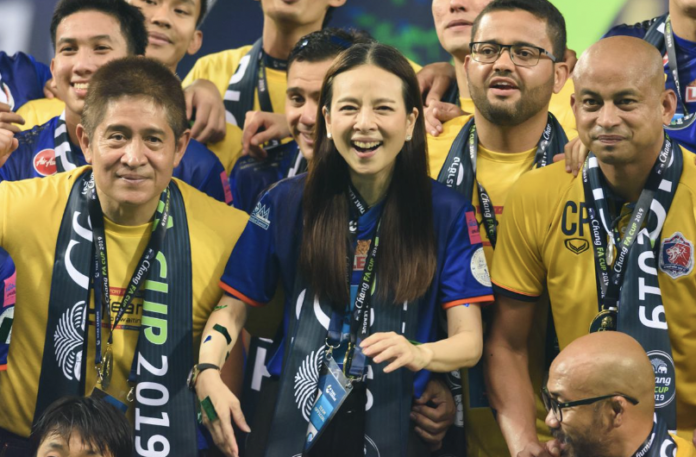 Just over a century has passed since American women received the right to vote, and ever since, they have fought for equality in all aspects of life. While some barriers have been lifted, others still stand in the way of progress. As Hillary Clinton said when she won the nomination for the American Presidency, “the sky’s the limit” for women.

Women are now demonstrating their extraordinary capabilities and leading sectors that have previously been dominated by men, such as sports. One such woman has cracked the glass ceiling and proved that women can compete on an equal basis with men in a male-dominated sport. The first manager of the Thai men’s national soccer team is Nualphan Lamsam, a.k.a. Madam Pang. The Football Association of Thailand (FAT) promoted the well-known businesswoman based on merit, taking into account her impressive career and substantial soccer expertise.

Nualphan Lamsam is one of the unsung heroes of Thai football and has expertly guided multiple teams to historic success.

Nualphan began her career in football management roughly 15 years ago, when she was named manager of the Thai women’s football team (Chaba Kaew). Her management abilities were initially tested when Vietnam humiliated the team in 2009. Contrary to expectations, she used the downturn to spur the team to greater performance.

The team soon grew under her direction and went on to win the South East Asia (SEA) Games in 2013. The excellent squad won the 27th SEA Games football gold medal in 2014, qualifying for the 2015 World Cup.

Chaba Kaew went on to play in the 2015 World Cup for the first time. The team’s performance at the subsequent World Cup in France demonstrated its greatness under Nualphan’s guidance.

Despite her departure from Chaba Kaew in 2019, the Thai women’s team and fans admired her dedication to Thai football and results-oriented leadership. Her time with the team established a winning streak worthy of imitation.

Nualphan rose to greater heights in football team administration thanks to her perfect record. She wished to lead another Thai team to success more than anything.

When the Football Association of Thailand (FAT) selected Nualphan to lead the War Elephants, the country’s men’s soccer team, in 2021, they provided her with the perfect opportunity. The appointment happened after the team’s heartbreaking 2022 World Cup exit. Nualphan, however, had seen it as a wonderful chance to contribute to the success of yet another team.

During the event, FAT president Somyot Poompunmuaung highlighted the organization’s satisfaction with her previous accomplishments and expressed their confidence in her talents.

Soon after, the War Elephants made her proud by winning the Suzuki Cup in January 2022. It was an early indication of her potential to reshape the squad, as well as a demonstration of a woman’s ability to execute when given the opportunity. Nualphan is currently attempting to fulfill her vow of restoring Thailand’s glory days of football.

The Struggle for Gender Equality

The appointment of Nualphan as the manager of Thailand’s men’s soccer team is a testament to the advancement of gender equality. It endorses the century-old struggle for equality in all aspects of life. False stereotypes about women’s value and potential must be eradicated in order to achieve gender equality in sports. Women are especially treated unfairly in the sports sector, with fewer possibilities, poorer earnings, and restricted access to facilities. On the other side, it is heartening to see how the sports industry has embraced this tremendous change. The group of female athletes who thrive, especially in soccer, now includes Nualphan Lamsam. Despite not being the sole female in soccer, which is a sport dominated by men, she is a key symbol of the rising opportunities for women in athletics.

Sarina Wiegman, the Dutch soccer manager, and a former player have almost the same track record of success. She is the driving force behind the Netherlands women’s team’s UEFA Women’s EURO 2017 victory. Her extraordinary ability to make the team excellent earned her the title of FIFA’s coach of the year twice.

Helen Nkwocha also made history as the first female coach of a top-ranked European men’s team. These phenomenal women’s ability to lead a men’s squad demonstrates women’s capabilities in athletics. Clearly, the teams they represent are in good hands due to their strong mentality and drive to conquer many obstacles in the sports industry.

The world was shocked when Nualphan Lamsam was named manager of Thailand’s men’s national soccer team. However, her prior successes demonstrate that she is a key asset in creating exceptional teams. Lamsam and other outstanding but unrecognized female athletes show that football clubs can count on women to achieve and maintain excellence.

Football Betting Promotions to Look Out For

The Rise and Fall of an Empire: The story of how...