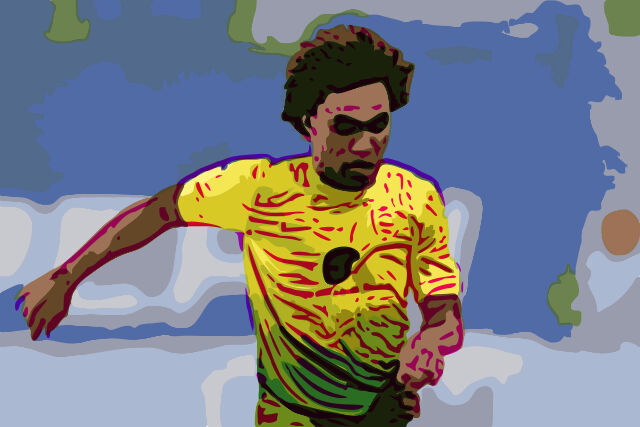 Normally when I sit down to write an article, I develop my ideas on social media, frantically scrolling through Twitter until something nostalgic sparks my interest. However, to try something different, I decided to let Football Manager dictate what the topic of this article will be – FM 2013 to be precise.

I have to confess, I am a bit of a Football Manager nerd. I have been playing FM since my school days, rushing home from History class to continue my ninth season of my journeyman save. Channelling my inner Roy Hodgson, I have managed all across the world, although the language barrier isn’t as noticeable when all the players are virtual.

Anyway, I loaded FM2013 up for the first time in several years and opened my last saved file. There I was, in the Fiorentina dugout in the year 2018, as reigning Serie A champion. As I looked at my squad, which mainly comprised of South American exports I’ve never actually heard of, one particular player stood out to me – Ivorian striker Lacina Traoré. Yes, the one that played for Everton….

The Ivorian still plays today, plying his trade for Portuguese second tier for Varzim S.C. Blighted by injuries, Traorè’s career never quite hit the heights that his virtual self did in my FM save. Although, throughout his career, he has amassed a total transfer fee of £30.5 million, half of that coming from the Russian side Anzhi Makhachkala.

It got me thinking, remember that time that Anzhi’s change of ownership made them the richest club in the world, as they threatened to rival Paris Saint-Germain and Manchester City as the next European powerhouse? Well, fast forward 11 years from their infamous takeover and the club are now completely extinct, after failing to receive a license for the Russian third division.

The higher you rise, the harder you fall – the famous cliché that Anzhi fans know all too well. From signing Champions League winner Samuel Eto’o, to being stripped of their professional status, this piece will document the rise and fall of Anzhi Makhachkala.

The history of Anzhi Makhachkala

Founded in 1991 by former Dinamo Makhachkala player Aleksandr Markarov, Anzhi have historically been somewhat of a yo-yo team in Russian football. They earned their first promotion to the Russian Premier League in 1999, owing much of their success to club legend Ibragim Gasanbekov. Since their inception in 1991, the Azerbaijani striker was the club’s top goal scorer in every single season leading up to their promotion to the top flight.

He is still to this day the club’s all-time leading goal scorer, positioned third in the all-time appearance list too. Unfortunately, the Russian Premier League never got the chance to witness his brilliance. On the 3rd of July 1999, the city of Makhachkala mourned the death of Gasanbekov, who was sadly involved in a fatal car accident, aged just 29.

Spurred by the tragic loss of their talisman, Anzhi defied expectations to finish fourth in their inaugural campaign. However, their fortunes progressively went downhill from then on, as it turns out second season syndrome is not just a saying applicable in England. The yellow-greens, as they were known in Russia, narrowly avoided relegation in their second Premier League outing, finishing just four points outside the drop zone. Unable to avoid the inevitable, the 2001/02 campaign saw them drop back down to the second division, after picking up just five wins in 30 games.

An underwhelming eight-year absence from the Russian Premier League ended in 2009, as Anzhi won the second division title. The small city of Makhachkala was home again to top-flight football. They went on to finish in a respectable 11th place in their first season back in the big time, which doesn’t sound like something to scream home about, but for a city with little footballing history, Premier League football was a massive deal.

Anzhi fans felt like they had already won the lottery by surviving relegation, however, their excitement was launched into overdrive when rumours of a takeover turned out to be true. On the 18th of January 2011, successful businessman and billionaire Suleyman Kerimov announced that he had taken ownership of the yellow-greens, sending shockwaves across Europe.

As a fan of the English Premier League, we have all seen the impact that rich Russians can have on football. Roman Abramovich’s takeover of Chelsea in 2003 started an era of unprecedented success for the blues, and Anzhi fans were hoping Kerimov would lead a similar revolution.

The takeover immediately placed the Dagestan-based club at the top of the European rich list, with Kerimov the 36th richest man in the world at the time of the takeover. The Russian’s comments after his takeover served as music to Anzhi fans’ ears. He promised a significant financial investment into the club, as well as talks of a new 40,00 capacity stadium that would comply with UEFA requirements.

Then in arguably the biggest statement of intent from Kerimov, World Cup winning legend Roberto Carlos was brought to the club from Corinthians. Don’t get me wrong, the Brazilian icon was approaching the tail end of his career at the age of 37, but the signing was a real head turner. A club previously unknown outside of Russia was soon thrust into the limelight by the signing of Carlos, with many wondering how a small city in Russia could attract such a massive name. The signing of the famous Brazilian left-back signalled the start of a spending spree, as Kerimov went big in the 2011 transfer window.

A number of high-profile names made the city of Makhachkala their new home. Highly rated Moroccan winger Mbark Boussoufa joined the club for £8 million from Anderlecht. Brazilian striker Diego Tardelli was signed from Atletico Mineiro on a four-year contract. In another bold statement, Russian international Yuri Zhirkov was brought back to his homeland, leaving Abramovich’s Chelsea to join the Anzhi revolution.

However, the biggest signal of intent came on August 23rd. Cameroonian striker Samuel Eto’o made the switch from Champions League-winning Inter, to unknown Russian minnows Anzhi. Flexing his ridiculous financial power, Kerimov made Eto’o the highest paid player in world football, with a reported £20.5 million annual salary. The Cameroonian, who obviously didn’t go for the money, immediately hit the ground running, scoring 13 times in just 22 games.

Armed with a team of superstars, it was now time for a change of leadership. Unfortunately for Gadzhi Gadzhiyev, his management wasn’t as epic as his name, and he was sacked in September with the club lingering in 7th place. In came experienced Dutchman Guus Hiddink, who was widely respected in Russia due to his four-year spell in charge of the national team.

Hiddink’s arrival was shortly followed by the £12 million transfer of Congolese defender Christopher Samba, who came in the shore up the defence. Not the most fashionable of signings, but the arrivals of Hiddink and Samba steadied the Anzhi ship, as they went on to finish the 2011/12 season in 5th place.

With an upcoming Europa League campaign on the horizon, and the early retirement of Roberto Carlos, Hiddink was keen to strengthen his team even more. Experienced French midfielder Lassana Diarra and 6ft8 Ivorian striker Lacina Traore joined the club ahead of their inaugural European campaign. Anzhi recorded a record number of shirt sales ahead of the 2012/13 season, as their global visibility continued to soar. In February 2013, the club made another big money signing, as Willian joined the club from Ukrainian side Shakhtar Donetsk for a club record of £35 million.

After pumping loads of money into new signings, Anzhi were only able to manage a third-place finish in the league, missing out on Champions League qualification altogether. Their Europa League campaign was equally as disappointing, as a 93rd-minute Papiss Cissé goal saw Anzhi crash out of the competition in the Round of 16. However, this was just the start of a turbulent few years for Anzhi fans.

Hiddink resigned after just two games of the 13/14 season, replaced by former Manchester United first-team coach René Meulensteen. Meulensteen lasted a whole 16 days in charge of the Russian side, before being replaced with former coach Gadzhi Gadzhiyev. Anzhi were quickly becoming a bit of a circus act.

No sooner after taking over the club, Kerimov had seemingly lost interest in the project. On the 7th of August 2013, the Russian billionaire made the drastic decision to sever Anzhi’s budget by two-thirds. Russian news reported that a deterioration in Kerimov’s health was the deciding factor in his sudden decision to pull the plug on Europe’s most intriguing project. Others reported that he had realised he had invested too much money without any return on investment and was therefore cashing out. Either way, it didn’t spell good news for Anzhi fans.

The cutback saw wholesale changes to the squad, as many of the big-name signings were moved on in a bid to recoup some of the profits. Yuri Zhirkov and Christopher Samba were shipped off to league rivals Dynamo Moscow. Lassana Diarra and Mbark Boussofa both joined Lokomotiv Moscow. Lacina Traoré made the switch to Monaco for a reported £18 million. The two big names left in the squad, Samuel Eto’o and Willian, were both sold to Chelsea in cut-price deals.

Willian had barely put his boots on in an Anzhi kit before being shown out the back door, only managing 11 appearances in the Russian Premier League. However, nothing compares to Russian golden boy Aleksandr Kokorin, who was signed and sold in the same transfer window, having not made a single appearance for the yellow-greens. Brilliant business by Dynamo Moscow, who sold the Russian for £18 million before buying him back just three weeks later for less money.

The mass slaughter of the Anzhi roster had a detrimental impact on their league fortunes. They finished the 2013/14 season rock bottom of the league, having amassed a record low 20 points. Their misery was compounded in 2016, as Kerimov announced the sale of the club to Osman Kadiyev, the former owner of the city’s other club, Dynamo Makhachkala.

Since Kerimov’s sale, Anzhi have continued to plummet even further into oblivion. Once destined for European success, the 2019/20 season saw them fail to obtain a license for the Russian second division. Given an ultimatum of declaring bankruptcy or playing in the third tier of Russian football, Kadiyev opted for the latter. They received a license to play in the third tier and fielded their under-20 players, with many of the senior players jumping ship.

A real fall from grace, but further damage was inflicted to an already suffering Anzhi fan base. On the 3rd of June 2022, the Russian Football Union confirmed that Anzhi had failed in their quest to obtain a license to play in the FNL 2 (Third tier of Russian Football). Their failure to receive a license meant that the club automatically lost its status as a professional football club.

Anzhi issued a statement apologising to fans and stated that they hope the club can “come back one day”. A real rollercoaster of a journey for the Dagestan-based side. To rub salt into the wounds, city rivals FC Dynamo Makhachkala secured promotion to the Russian second division just 72 hours before Anzhi’s announcement, a powershift in the city of Makhachkala. A sad ending to a project which offered so much promise, I for one hope that they are able to mount a comeback in the near future.