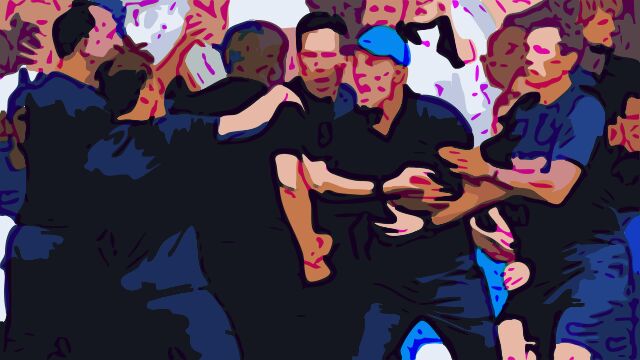 Well, that weekend had a bit to talk about didn’t it? The 2022/23 Premier League is only 180 minutes old and it has more talking points than Neighbours getting canned the other week.

Thomas Frank said after Brentford stuffed Manchester United 4-0 that he hoped they’d get a little bit of credit. But Thomas, where is the fun in that?

Erik ten Hag cancelled United’s day off on Sunday, presumably because they took it on Saturday. David de Gea often gets away with his inability with his feet because he’d very good at using his hands. His performance on Saturday does kinda explain why Dean Henderson had the massive hump.

United used the trip to West London to unveil their puke-green away kit – rather apt given their performance made their fans very, very sick.

And who’d have thought a 5ft 9 central defender would get targeted in the air at every available opportunity? Hipsters might well point to Javier Mascherano doing it for Pep at Barcelona or Italian metaphoric giants Franco Baresi and Fabio Cannavaro doing it for the their clubs and even Martinez doing it for Ajax last season. There’s a key difference however. They were in good teams. Martinez is not, so it does not matter how good he is on the ball if he’s being asked to defend for 90 minutes. Ben Mee (free), bundled both ball and Argentine shortman (£47m+) into the net for the third.

At one point, the Brentford fans were singing “you should have stayed at a big club” – the main question being whether it was being directed at Christian Eriksen or even Ten Hag. Still, it was good to see Eriksen still assisting for the Bees – laying on their second.

Ten Hag has broken pretty much every United record going in just two games – the only one left, surely, is fasted ever sacking? It’s not his fault, I hear you cry – but are you telling me he didn’t opt for Martinez and Eriksen – a talented midfielder who (shock, at United I know) there seems to be no plan for?

Thank goodness they didn’t sign Marko Arnautovic, right? There’s only so many bad decisions that can be made in a week.

And then what about Stamford Bridge? That was a bit passionate, wasn’t it? Chelsea and Tottenham showed plenty of fight on the pitch and even more on the sidelines and the biggest question that came out of it was not about either team’s third-place credentials – it was about who would win in an actual fight between Antonio Conte and Thomas Tuchel. My money is 100% on the Italian.

Spurs recruited a set-piece guru in the summer and he’s clearly still working through the attacking corners given how Tottenham conceded and scored.

Koulibaly has inherited JT’s famous number 26 shirt at Chelsea and has already done something I cannot recall Terry doing – volleying one in straight from a corner. Spurs passed their first real ‘bottle’ test of the season with Harry Kane heading home deep into injury time – leaving just enough airtime for Conte and Tuchel to start round two before the ref sent them both off.

Should Sergio Romero have been sent off for pulling Marc Cucurella’s hair? In fairness, there’s so much of it you cannot completely say it wasn’t an accident – until you realise it was Sergio Romero.

There was no such drama at the Emptyhad as Manchester City scored four against Bournemouth as expected. What wasn’t expected was that Erling Haaland didn’t get any. Obviously, they’re going to win the league again this season (and fail hilariously in the latter stages of Europe probably).

West Ham fans decided to spend their day throwing money at Jesse Lingard as Forest beat the Hammers 1-0. Maybe J-Lingz could put it in the transfer kitty the rate Steve Cooper is burning through the budget. It was Forest’s first Premier League in 20-odd years, you might have heard.

West Ham were slightly unfortunate and also masters of their own downfall – they hit the bar twice and made Dean Henderson believe he’s even greater after Declan Rice missed from the spot.

Arsenal looked very, very good in the sunshine. Gabby Jesus scored two and set one up before being hooked. Even Granit Xhaka scored and played well – shall we revisit this when it all gets a bit more cold and wet? As for Leicester, you have to worry for them a bit given that they aren’t going to sign anyone and are unlikely to resist the various bids for Wes Fofana and James Maddison much longer. The only bright spot for Brendan Rodgers really was Youri Tielemens playing so badly that the Gunners cannot bid for him again now.

The first ever managerial clash between Stevie G and Lamps brought a variation of the oft-asked question – who is better? My favourite answer to this question over the weekend was “Paul Scholes”.

On the pitch, Villa beat Everton 2-1 because Everton are really, really bad still and Villa are merely not that good.

The battle of the next England manager’s shortlist of two ended 0-0. Eddie Howe and Graham Potter’s sides put on an entertaining display but, ultimately, showed why both would love another striker in the ranks.

As we know, a week is a very long time in football – just ask Big Mitro. Seven days ago he was being lauded as the perfect proper number nine. On Saturday, he missed a late penalty costing his side a valuable win away at Wolves. Thems the breaks.

With 20 minutes to go, Southampton fans were questioning their faith in Ralph Hassenhuttl at St Mary’s. Leeds led 2-0 and the game looked done – until the Alpine Klopp rolled the old tactical gamble dice and magicked up two goals to steal a point.

I’ll be back next week – where United will definitely NOT get mocked (because they play Liverpool on Monday night which conveniently misses the deadline….)