Another week, another new low for the world-famous Manchester United FC. And no, it’s not the Pogmentary where Paul Pogba called the club’s £300k a week offer as “nothing”.

Only a couple of weeks after they quietly shelved the Ralf Rangnick consultancy role, club CEO Richard Arnold took to meeting fans in a pub to answer questions and allay frustrations at how utterly comical the club has been over the last few years.

That’s right – United have found a new way to be considered a pub side. 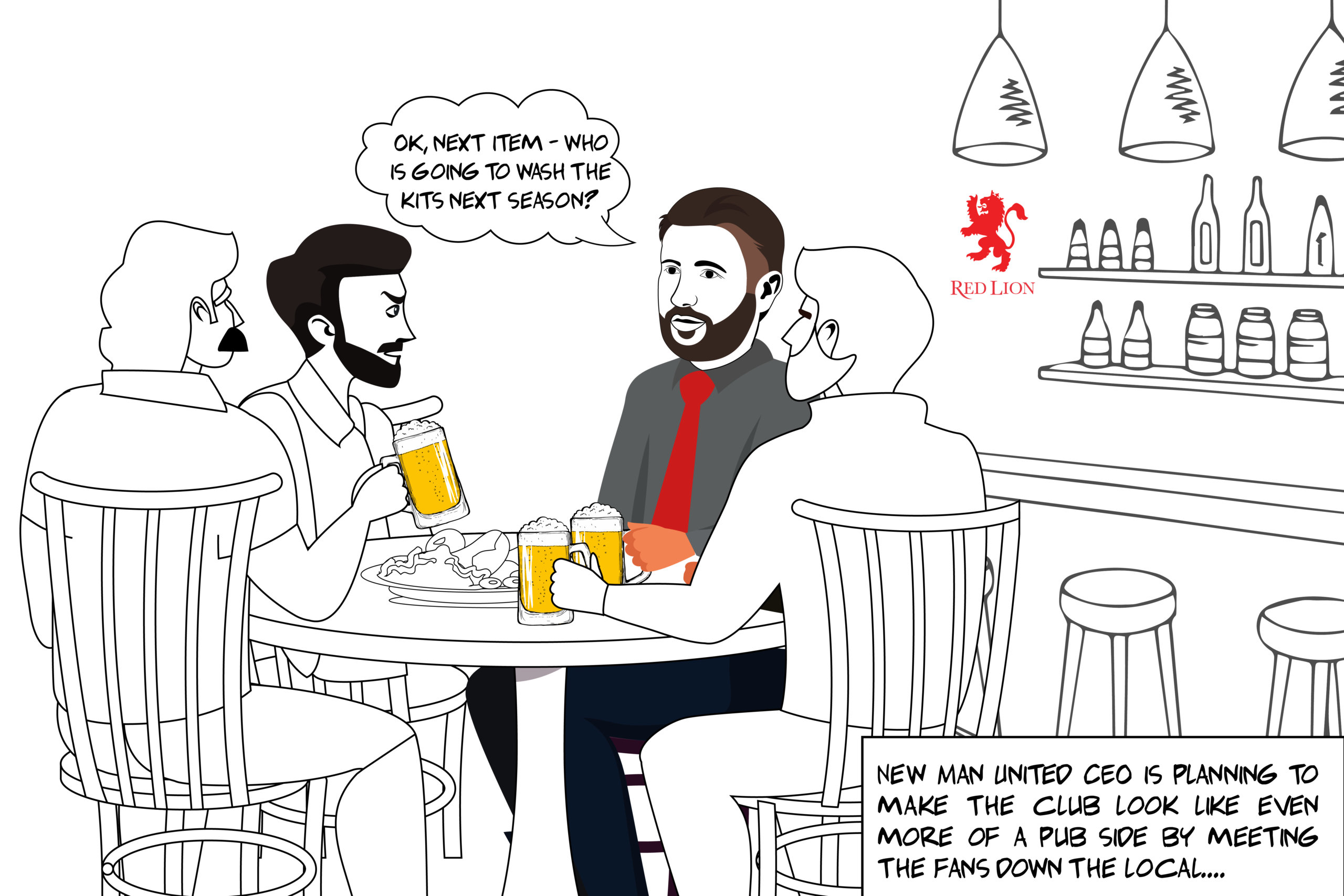 Speaking of pub sides, England lost 4-0 at home to Hungary in the infernal Nations League. And yes, I am fully aware that I was all for the Nations League when England were beating Spain away in the first go at the “these are better than friendlies, OK?” tournament.

Gareth Southgate took the blame, accusing himself of not having the balance right – asking the team to attack a bit more and leaving the backline exposed. England fans also blamed Southgate and the media are slowly moving towards a ‘Southgate out’ campaign.

Obviously, it’s not a good look. This Hungarian side are not the Mighty Magyars. But the Nations League is meaningless. Everything that happens in them gives Southgate some more information for what is actually important – the World Cup at the end of the year. Let’s judge it all after that, shall we?

If a guy who has taken us to a World Cup semi-final and a Euros Final cannot get a bit of space to get it right ahead of the next tournament, who does get that space? And, equally – who would take over anyway? Now maybe the players can have a little bit of a break before they are slammed straight back into action before the Qatar tournament kicks off in November.

Straight into the transfer chat this week now that matches seem to have finally stopped for a couple of weeks.

Liverpool have waved goodbye to Sadio Mane who is off to Bayern Munich after they upped their bid to what King Klopp deemed acceptable. Mane’s replacement is already in the house with the Nunez signing and Liverpool also won the race to get Aberdeen’s right-back Calvin Ramsey. A note to Scotland – you might want to start producing more than really good full-backs, folks.

Tottenham are quietly going about some good business which feels a bit different to January’s last-minute trolley dash. Brighton’s self-proclaimed best midfielder in the Premier League, Yves Bissouma, has been snapped up for an at first-glace bargain price of £25m. There’s also talk of Clever Conte pushing for the signing of Lautaro Martinez from Inter. If they pull that off, Spurs win the transfer window for me.

Arsenal have decided that the best way to try and win the Premier League is to sign players with the same names as those that won it in the past. As a result, Porto midfielder Fabio Vieira has been signed for £34m. But like all Arsenal plans, they are abandoning it early as they also signed Brazilian wonderkid Marquinhos. They are being linked to Ajax defender Lisandro Martinez, Leeds’ flying machine Raphinha and Leicester’s Youri Tielemens who will actually leave one day. Oh, and they are still hoping Gabby Jesus fancies turning out in red next season. 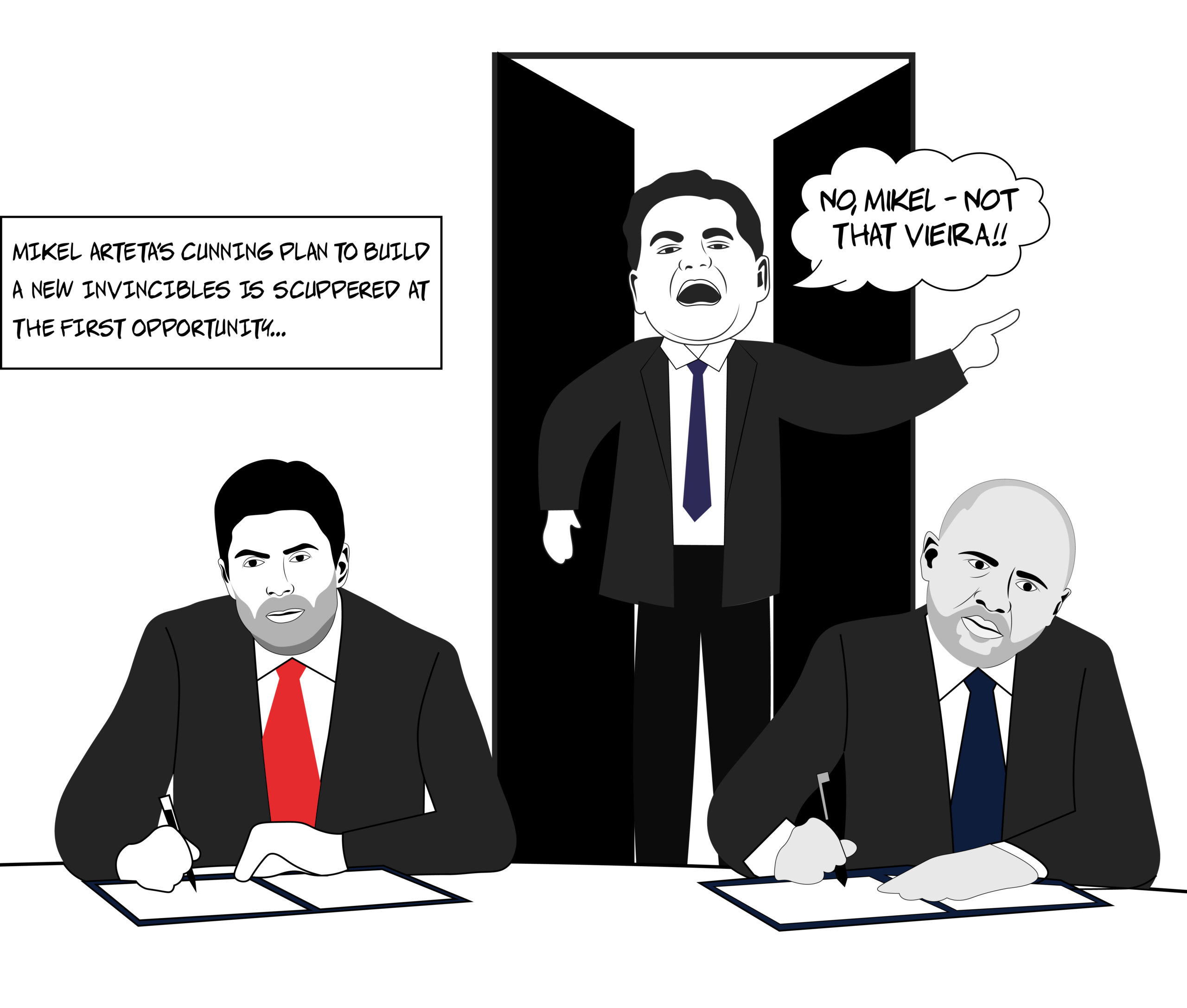 Tommy T would still like Barca’s Ousmane Dembele but only as a squad option out wide – because, you know, he doesn’t have enough of them already. Dembele is now less keen on a move to London.

Chelsea are so keen to move Romelu Lukaku out that they’ll even swap him for a central defender – Milan Skiriniar of Inter. He’s good, but it would still represent a huge loss for the Blues.

United, having learned how quickly they can do a deal with Dortmund with this stance, are waiting for Barcelona to drop Frenkie’s transfer fee. Rather just going out and getting Erik Ten Hag’s number one target, a player that he actually has a plan for, the club’s transfer brains trust is going to wait as long as possible for the price to come down. Fans already keen on buying a shirt with De Jong on the back might want to wait until next summer based on previous results of this strategy.

Jose Mourinho will be hoping that Ronaldo was a big Nemanja Matic fan. He’d like to take CR7 to Rome and apparently he’s keen – but that’s more to do with just wanting out of United than the thought of latching on to Matic’s one forward pass a season.

Phil Jones might end up at Leeds, one way to become even less popular with Man United fans. 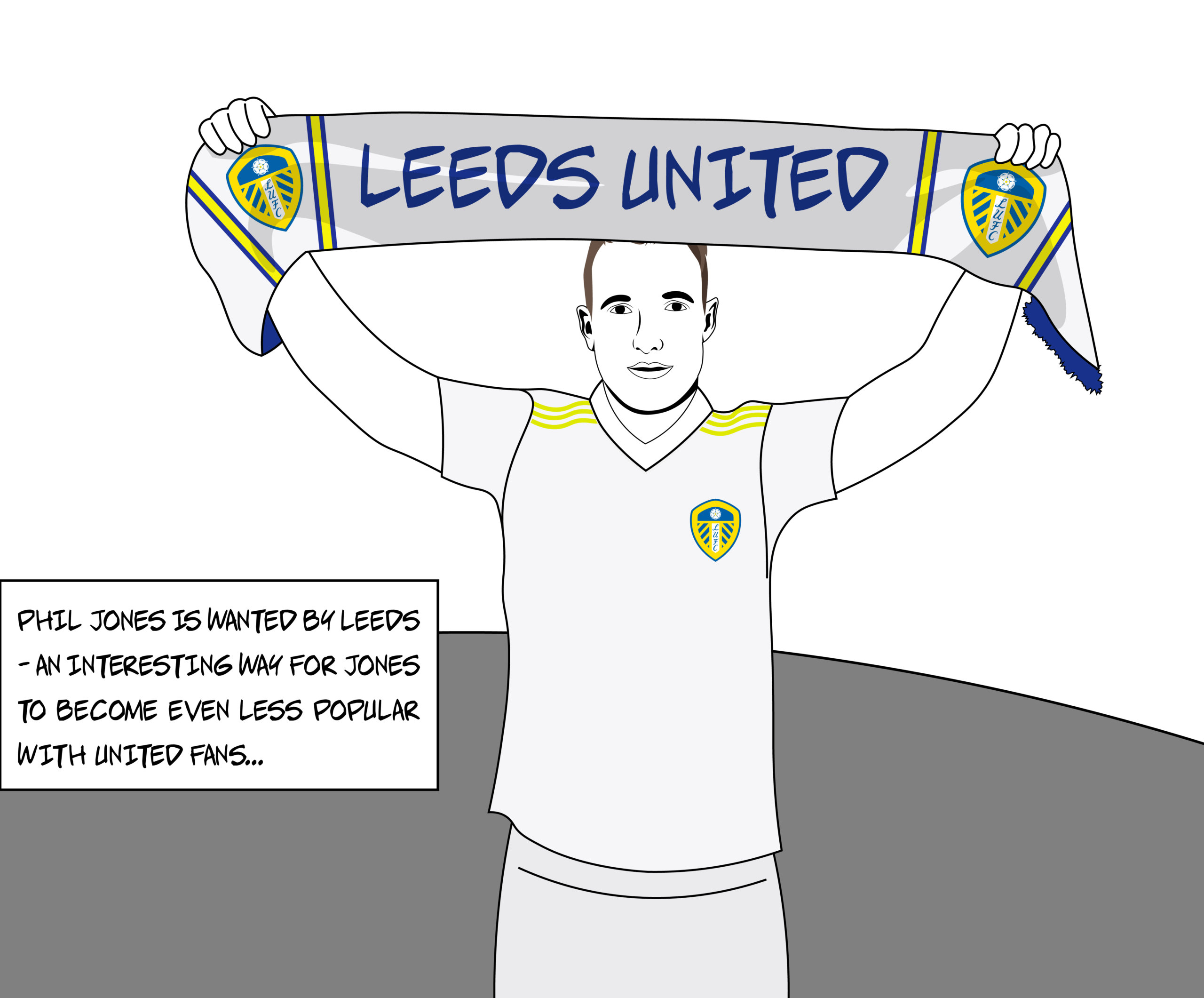 Leeds will be doing as much trying not to sell most of their best players this summer but have also brought one in just in case. Marc Roca has been lured from Bayern Munich.

David Moyes was one of the few managers to get a tune out of Adnan Januzaj and he’s now available from Real Sociedad. I am sure you can work out he is now being linked to the Hammers. West Ham have also realised Vlasic isn’t up to Premier League levels so he’s being bombed out on loan.

Everton have realised they signed the wrong Ukrainian left-back in January so now want Oleksandr Zinchenko from Man City. City want Marc Cucurella from Brighton as the replacement and he’ll cost about £35m which will mean Graham Potter has a bit of a rebuild on his hands.

Pep’s also keeping an eye on Wolves’ Rayan Ait-Nouri who is French. I genuinely assumed he was Portuguese and not just for the bants. Kalvin Phillips is still City’s preferred next signing, however.

There’s going to be a summer Baleometer again – this time, it is pointing high to Cardiff but Newcastle, Villa and Spurs are casting respectful glances in his direction. Gareth isn’t that bothered apparently. It’s only going to be for three months, after all. 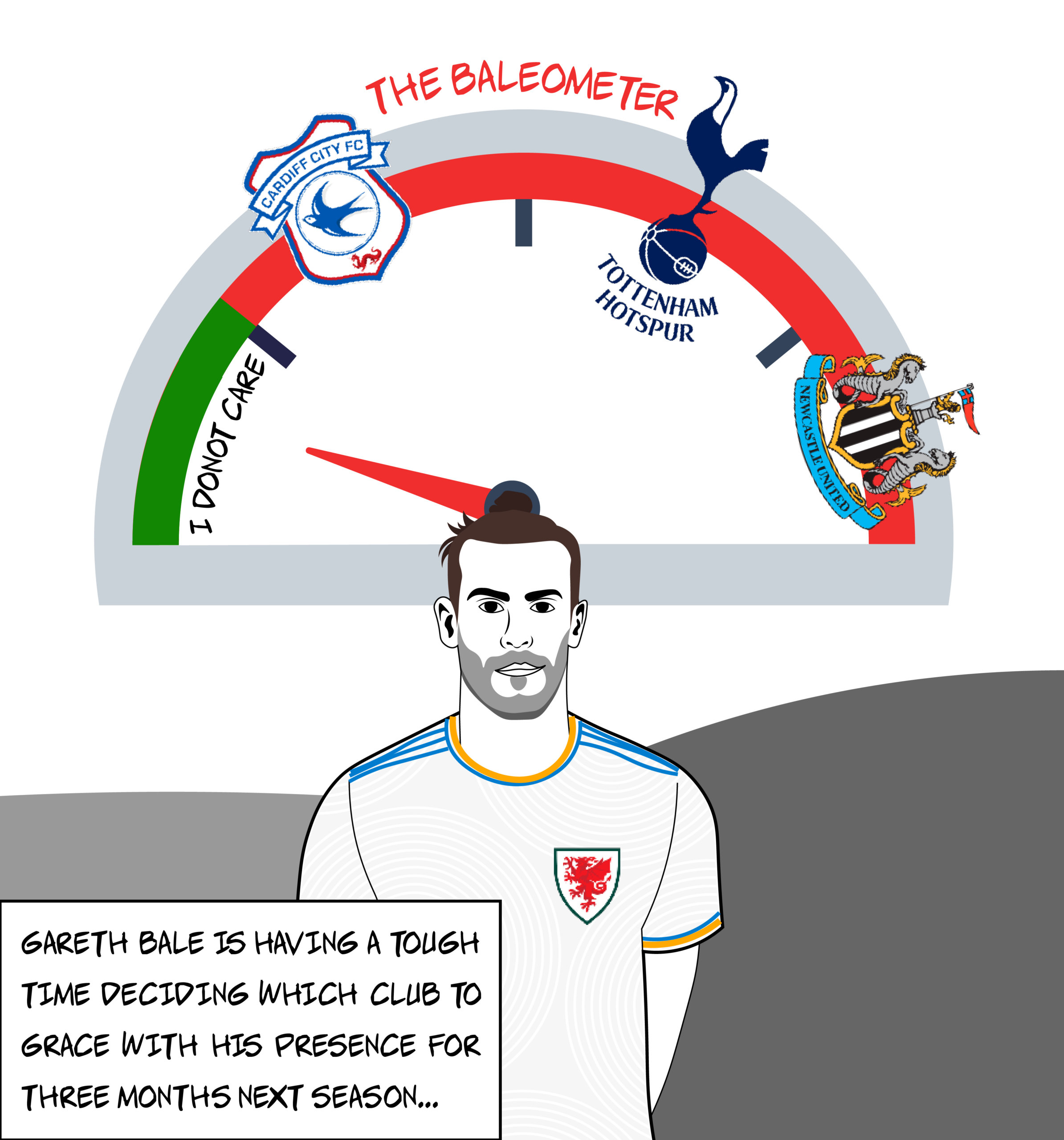 Newly promoted Nottingham Forest have £100m to spend and want Dean Henderson on loan, Liverpool defender Nico Williams on loan and Mainz defender Moussa Niakhate, plus Union Berlin forward Taiywo Awoniyi (ex-Liverpool, apparently). He netted 15 goals in Bundesliga last season and could be a great shout of a signing. Naturally, that endorsement smells of no goals at all and a January loan back to Germany.

Southampton have snapped up ex-Pompey loan keeper Gavin Bazunu from City and let their rivals know all about it. Is it cool to mock your local rivals when they are two divisions below you? The Saints also look like getting Chris Richards from Bayern Munich, who must be being fed the same lines as Marc Roca.

Another new feature I am trialling is Grealish-watch in Las Vegas. Tuesday night, couldn’t locate him at all. Saturday night? Falling out of a Las Vegas casino with a mystery brunette on his arm. Admittedly, this is probably not what the club GPS was intended for.