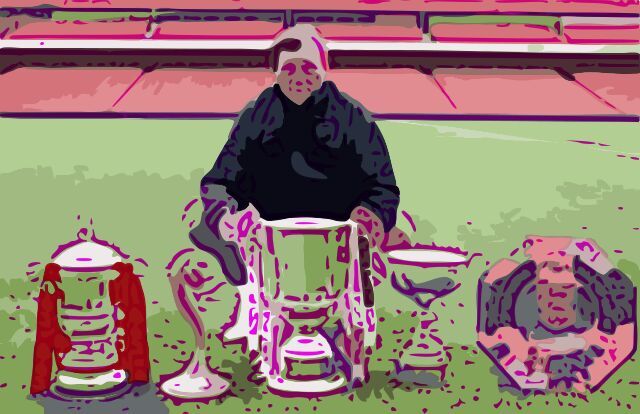 The term legend is thrown about all too often by football fans, usually attributed to players and managers that aren’t really deserving of the label. All it seems to take these days for somebody to be considered a ‘club legend’ is a few goals or a few wins consecutively. The modern fan doesn’t seem to factor in longevity.

When you think of Arsenal legends, I’m guessing the usual suspect’s spring to mind – Arsène Wenger, Tony Adams, Thierry Henry, Ian Wright, Dennis Bergkamp. One man that I guarantee absolutely none of you thought of but is without question an Arsenal legend, is a man by the name of Vic Akers. Some of you reading this article are probably wondering who this actually is. Others may know him as Arsenal’s kit man, but Vic Akers was so much more than that. Akers was ‘Mr Arsenal’, devoting 32 years of his life to the club and excelling in a variety of roles, including becoming a trailblazer in women’s football. Many will be surprised to hear that he is statistically Arsenal’s most successful manager in history.

His story is a fascinating one, and one that deserves to be told. In this piece, I will take a look back at how Arsenal’s kit man built a dynasty at Arsenal women that could rival the success of Manchester United in the 90s.

Similarly to Arsène Wenger, Akers playing career failed to reach the same heights as his managerial reign. Growing up in Islington, London, he began his career in the youth set-up at Fulham but never quite made the grade. He was released before signing a professional contract, subsequently signing for non-league side Tonbridge Angels in 1965.

After six years of bouncing around in non-league football, the English left-back was signed by Cambridge United for £5000. He was an ever-present in the 1973 Cambridge team that was promoted to the Third Division. Two years and 129 league appearances later and Akers was on the move again, this time signing for Watford, who were in the fourth tier of English football at the time.

His most successful period throughout his playing career was at Slough Town, where in 1981 he won the domestic treble – Isthmian League Premier Division, Isthmian League Cup, and the Berks and Bucks Senior Cup.

Akers saw out the last two years of his playing days at Carshalton Athletic, before retiring in 1986. A solid but not spectacular 21-year playing career in and around the lower echelons of the football league pyramid. His more memorable moments came next, in a non-playing capacity.

Fresh out of retirement on the playing side, Akers was straight into a job within the football industry. A family full of diehard Arsenal fans, including himself, he jumped at the chance to join the club in any working capacity. His initial role was working on community projects on behalf of the club.

But, after a chat with one of his female colleagues who was playing for Aylesbury women, he had his lightbulb moment. With the future of Aylesbury uncertain due to financial troubles, he proposed the idea of a takeover to the Arsenal hierarchy. His request was granted and in 1987, Arsenal Ladies were founded. As founder of the team, Akers was installed as the team’s head coach and manager. Although it is worth noting that in the 80s, women’s football wasn’t what it is today. Akers was juggling the role of Arsenal Ladies manager and his community role simultaneously.

It is important to highlight the landscape of women’s football back then. The FA actually banned women’s football for the best part of 50 years in the 1900s, declaring it “quite unsuitable for females”. The ban, which was ironically legislated by a full FA board of men, was lifted in 1971, allowing women’s participation in the sport.

Whilst in today’s game, the WSL is a fully professional league, this wasn’t the case in 1987. There was minimal interest in the sport, little to no media coverage, and a non-existent budget. The club was run by a team of volunteers, players were forced to work full-time jobs alongside their playing duties, and there were no budgets or revenue streams available from the sport. In a bid to create as close to a professional environment as possible, Akers would source internal roles within the Arsenal set-up for his players to take on alongside their playing role, allowing them to earn a wage whilst playing.

By the early 90s, Akers’ efforts to build the team up were finally starting to reap the rewards. Beginning from scrap three years prior, Arsenal ladies looked like a team that could go on and achieve big things in women’s football, earning plaudits from all over the country.

Akers raised a few eyebrows when he took on the role of kit man in Arsenal’s first team at the beginning of the 96-97 season. Many thought that this would spell the end of his reign as ladies’ manager, but this was just another project for him to get involved in. He declared his commitment to Arsenal ladies and confirmed his intentions to create a dynasty at the club.

The floodgates were fully opened, with the taste of success still fresh in the memory. His Arsenal team went on to amass 13 trophies through the course of the 90s.

With a view to the future in his mind, Akers took it upon himself to scout the next generation of homegrown talent. At this point, staff were still hired on a voluntary basis, and there was still no budget for a proper scouting team. Akers was trusting the good old eye test.

First up was Alex Scott. Scouted at just nine years old, Scott was signed up in 1992 and spent six years plying her trade in the Arsenal academy. She was initially a right winger, but Akers saw potential in her as a right-back. Playing as a left-back for the best part of 20 years, he knew what he was looking for in the full-back position. Scott would go on to become one of England’s all-time greats, making over 140 appearances for the Lionesses.

Kelly Smith is exhibit B of Akers’ great scouting ability. Brought to the club as a teenager in the 96/97 season, Smith played only a handful of games in that season before deciding to pursue an education in the United States. Akers had maintained a good relationship with Smith throughout her time in the US, and she was resigned by the Arsenal ladies’ boss in 2004. Smith went on to score 73 goals in just 66 games in a four-year spell. Another player who went on to make over 100 appearances for England.

Emma Byrne, an unknown (at the time) 21-year-old Irish goalkeeper was signed in 2000 from Danish club Fortuna Hjørring. Yet another player signed by Akers went on to make over 100 international appearances. His eye for talent was clear. Byrne was an unknown identity in English football at the time, but her impact was immediate.

With these signings, Akers had the foundations built to dominate English football. And that is exactly what his Arsenal team did, with the results instant.

Earlier I mentioned the great Manchester United team of the 90s that won four Premier League titles, four FA Cups, five Community Shield titles, and of course the UEFA Champions League. Sir Alex Ferguson had successfully built a dynasty at Old Trafford, with the class of 92 playing a significant role in the Red Devil’s success.

If Manchester United dominated the nineties, then Arsenal ladies dominated the noughties under Akers leadership. The gunners were unrivalled throughout the 2000s, completely relentless in their bid to conquer women’s football.

Between 2000 and 2010, the gunners won an extraordinary nine out of a possible ten FA Women’s Premier League titles – falling just short in 2003, an anomaly in an otherwise impeccable decade. Add to this the five FA cup victories and four FA Premier League cup triumphs, and it was clear that Akers perfectionist personality had rubbed off on his players.

We have all heard of the Arsenal men’s invincible season in 2003-2004, as an Arsenal fan myself, I make sure to remind people of this at every opportunity. But what many people don’t know is Arsenal ladies have also gone a whole season completely invincible. Akers side went the whole of the 2006-2007 season without losing a game, winning the quadruple in the process.

With the Champions League triumph, Akers had his hands on the only trophy missing from his collection. Akers, a kit man, had guided a team of part-time footballers with minimal funding to the illustrious European title. The WSL now is a fully professional league, backed with much better facilities and much better visibility in the media, yet still to this day no English team has been able to replicate the European success. Akers team, full of British players, defeated Swedish side Umeå 1-0 in the final. You may be wondering who got the winner. Well, that would be right back Scott, the player that had been scouted at just nine years old by Akers himself. A visionary leader, with the tactical nous to back it up.

Akers stepped down at the end of the 2009 season, having just guided the gunners to a domestic double. A real trailblazer in the fight for gender equality. The landscape of women’s football in England could have been very different if not for Akers. Two years after his resignation and the WSL was formed, a decision that he was a big advocate of. In 2018, Akers retired as the kit man, ending his 32-year stay at Arsenal football club.

A man that does not get the recognition he deserves from the wider football audience. Nevertheless, Akers left a lasting legacy and paved the way for future generations of female footballers to dream big in the football industry, something that society had previously taught them wasn’t possible.