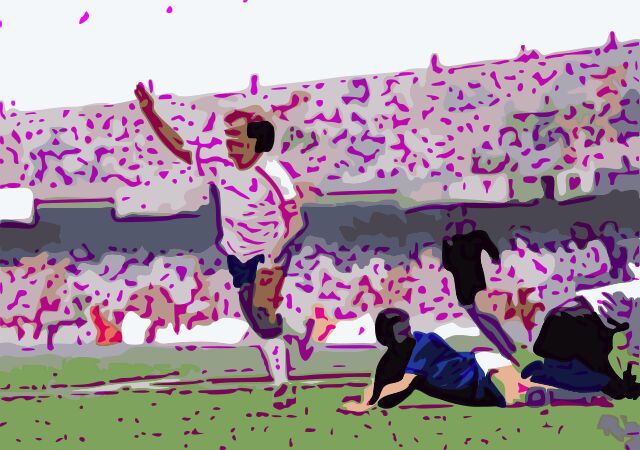 The second round continues!

Two days of the knockout stage had been every bit the success many hoped it would be. We now knew four of the Quarter-Finalists, Mexico, Belgium, Brazil and Argentina. Over the next two days, we would find out who they would meet.

Italy and France were up first with a meeting with Brazil the reward for the winners. This would be followed by Morocco v West Germany, and the winners of that tie would take on the hosts.

When Italy won the World Cup in Spain they beat the reigning European Champions, West Germany. Their next knockout match at a World Cup was also against the reigning European Champions, France. They’d already come up against the team whose World Cup crown they took in Madrid, Argentina. Yet this wasn’t the vintage side of four years before. They hadn’t qualified for the Euros the French won, and wholesale changes had made them competitive rather than favourites. Enzo Bearzot made two changes from the side which beat South Korea. In came Giuseppe Baresi and Giuseppe Bergomi, to replace Fabio Collvati and Antonio Di Gennaro dropped to the bench.

France were also yet to match the verve and panache of their team two years before. Then they were able to bask in the glory of Platini’s goals. He had yet to find the net during this tournament and it was hurting them. This was obviously on Henri Michel’s mind too as he swapped Papin for Rocheteau. Both these sides finished second in their groups. They could consider themselves lucky not to have met a group winner, but neither side considered this to be an easy game.

The last meeting between the two sides came three months before Spain ’82. The French won. It was their first win over Italy for 69 years.

A tight affair to begin with as the battle was in midfield. France had their treasured quartet of Platini, Giresse, Tigana and Fernandez. Bearzot brought in Baresi to bring some steel there, something they’d been lacking in the group games.

15 minutes in and the French put together a typically incisive move right through the heart of the Italian team and it was suitably finished off by Platini. It took two passes from Fernandez and Rocheteau to put Platini in on goal. He took one touch then lifted it over Galli and France were in front. 1-0.

Italy should’ve equalised when a corner from the right was headed on by Cabrini and Altobelli’s shot hit Di Napoli. It was cleared by the French defence. If Di Napoli had got a better touch on it, it may have gone past the two men on the line.

Luis Fernandez had a long-range shot from the left which just went wide. Platini also went close from a free-kick which forced Galli to make a good save. Fernandez was clearly on a mission to score from well outside the box as he had another go almost from the centre circle. This one rattled the crossbar so hard it almost bounced all the way back out to him.

Italy struggled to break the French down and the two sides went in at the break still separated by Platini’s goal.

Early in the second half, the French captain had a great chance to double their lead. Giresse brought the ball towards the edge of the area, before laying it off to his left to Platini. The European Footballer of the Year took it into the area. He was lucky that his shot bounced off Scirea and back to him, but as he continued on he skewed his second shot just wide. There were probably better options around him but Platini seemed in the mood to do it all himself.

Eventually, the second goal came. Italy really weren’t getting any joy with the French defence and after one attack Platini played it forward to Rocheteau, who then laid it off to Tigana. The graceful midfielder was away, gliding past Scirea’s challenge and into the penalty area. He feigned to shoot but played it square to Rocheteau. The big curly-haired striker couldn’t get his shot in but up in support to his right was Stopyra. He gratefully received the pass and fired it past Galli. 2-0.

The second half was barely 10 minutes old yet you felt the game was all but done. The rest of the half was still dominated by France with Italy looking a poor, sulky team. Substitute Ferreri had come on for Platini and almost made it three. His shot went through Galli’s hands and grazed the post on the way out for a corner.

The French were pretty comfortable with their victory. They probably expected more fight from the Italians, who bowed out, or perhaps they limped out. France’s reward for beating the World Champions was a tie against the team everyone thought should’ve won Spain ’82. Brazil.

Morocco became the first African side to make it to the second phase of a World Cup when they tore apart Portugal and won the group also containing England. That win followed draws against Poland and England, and they were expected to provide stiff opposition.

They made just one change from the team that was so exciting against Portugal. Mustafa El Biyaz, who’d played in all the group matches was injured. In came Lahcen Oudani, who made a couple of appearances from the bench.

West Germany had come through the group of death, but they had been less than convincing. A goal down for much of the game against Uruguay, and well beaten by Denmark, their only win was against Scotland. They had conceded first in every game so far. Finally, they were able to select Karl-Heinz Rummenigge from the start. They made three changes, Rummenigge, Magath and Briegel. Brehme, Herget and Rolff sat out the game.

The five games thus far had all been exciting, competitive matches. The USSR/Belgium game was a classic. Brazil and Argentina had been impressive and so had the French earlier in the day. With the Mexicans also progressing, much was anticipated about this match. The ultimate giant-killing lay before Morocco if they could win it.

The game was largely a dull affair. Morocco were certainly not overawed but many of their shots came from outside the German box and Schumacher was rarely troubled.

The best chance of the first half fell to Rummenigge. From a throw-in on the left, Allofs turned his man then fizzed a shot across the six-yard area. Rummenigge was at the far post and met it firmly but Zaki pulled off an astonishing save to keep it out. On closer inspection, Rummenigge actually hit it at Zaki, who was stood in the middle of the goal. It was still a good save but it was a bad miss from West Germany’s talisman.

In the second half, the West German captain almost scored a spectacular goal. Matthäus took a free-kick wide on the right. It came out to Allofs on the left of the area. His cross back into the goalmouth found Rummenigge on the six-yard line. With his back to goal, he attempted an acrobatic overhead kick, that went just over.

Zaki was the busier of the keepers as the Germans pressed. He saved from Littbarski, who’d come on for Völler. Then he had a long-range effort from Magath to deal with, which he did quite comfortably. Matthäus should’ve done better with a chance he had, one on one with the keeper but he couldn’t lift it over him. The game remained goalless.

The game looked to be heading for extra time when the Germans had a free-kick about 40 yards out in a central position. He went for goal and the ball bobbled off the pitch a couple of times before thumping into the corner of the net.

The view behind him showed Matthäus bent it round the wall which was poorly positioned. He hit it with such ferocity Zaki had little chance. 1-0.

It was cruel on the Moroccans, although as the game went on the Germans were more and more dominant. Again they were far from impressive yet it was a workmanlike performance.

Morocco bowed out with their heads held high. They had represented their continent with distinction and were far from humiliated.

West Germany would now meet Mexico in the Quarter-Finals.

Tomorrow sees the last two Second Round matches, with England in action against Paraguay and Spain taking on many neutrals’ favourites, Denmark.