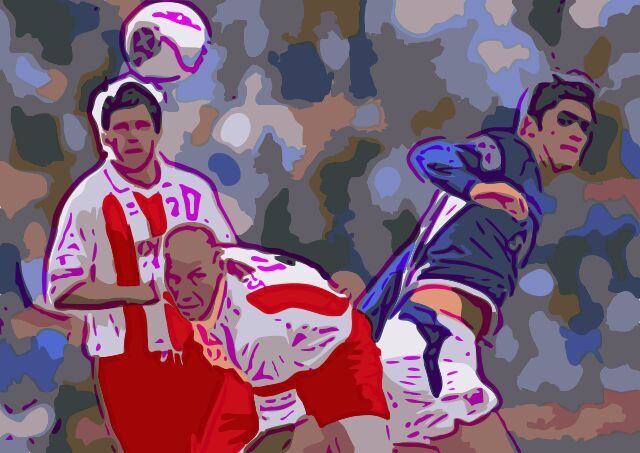 When League Two wrapped up in April 2022, a deep-seated rivalry was confirmed for another year.

Not many people are aware of the history around the feud between Carlisle United and Stevenage FC and why it is football’s greatest football rivalry.

Separated by a mere 272 miles, the Blues (Carlisle) first met Boro (Stevenage) during the 2004/05 season in, what was named at the time, the Conference National.

Carlisle found themselves in that division having lost their Football League status the year before, the first time since 1928, receiving the honour of becoming the first former topflight team to drop down to the fifth tier. Bouncing back at first attempt was a must for the Cumbrian side.

Stevenage, however, just completed a mid-table finish of 10th in the Conference National and were unlikely to push on for promotion to League Two in 2005.

So, the stage was set for the greatest football rivalry at the end of the 2003/04 season, before either side’s players had touched shoulders with one another.

It was 22 February 2005 when the two finally met for the first time in their history. Carlisle had the home advantage at Brunton Park, but it was Stevenage who took the three points with a 2-1 victory.

Interestingly, a fixture quirk meant the two met swiftly after that first fixture, only 11 days later, at Stevenage’s Broadhall Way on 5 March 2005. The score? You guessed it… 2-1 Stevenage.

Graham Westley’s men clearly had Paul Simpson’s number that season. Or so they thought.

In true rivalry-inducing style that season’s unlikely promotion chasers, Stevenage, made it to the Conference National play-off Final on 14 May against Carlisle.

The score? You guessed it… 1-0 Carlisle. A goal from club legend Peter Murphy, who went on to play over 400 games for Carlisle, was enough to save the blushes of the Blues and dash the dreams of Boro.

The twain did not meet for another seven seasons.

In between the third and fourth ever head-to-head of the clubs, Carlisle used the momentum from their play-off success and won League Two at the first attempt in 2005/06 thanks to 22 goals from (appropriately named) Karl Hawley and 15 from former Leeds United and Newcastle United striker Michael Bridges.

From there the Blues solidified themselves as a rollercoaster League One side. In 2006/07 they experienced their highest league finish in 22 years (along with their highest attendances in 30 years), securing 8th. The next season they went a step further making it to the League One play-offs, losing to the eventual defeated finalists Leeds.

Then came the downward slope as Carlisle narrowly avoided relegation by one point in 2008/09, followed by a 14th place finish then a slightly more promising 12th.

Stevenage, however, spent five years reeling from their play-off defeat to the Blues, with setback after setback trying to escape the Conference National.

In the 2005/06 season, they missed out on a play-off place by five points. They followed that up with a disappointing 8th place finish, but enjoyed some success by capturing the FA Trophy after beating Kidderminster Harriers 1-0 with an 88th minute winner from (appropriately named) Steve Morison.

In 2007/08 they once again narrowly missed out on play-offs by two points and then lost the 2008/09 play-offs to eventual beaten finalists Cambridge.

Then came the upward slope as Stevenage won the National Conference in 2009/10!

Much like their Cumbrian rivals, who no doubt remained stuck in Boro’s teeth like an unwanted popcorn kernel over the years, they only spent one season in League Two after making it to the play-off final. In the same way, Carlisle beat them in the National Conference play-off final back in 2004/05, Stevenage managed to destroy Torquay’s hopes with a 1-0 victory.

And so, the twain met once again with Stevenage on the upswing and Carlisle on the down.

Graham Westley was in his second spell with the Stevenage – after dalliances with Rushden and Diamonds and Kettering Town – clearly with the bit between his teeth. Carlisle manager Gregg Abbott, however, was determined to turn his side around.

After all the ups and downs, trials and tribulations, and the years of Stevenage desperate to get revenge for how long Carlisle kept them in the Conference National, the rivals finally clashed on 24 September 2011 at Brunton Park. The score? You guessed it… 1-0 Carlisle…

Can you imagine the frustration felt by Westley? It took another seven months until they battled again on 17 April 2012 and, fortunately for Westley, his Stevenage side grabbed themselves a 1-0 retribution.

Better still, after occupying 6th place (the final League One play-off position) for a decent period of the season, a dip in form after that defeat to Stevenage saw Carlisle miss out on the play-off place by just two points to, you guessed it… Stevenage.

Unfortunately for Boro, they were beaten in the play-off semis by, once again, eventual losing finalists Sheffield United.

Only two seasons later both Carlisle and Stevenage were relegated to League Two in 2014, where they’ve been ever since.

And what about the fans? They must hate each other with…

…nah, I’m only kidding, the fans don’t hate each other. Neither do the players, coaches, and managers. To be perfectly honest, the clubs aren’t even aware of the rivalry I just described above.

Circa 2012, I was watching Soccer Saturday on Sky Sports. On the righthand side of the screen, I saw Carlisle were playing Stevenage. I couldn’t stop smiling and instantly texted my best mate when I noticed they’d displayed it as CARL v STEVE.

That’s right. I’m obsessed with Carlisle United v Stevenage FC because I’m called Carl and my best mate’s called Steve. It’s just a sheer coincidence they’ve tangled enough that I could get half an article written about them.

Over the last 10 years, Steve and I have messaged each other back and forth when the clash of the season has been on, naturally backing our namesakes with all our might.

A cheeky bet has been placed here and there and I may or may not have called both club shops in March 2018 to purchase a home shirt from each to surprise Steve on his 30th birthday. Hilariously, Stevenage only had one prototype left after selling out earlier in the season, so he has a rubbish one with dodgy printing. Or, you could say, a unique present.

I hate to say it, but the fact both teams got relegated at the same time in 2014 cheered us up no end (sorry actual Carlisle and Stevenage fans) because that was when we moved in together in London and the rivalry could be enjoyed in person for a few years.

In February 2020, Steve moved to Canada. In an untypically blokey fashion for me, I struggled to communicate to him just how much that move was going to affect me. Much like Stevenage watching Carlisle get promoted in 2003/04, it was truly going to damage my form.

So, rather than healthily telling him I loved him and would miss him, I set myself a project in January 2020 that almost destroyed me.

Over beers from time-to-time Steve and I would get carried away imagining organising a CARL v STEVE football match with only Carls playing for CARL and Steves playing for STEVE.

Could there have been a better leaving present than sorting that out as a surprise? No way.

So, I got to it. I emailed the few Carls and Steves I knew asking if they would be up for a 5-a-side game of football on 1 February in London, playing in a team made up only of people with their same name. They all said they were not free.

So, I messaged my loved ones asking if they knew any Carls or Steves. Some did! None of them wanted to play.

So, I messaged everyone at work asking if they knew any Carls or Steves. Some did! None of them wanted to play.

So, I went on Facebook and Twitter and searched the names Steve and Carl and messaged the several hundred people I could find explaining the situation.

So, I trawled through football forums contacting anyone called Carl or Steve. I emailed local football clubs and 5-a-side organisations. I went on a website where you can add your name for a Sunday league team to contact you if they need a player and I messaged over 200 Steves and about 50 Carls. Nobody got back to me.

And then it happened, four days before kick-off.

A bloke called Steve on Facebook replied: “I’m in.”

A woman from work emailed: “My partner would love to join.”

My sister-in-law replied: “My mate Steve has never played football but said he will because it sounds nice.”

My wife’s friend’s boyfriend replied: “My mate Steve will be hungover, but he’s up for it.”

I sent my last message to the last Carl at 1 am the day before kick-off but had to resign myself, to a fact I always knew deep down, that Steves are better than Carls.

Fortunately, I’d already lined up the Plan B of getting some of our mates to pretend they were called Carl for the day.

I was gutted because the dream felt over. I poured a month of sweat and tears into the idea and it didn’t pay off. Steve’s a details guy, he loves the little touches, and I thought he would be disappointed it wasn’t completely pure to our vision.

I met him and his wife at Waterloo around lunchtime. He had no idea what was happening so obviously ate Burger King fries and necked a coffee 30 minutes before the game.

Meanwhile, my wife and makeshift Carls made it to Vauxhall’s community football cage to secure the space and meet the four Steves who had no clue who they were looking for (what absolute legends).

Steve’s brother (Crewe)Alex(andra) was also there in a referee’s kit, along with a match reviewer, photographer Rosie, an orange slice distributor, and at least 10 fans.

After spotting the five Steves in red bibs warming up with the five Carls in blue bibs, it didn’t take long for Steve to start smiling. But there was no time for hugs. The two of us got kitted up and the game of the decade began.

We couldn’t let it end there. And so, it went to penalties, and I take great pride in telling you that I, Carl, saved a penalty from the Steve who had never played football before, and scored the winner against my best friend Steve.

The Carls lifted the trophy, then it was time for hugs and beer and laughing and telling the truth.

I told Steve how I was going to miss him. I told him I loved him. I told him that I’d been using the CARL v STEVE match as a charity fundraiser for Rethink Mental Illness because he’d done more for my mental health than he realised.

It was a fitting way to put a pause to the greatest rivalry in football until we can have a rematch down the line.

But the best part? Steve doesn’t even like football. He just likes being silly.