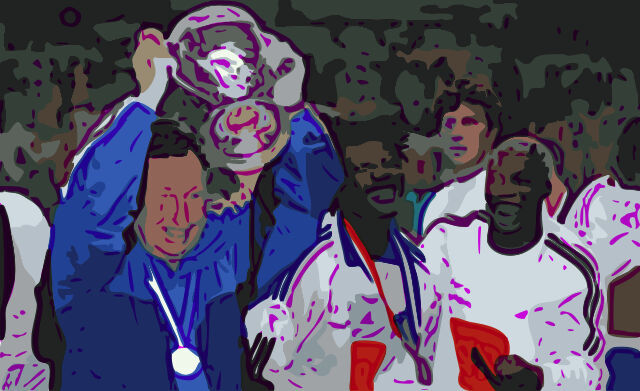 When one thinks of long-serving French football managers, Arsène Wenger will likely be the first name which springs to mind. For 22 years, the man who José Mourinho unflatteringly dubbed a “voyeur” was the keeper of the keys at Arsenal, guiding them to glorious periods of success in the late 1990s and up to the mid-2000s and overseeing a smooth transition from Highbury to the Emirates Stadium.

The final few years of Wenger’s reign were tarnished by swarms of Gooners calling for him to step aside as the club’s 19-year sequence of Champions League football came to an end, which the Frenchman ultimately did in 2018. So extensive was his stay at Arsenal that, in the likes of Konstantinos Mavropanos, Joe Willock, Eddie Nketiah and Reiss Nelson, he called upon players who hadn’t even been born when he first marched into Highbury in September 1996.

If Wenger’s time at Arsenal felt interminable, though, try finding an adjective to describe the managerial reign of Guy Roux at AJ Auxerre.

Now 83, his earliest childhood years encompassed World War II, during which his father was captured and taken prisoner. His family lived close to the France/Germany border but relocated to a small town just 10 kilometres from Auxerre during the war. Once peace had been restored across Europe, a young Roux developed a passion for football and had a fleeting playing career in the nether regions of the French football pyramid.

In 1961, when he was still just 22 years old, he put in an audacious application for the vacant manager’s job at Auxerre, despite having scant coaching experience. However, he did promise to run a tight ship at the club, which was then an amateur setup playing in regional leagues. He even promised to ‘do whatever is needed for the club, even chop the wood’ if his application were successful and was willing to take on the job for a meagre salary. Something he said must have struck a chord with Auxerre chief Jean-Claude Hamel, as this seemingly unlikely candidate was handed the managerial reins.

Indeed, the young manager had only recently returned to France from a month in south London, where he observed training at then-fourth tier Crystal Palace, having written to their manager Arthur Rowe asking if he could facilitate an internship with the Eagles as part of a research project.

However, Roux quickly gained a reputation for extraordinary dedication to the Auxerre cause. Aside from his customary training duties, he would run the club’s switchboard in the evenings after the rest of the staff had clocked off, have his player’s wives make bibs for training and even cooperate with local farmers to have goat manure delivered to the club’s playing facilities. He was literally dealing with all sorts of crap which other managers wouldn’t touch with a 10-foot pole.

Roux was forced to take two years out due to conscription in the early 1960s but, once that service had been completed, he instilled a greater sense of professionalism within the club and got them promoted to the third tier in 1970. Four years later, they made it into Ligue 2, which brought with it an entry into the professional ranks. A decade which began with them as a fourth-tier club ended with them featuring in the Coupe de France final, having seen off the likes of Lille and Strasbourg en route to the decider, where they succumbed to a Nantes side who were then one of the country’s elite.

Far from wallowing in self-pity after that near miss, though, Auxerre could call themselves a Ligue 1 club by the summer of 1980 after yet another promotion under Roux, who was now closing in on completing two decades in charge. It was in that same year that the manager made what seemed a baffling decision at surface level, but would ultimately come to be regarded as a visionary moment.

Auxerre were presented with the chance to sign Olivier Rouyer, a striker with the French national team, a sure sign of how the club’s status had risen enormously under Roux. The manager turned down that prospective transfer, instead insisting that finances were put towards opening a state-of-the-art academy. Over the subsequent years and decades, that academy churned out talents such as Alain Goma, Pascal Vahirua, Djibril Cissé, Philippe Mexès and Teemu Tainio.

That’s before we even get to perhaps its two most famous products. Auxerre was the starting point for the career of Basile Boli, whose goal won the 1993 Champions League final for Marseille, still the only time that a French club has conquered Europe. The academy also produced a maverick talent by the name of Eric Cantona, whose innate genius ultimately made him a poster boy of the massively successful Manchester United team of the early-to-mid-1990s under Sir Alex Ferguson.

While those future stars were making their way through the academy ranks, Auxerre were establishing themselves as mainstays in Ligue 1. A third-place finish brought UEFA Cup qualification in 1983/84, a competition for which they qualified several times over the subsequent decade, even reaching the semi-finals in 1993. They took some significant scalps on the European stage, too, beating the likes of AC Milan and Ajax, all while never enduring an uncomfortable season on the domestic front.

Roux’s peak (and going out on a high)

Incredibly, the best was yet to come. A Coupe de France triumph in 1994 was special, but the peak of what was by then Roux’s 35-year Auxerre reign arrived two years later. Despite having a meagre squad and losing 10 league games, they saw off the challenge of defending title holders and overwhelming favourites Nantes to become champions of France, adding another cup triumph for good measure. From the humble amateur outfit that Roux took over in 1961, Auxerre were now the country’s best team, one graced by the likes of Laurent Blanc and Lilian Laslandes. They acquitted themselves well in their maiden Champions League campaign, reaching the quarter-finals before elimination at the hands of eventual champions Borussia Dortmund.

Roux was the recipient of individual honours such as the Légion d’Honneur in 1999 and the UEFA President’s award a year later. He took a sabbatical from the sideline in 2000 to assume a sporting director role at Auxerre, but within 12 months he was back at the coalface and leading another fine team into his fifth decade of management at the club. A side featuring Cissé, Mexès and Tainio reached the Champions League again in 2002/03 and won two more Coupes de France.

The latter of those in 2005 would prove to be Roux’s final match of a 44-year managerial reign at Auxerre which encompassed more than 2,200 games, including a European record of 890 in his country’s top flight. Unlike Wenger, who announced three weeks before his denouement against Huddersfield in May 2018 that he was stepping aside, Roux made his retirement decision public the morning after his team had beaten Sedan in the 2005 cup final.

It was a decision that angered some players, who felt that the manager had duly made the victory parade all about himself with his shock announcement; and for all his unique longevity and undoubted career accomplishments, it was far from the only time that Roux would be viewed with scorn by some within and outside of Auxerre.

Tying in with how he promised to run the club frugally upon getting the manager’s job in 1961, he earned a reputation for being overly parsimonious when eating out with company. There were even anecdotes that, when he invited journalists to dine with him, he would call for the bill, only to write a message on it and duly bolt from the restaurant.

One reporter from The Guardian noted how, upon visiting Auxerre to research an article on Roux, the manager’s reputation was so intimidating that middle-aged adults on the club’s staff quivered with fear around him.

He also had an arch-disciplinarian reputation which would make Ferguson seem positively liberal. When the aforementioned Boli was an academy player, he was spotted climbing out of the facility after dark and driving around town on a moped. When word got back to Roux, he chained Boli’s moped to a nearby railing and deducted the cost of the lock from the youngster’s wages.

The manager also liaised with toll booth operators on the hour-long road between Auxerre and Paris to try and catch out players who thought that they could sneak into and out of the vibrant capital city. He was even known to check players’ cars at 7am to see if the engine was warm, or if there had been a significant increase in the odometer from the day before. Basically, you got away with nothing under Roux’s watch.

A long time in football

Despite this perception as a tyrant, a 44-year stint with one club is nothing short of incredible. You only have to look at where Auxerre were when he took over in 1961, compared to where they were at his mid-90s peak, to see just how extraordinary a job he accomplished. The same goes for the fortunes of the club ever since he stepped down 17 years ago.

They were relegated in 2012, ending a 32-year stay in Ligue 1, and it is only this year that they have ended their decade-long exile from the top flight, even finishing as low as 15th, 16th and 17th in Ligue 2 during that time. There are no longer any Cantonas, Bolis or Cissés coming through the ranks.

When Guy Roux became manager of Auxerre in 1961, John F. Kennedy was just beginning his reign in the White House, the Berlin Wall had yet to be built, the farthing had only just been phased out in the UK and Johnny Haynes became the first footballer to earn £100 per week. By the time Roux stepped down in 2005, YouTube had been established, photography via a mobile phone was commonplace, Chelsea had been revolutionised by the takeover from Roman Abramovich and music could be consumed via a handheld device called the iPod.

Imagine if Wenger had ultimately stayed at Arsenal for another 22 years after 2018. That is how long Roux was manager of Auxerre. Fearsome and crotchety he may have been, but the transformative effect he had within the French club football scene ensures that this 83-year-old will be recalled as a giant of the game in his homeland long after he has passed.