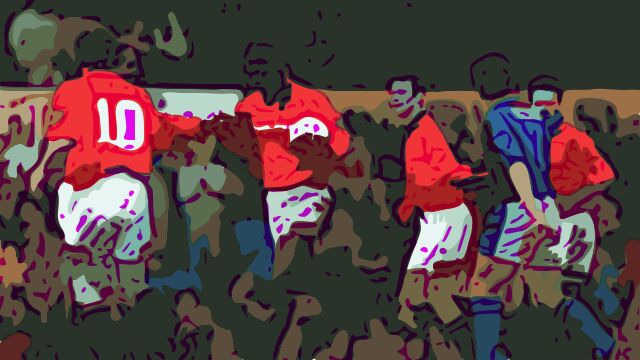 The Premier League era of English football is synonymous with Alex Ferguson and his Manchester United sides. Over the course of his career at Old Trafford, Fergie chopped, changed and reinvented his team. The early part of the Premier League era was dominated by Fergie’s Red Devils. The first two league titles were won by United, and this after a 26-year wait for English football’s biggest prize.

The 1994/95 season followed Manchester United’s league and cup double success from the previous campaign. All the indications were that United would possibly go on and win a third straight title. In the end, it was not to be, but one game emphasised how good United were during this time. On 4th March 1995, United played Ipswich Town at Old Trafford and beat them 9-0.

The calendar year of 1995 had started in bizarre fashion for United. On a cold January night at Selhurst Park, Eric Cantona carried out his infamous kung-fu kick on Crystal Palace supporter, Matthew Simmons. The press, the FA and many of the wider footballing public were outraged and wanted United’s mercurial Frenchman to be banned for life. As always, Fergie, his players and the club’s support rallied around their main man.

As it turned out Cantona was banned by the FA. It wasn’t a lifetime ban like some wanted, but instead a 9-month ban from playing football worldwide. This news rocked the club and its supporters. The very same month as the incident at Palace, United splashed out a British record £7m, with Keith Gillespie, costing £1m heading in the opposite direction, to sign prolific Newcastle United forward Andy Cole.

The move surprised many in the game, not least the supporters who gathered at St James’s Park to ask ‘King’ Kevin Keegan just what he was thinking. It was noted that United actually wanted Stan Collymore, who was having a stellar season for Nottingham Forest. His performance at Old Trafford in the December was top class, getting himself on the scoresheet. I remember watching his goal in this game hit the back of the net in their purple and green away kit. In getting Cole, however, United had signed a real top quality operator, and in Cantona’s absence in the months to come, he would become even more important to the side during the current campaign and beyond.

At the end of that eventful January in 1995, United were trailing Kenny Dalglish’s Blackburn Rovers by 4 points. The East Lancashire club bankrolled by local businessman and club supporter Jack Walker’s millions had been progressing for the past couple of years. The forward line of Alan Shearer and Chris Sutton were banging in goals for fun. They had real quality service from out wide in the form of Jason Wilcox and Stuart Ripley, plus Tim Sherwood and David Batty in the centre of midfield. The rock-solid Scottish centre-half Colin Hendry at the heart of the defence, Graeme Le Saux at full-back and Tim Flowers in goal. These were heady times at Ewood Park.

By the time Ipswich Town came to Old Trafford in the March, United had just been beaten 1-0 at Goodison Park by Everton with the obligatory goal by Duncan Ferguson against them. The same day, Blackburn drew at home to Norwich and it felt like a missed opportunity. There was still a three-point gap to Blackburn at the summit. There was an air that maybe this was actually going to be Blackburn’s year.

There had already been some poor results during the season coming into this game such as losing to Ipswich themselves at Portman Road in the September and being knocked out of the Champions League at the group stage, including a surprise 3-1 defeat to the Swedes IFK Gothenburg. With United failing to capitalise the week before, when Blackburn had drawn at home to Norwich City, they had a point to prove. They could not afford any more slip ups. The visitors meanwhile were second from bottom and eight points from safety.

The game will always be remembered for the astonishing 9-0 scoreline and Andy Cole bagging himself five goals. By halftime, United were already 3-0 up. The first goal of the game came from Roy Keane on 15 minutes. The opener was made by Mark Hughes who found the Irishman on the edge of the box who drilled past Ipswich’s Canadian ‘keeper Craig Forrest, who was wearing a pair of black tracksuit bottoms a la former Chelsea goalkeeper Dmitri Kharine.

The second goal was Cole’s first of the game. It came via an initial block on the half way line, then sprint down the left from Ryan Giggs who centred for Cole to glance into the corner with his right foot, subsequently doing a roly-poly as he tumbled to the turf. This was just four minutes after the opener. The visitors knew they were in for a long afternoon and United were in the mood.

The third goal of the afternoon arrived in the 37th minute and was scored again by that man Cole. A dinked cross into the area by Andrei Kanchelskis was met by an overhead kick from my childhood hero Mark Hughes. Unfortunately, he was denied another world-class goal to add to his collection by the crossbar. The ball fell to Cole who chested and calmly slotted away just as Ipswich’s John Wark slid into him in a desperate attempt to avert the inevitable. Going in at the break the result, if not the scoreline, seemed nailed on.

There hadn’t even been ten minutes gone in the second half before Andy Cole had his hat-trick. More excellent work from Hughes on the edge of the area preceded a pass out wide on the right to Denis Irwin. His ball into the box was met by the head of Cole who had his third of the game. The fourth followed just two minutes later. Another trademark run from Ryan Giggs down the left, teasing the Ipswich defence, before a cross which eluded Cole and Brian McClair, but which was turned in, off the bar, from a tight angle by Mark Hughes. Fifty-five minutes in and five up. This wouldn’t be the last time the number five became an important figure in this match.

It wouldn’t be long before Sparky had his second of the game. Driving through the middle, Brian McClair set Ryan Giggs away whose effort looped up off Craig Forrest and into the path of Hughes, who beat David Linighan in the air, to nod home in front of the scoreboard end. It was becoming very embarrassing for Ipswich and their manager, George Burley.

Just six minutes later in the 65th minute, Andy Cole had his fourth of the game. He started the move passing inside to Mark Hughes. The Welshman’s beautifully weighted pass into the area found Brian McClair whose effort was charged down by Craig Forrest, but the loose ball fell to Cole who had continued his run into the box since starting the move, and unmarked and untracked he fired into the net.

The eighth goal of this remarkable game came after Craig Forrest had ran out of his goal to close down a long pass forward and handled the ball outside of his area. As the referee shown him a yellow card, Paul Ince snatched the ball from under his arm and quickly placed it down and shot into an empty net as Forrest was trying to make his way back to his goal. The day was becoming not only a nightmare for Ipswich in general, but for their Canadian goalkeeper too.

The United supporters inside Old Trafford chanted “we want nine”, whilst the Ipswich supporters joined in with chants from the home crowd of “you’re going down” and “you’re s**t and you know you are”. The ninth and final goal of the game came three minutes from time. A Ryan Giggs corner was initially met by Paul Ince, with the ball dropping to Andy Cole once more. With his back to the goal, he controlled on his chest, swivelled, shaking off Frank Yallop in the process and fired home for United’s ninth goal of a thoroughly dominant performance and his fifth goal of the game.

In the early days of the Premier League era, because obviously top-flight football didn’t exist pre-1992, this became the new competition’s highest winning margin and Cole became the first player to score five in a Premier League game. A record that wouldn’t be matched until Alan Shearer netted the same amount in one game for Newcastle against Sheffield Wednesday in 1999. This was a statement display from Fergie’s side, showing just how good they were during the early 1990s and aimed to seriously put the pressure on Dalglish’s side in the title race. As a young supporter, sat in the scoreboard end with my dad watching the 9-0 demolition, the sky really did seem the limit for this United side.

Unfortunately, it was not meant to be come the end of the 1994-95 season as Blackburn won their first league title since 1914, the year the first world war broke out, by just a single point. Yet those first few seasons of the Premier League really showed United’s resurgence, dominance and what was to come under the now Sir Alex Ferguson. The 9-0 dismantling of Ipswich on that chilly Saturday afternoon in March 1995 really emphasised what the club had become again and where it was heading once more.