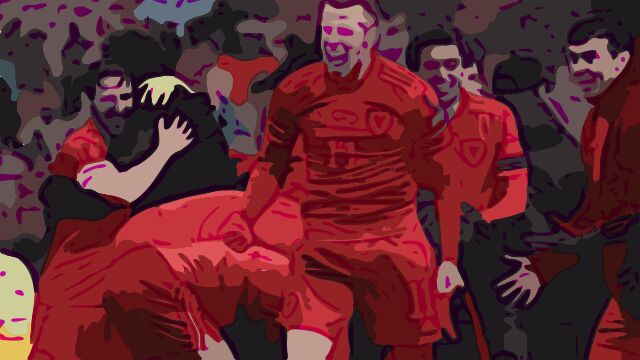 So, it’s hard to decide which is worse. A bunch of kids booing England taking the knee ahead of their Nations League match against Hungary or the performance served up by Gareth Southgate’s squad of English hopefuls.

Mind you, what did we expect? From the team I mean, not the Hungarian fans. There was a small part of me that smirked when I heard they’d found a loophole around UEFA’s ‘behind closed doors’ ruling because honestly, who doesn’t enjoy UEFA being made to look like mugs (though, in hindsight, they are more than capable of achieving that themselves). Then I remembered why Hungary were banned from having fans at the game in the first place and it made the fact that 36,000 people, even if all but 10% of them were under 14, even more ridiculous.

Given that England had lost once in the last 22 matches, and that being the penalty shoot-out defeat to Italy in the Euro final, you can understand why they tried to play with an assumption that victory was a case of turning up. Throw in the fact that they’ve got four matches in a week bunged on to the end of a long old season for many of them, and a lethargic, massively under-par performance was no real shock.

I know we are obliged to like Southgate as a man – and it is impossible not to given the very sensible soundbites he delivers on a whole range of subjects that have little to with football – but tactically, there are bigger question marks over his head than that of Andy Carroll’s soon-to-be-done nuptials.

Jude Bellingham, for example, is the answer to England playing with more freedom in the middle of the pitch – if, and it is a big Southgate shaped if, he is allowed to play the role he plays for his club, Borussia Dortmund. Picking him, and then expecting him to do exactly what Kalvin Phillips does in the Phillips/Declan Rice duo does not make sense. If that’s what you want, Gareth, just pick Phillips.

Justin James has barely returned from injury at Leicester City and was thrown in to see if he could be a better “right back having to play left back because we don’t have any left backs fit” option than Kieran Trippier. Sadly, his niggly injury picked up in the first half stopped further embarrassment from a Hungarian league winger in the second.

Ironically, it was England’s right back who is meant to be better defensively than Trent that gave away the cheap penalty that Hungary scored.

If England head to Qatar with Conor Coady and Harry Maguire as the starting central defenders, we’ll do well to get out of the group – Southgate’s loyalty to players who have performed for England in the past is laudable but come on now. Maguire is in a horrendous moment in his career and hopefully new Man United boss Erik Ten Hag can fix him up. Coady, no matter how well he talks and organises and is a leader is not a central defender in a back four.

One of eight teams that could win Qatar 2022, apparently. Based on that, they’ll do well to make the last eight. But a week is a long time in international football, especially when there’s three more matches to come.

One team that will definitely not win the World Cup later this year is Scotland. We’ve heard of strikerless formations being used by Peppy G at Man City – Steve Clarke felt their playoff semi against Ukraine was the time to try and play a midfielderless formation.

Ukraine had absolute freedom of the park at Hampden and comfortably eased their way through to a final showdown with Wales.

Gareth Bale was in no mood for apologising after Wales booked their place in Qatar. Their win over Ukraine was tense and the end result is that Balo has to now decide which of the “loads” of offers he needs to accept to stay in shape for the winter bonanza.

It was Bale’s free-kick that Wednesday night’s hero Yarmalenko turned into his own net to give Bobby Page’s men a first-half advantage. Wales hung on to become the first group of Welsh players to qualify for a World Cup since 1958, just in case you weren’t aware. I mean, you’d have thought it would have been mentioned.

The transfer rumour mill is cranking up week on week and that means that at least the next three paragraphs will be full of Manchester United related fluff.

The club have been offering Aaron Wan-Bissaka out to anyone that could be interested, hoping that said interested parties may not have spotted that England’s best defensive right back can no longer remember how to defend. They are also keen to get shot of Brandon Williams, relegated when out on loan to Norwich.

Ten Hag is also willing to go head-to-head with his former employers to sign Tottenham’s Steven Bergwijn. Sure, United’s current reset will be super successful if they snap up Spurs rejects.

Sadio Mane has come up with a cunning plan to leave Liverpool for Bayern Munich. He’s taken it back to the early days of X-Factor and asked the public (of Senegal) what they’d like him to do. 70% said do one from Anfield, incidentally. King Klopp is lining up Leeds’ Raphinha just in case somewhere in Sadio’s contract there is a Senegal public vote release clause.

Barcelona have kindly said to Mohamed Salah that they don’t mind waiting until next summer for him to join them. No word on what the Egyptian public feel about that.

The Liverpool public will be gutted to say goodbye to cult hero Divock Origi who is off to AC Milan. Who will beat Everton now?

Chelsea want to get Boehly busy and are lining up Barca’s problem child Ousmane Dembele as their first new face on a free. They also like the look of RB Leipzig defender, Josko Gvardiol.

Premier League new boys Nottingham Forest, welcome, believe that Burnley’s Nick Pope is used to being peppered often enough to be the ideal shot-stopper for their relegation campaign next season.

Spurs, Newcastle and Aston Villa all want to give Belgian Yannick Carrasco a break from being shouted at by Diego Simeone. They’ll happily sign the Atletico Madrid winger. The Magpies also want to take Nathan Ake from Man City, much to Dan Burn’s disappointment.

Brentford, rarely mistake makers in the transfer market, want to sign Watford’s relegated striker Emmanuel Dennis which immediately gets filed under the “yeah, that would work” heading.