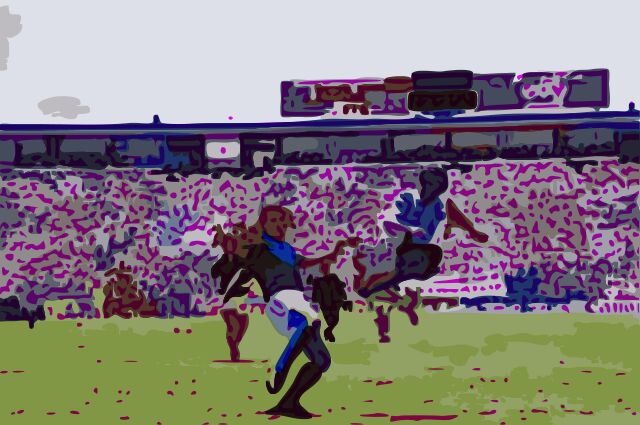 By now every team has played their first match in this World Cup. Today was the most anticipated day of the group stage. In Group A we had Italy v Argentina and in Group C we had France versus the USSR. It should be quite a day.

Day six of the tournament saw teams make their second appearance, and one of the most anticipated matches of the competition was played in Puebla. Right from the draw, this match had been singled out as a potential classic. The last two winners of the World Cup going head-to-head in the group stage. Possibly not since England met Brazil in Guadalajara almost 16 years previously, to the day, had two such giants of the world game met in the first phase.

Of course, Maradona was the focus of attention. Argentina’s captain was now playing his domestic football in Italy with Napoli.

This was now the fourth successive World Cup these two had met. In 1974 they drew 1-1 in Stuttgart, then in 1978 Italy won in the River Plate Stadium. Both games at the group stage. In Barcelona four years later, Italy turned their campaign around with an impressive 2-1 win in the second phase. In fact, it had been 30 years since Argentina last beat Italy so this was a crunch match.

You’d have thought it was more deserving of a bigger venue, but 32,000 packed into the ground in Puebla. Six minutes in and the first moment for discussion.

Conti picked up the ball on the right of the area. Garré tackled him and as the ball looped up it hit Burruchaga on the arm. These were the days when handball needed to be deliberate. This certainly wasn’t. But of course, Argentina did get away with a handball later in the tournament!

Altobelli stepped up to take the penalty. He had to deal with some gamesmanship from Pumpido in the Argentine goal. With the keeper a step or two off his line, Altobelli calmly slotted it in for the opening goal.

Argentina began to cause havoc in the Italian area. A couple of magic touches from Maradona certainly gave them something to worry about. Valdano and Batista had attempts on goal without really troubling Galli.

Then with 10 minutes of the first half remaining, Borghi clipped a ball over Scirea’s head for Maradona to run onto. He hit the ball on the top of the bounce and knocked it past Galli into the far corner. It was a typical moment of Maradona magic, with a sudden burst of pace catching the defence cold.

Then just before the break, Valdano missed a golden opportunity to put the Argentines in front. Ruggeri got down the right and crossed into the area, where Valdano was unmarked. He threw himself at the ball but it went wide.

In the second half, Bruno Conti hit the post. Galderisi nodded the ball down to him and his left foot shot hit the post full-on, but the rebound fell to an Argentina shirt.

Ruggeri and Valdano had headers which should’ve troubled the keeper but went over. Bagni shot over during a free-kick routine. In the end, both sides settled for a draw. The fifth successive draw in the group stage at a World Cup for Italy. As Argentina had won their first match they were relatively confident in going through.

The next game saw the other two teams in Italy and Argentina’s group take to the field. Bulgaria scored a late goal to earn a point against Italy in their first match, whereas South Korea were well beaten by Argentina. With Italy just drawing their second match, a Bulgaria win could see them move above them with a game to go.

A thunderous downpour rendered the game virtually unable to be viewed as a spectacle. Bulgaria had prepared for the tournament with a friendly against North Korea. They won 3-0 and 11 minutes into this one, it looked like it was time well spent. A cross from the left high into the area was poorly dealt with by the keeper. His attempt at a punch just sent the ball into Plamen Getov’s path. The Spartak Pleven player simply lifted it into the net.

Getov had been his club’s top scorer in the season just ended, which saw Pleven stay up by a point. He’d scored twice in qualification and Bulgaria had good reason to believe they could kick on from there.

But the South Koreans were determined to make more of a game of this than they had against Argentina. They forced Mikhailov into several important saves. Then with 20 minutes to go Kim Jong-Boo equalised.

They had a free-kick just into the Bulgarian half. It was launched into the area where the Bulgarian defence failed to deal with it. When it came back into the box, Kim controlled it on his chest before turning it past the keeper to level things.

Neither side could force the advantage and the game ended in a draw. All four sides were still very much in this going into the final round of matches.

10th June: South Korea versus Italy and Argentina versus Bulgaria.

The final game of the day was between two sides who both won their opening games. The French struggled to get past Canada, winning 1-0. Whereas the USSR were far more clinical in thumping Hungary, 6-0.

France made two changes from the Canada game. William Ayache came in at the back to replace Thierry Tusseau. In attack, Yannick Stopyra was preferred to Dominique Rocheteau. The Soviets were unchanged.

It was the Soviets who had the best of the opening exchanges. Zavarov headed straight at Bats, before Aleinikov fired a fierce shot from 25 yards out which just whistled over the bar.

They went close again when a cross from the right into the area saw hesitation from the French. They allowed Demyanenko to come in at the far post, but he couldn’t divert it on target.

The French eventually came into it. Unfortunately, their best chances seemed to be falling to the wrong striker as Stopyra squandered a couple. One of them was when Platini floated a free-kick into the area. The next time they had a free-kick in a similar position just outside the area, Platini chose to go for the shot. It just went wide when all were expected to see the net bulge.

Ten minutes later they had another free-kick, again in the same position. Again Platini went for the strike and it thumped against the post. He was getting closer.

The first half ended goalless. Eventually, the deadlock was broken and how. Eight minutes into the second half saw the Soviets attack. They moved the ball across the pitch from right to left just outside the French area. It was played back by Belanov for Rats to come up from the back. Rats struck it ferociously and it flew in past Bats left hand. This gave us the iconic commentary line;

It was from about 35 yards out and there was no stopping that.

Soon after, France had yet another free-kick just outside the area. Platini chose to curl this one but it just went the wrong side of the post. The French didn’t have to wait long for their equaliser. Predictably Platini was involved. But so was Giresse and as Platini played the ball back to him, Fernández chose his moment to make a forward run.

Giresse held off long enough until Fernández was in the area, then found him with a delightful pass and Fernández slotted it past Dasaev for the equaliser.

Papin then had a great chance to put the French in front. Stopyra had a fine run down the right-wing, then crossed into the six-yard box. Papin got ahead of the defence and got a good contact with his head. But the Soviet keeper, Dasaev was equal to it and he pushed it away.

It was the Soviets who then seemed to be pushing for the winner. They had a succession of corners, with one troubling Bats who almost pushed it in only for Bossis to head it off the line. Eventually, the game ended level and both teams were fairly happy with that.

9th June: Hungary versus France and the USSR versus Canada.

For the second World Cup running Italy have begun with two draws. They should be able to beat South Korea in their final match. Argentina have the comfort of knowing a draw against Bulgaria would also be enough for them. In Group C France and USSR are in control. If Hungary and Canada draw tomorrow that virtually confirms them both as going through. Brazil are in action again. A win gets them into the next stage. For England, they have a crucial match against Morocco. Defeat to Portugal in their opening game makes it vital they get a win. If Morocco win, then that’s probably it for Bobby Robson’s men.