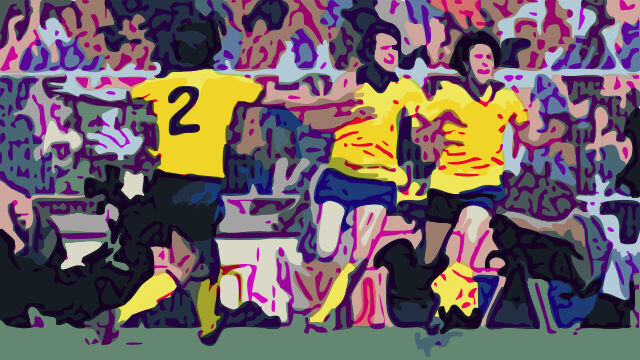 As the 2021-22 season comes to a close, I thought a trail back through time at some of the FA Cup campaigns of lore (well, of my childhood and adolescence, anyway) might be in order.

Deciding to kick off with the 1978-79 season simply because it coincided with my last year at primary school and so has remained as fresh a memory as any from my misspent youth.

As any true Gunner knows, the cup that year was won by Terry Neill’s Arsenal side which beat Manchester United 3-2 in the final, and in so gained some consolation for the surprise 1-0 defeat under the Twin Towers a year earlier, at the hands of Ipswich Town. A not particularly inspiring match came alive in the last five minutes when, with Arsenal winning 2-0, Manchester United scored twice to seemingly snatch at least extra time from the jaws of defeat. Rather amusingly, however, having done the hard part, United then switched off and allowed Alan Sunderland to score a last-ditch winner.

As interesting as the last five minutes of the final were, the competition as a whole over the season threw up more twists and turns along the way.

Starting as usual in the dying embers of summer with the preliminary rounds, the 1978-79 FA Cup was competed for by teams as diverse as Mangotsfield United and Tow Law Town. Reading through the results of the Preliminary Round, the game between Consett and Eppleton Colliery Welfare stands out. Having achieved a credible 1-1 draw away from home, Eppleton might have been forgiven for fancying their chances at home in the replay. No doubt the subsequent 7-0 defeat came as a shock, therefore.

Eventually, the number of non-league sides left in the competition was whittled down to 28, and these joined the 48 members of the old Third and Fourth Divisions. In addition, there were also the two finalists of the previous season’s FA Trophy, Altrincham and Leatherhead, and, for some reason, Scarborough and Wycombe Wanderers who were also given byes, in the First Round Proper.

Highlights of the First Round included non-league sides Droylsden and Worcester City beating league opposition in the form of Rochdale and Plymouth Argyle respectively, while Maidstone would beat Exeter in the Second Round.

The Third Round of the cup was played on January 6, 1979, but because of the adverse weather conditions in what was a truly awful winter, only four of the scheduled 32 matches were able to take place as arranged. With unlimited replays being on the agenda in the event of a draw, unsurprisingly the cup that year soon fell into disarray and it was not until early February that all third round ties were settled.

Highlights of the third round included Arsenal’s titanic five-match struggle to get past Jack Charlton’s Sheffield Wednesday side, then in the Third Division. A 1-1 draw at Hillsborough in the first game was followed by an identical scoreline at Highbury four days later. Further draws at Leicester City’s neutral Filbert Street by 2-2 and 3-3 scoreline followed, before the Gunners finally prevailed by a 2-0 scoreline.

The holders of the cup, Ipswich, began their defence of the trophy in an unconvincing manner in scrambling to a 3-2 home victory over lower league Carlisle United. Favourites for the cup, Liverpool, nearly came unstuck at the first time of asking as they were fortunate to skate their way to a goalless draw at Southend United on a snow-covered pitch before winning the replay. The real fun, however, concerned the last two non-league sides left in the competition, Maidstone United and Altrincham.

Both were drawn away to London opposition in the form of Charlton Athletic and Tottenham Hotspur, and both emerged with more than a smattering of credit having obtained 1-1 draws. On a truly embarrassing night for Spurs, a side laden with the artistry and skills of such players as Osvaldo Ardiles, Steve Perryman, and Ricky Villa were unable to overcome the northern side in front of more than 30,000 at White Hart Lane and so a replay at Maine Road was needed. Here, at least, the form book prevailed as Spurs ran out 3-0 winners.

Charlton Athletic were in the Second Division when Maidstone United came to the Valley for their rearranged FA Cup Third Round tie, and with the combined attacking talents of Derek Hales and Mike Flanagan up front, they were expected to sweep the part-timers aside. Unfortunately for the Addicks, they ended the game with only nine players as Flanagan and Hales were both sent off for fighting – each other! Charlton managed to scramble through the replay by a 2-1 scoreline.

The fourth round also suffered from the bad weather and only eight of the scheduled sixteen ties were played as scheduled on January 26, 1979, and all ties were not completed until the beginning of March. This time Arsenal made short work of progress, beating Notts County 2-0 at Highbury, while Tottenham were once more taken to a replay by lower-league opposition in the form of Wrexham.

Liverpool made hard work of beating Blackburn Rovers by the only goal of the game, while Ipswich needed a replay to get past the previous season’s beaten semi-finalists, Orient. The tie of the round was probably the clash between title-chasing West Bromwich Albion and Leeds United. Played at the Hawthorns, the first game was a cracker that ended in a 3-3 draw. The replay was won 2-0 by the Baggies to set up a fifth-round clash with Southampton.

Last Sixteen and the Quarter Finals

The last sixteen then, and most of the ‘big guns’ were still involved. Arsenal and Nottingham Forest met in the big clash of the round at the City Ground. Forest were defending League Champions and still had hopes of catching Liverpool and West Brom at the top. As they were in the last eight of the European Cup and also through to the League Cup Final, hopes were still existent of an unprecedented quadruple. It was seen as a minor shock, then, when Arsenal prevailed 1-0 winners.

Liverpool, Tottenham, Manchester United, and Ipswich all successfully negotiated fifth round ties to join Arsenal in the last eight, as did Southampton, Wolves, and Shrewsbury – the last non-top flight side in the competition.

With Wolves meeting – and beating – Shrewsbury 3-1 after being held to a 1-1 draw at Molineux, it was left to the remaining six sides to clash in all-First Division clashes. Ipswich took on title favourites before more than 30,000 at Portman Road, but were undone by a single Kenny Dalglish goal, while Arsenal were once more taken to a repay – this time by a dogged Southampton side that had also made it to Wembley in the season’s League Cup. An ultimate 2-0 Arsenal victory at Highbury just two days after a 1-1 draw at the Dell was sufficient to see the Gunners into their fifth semi-final of the decade.

The other match saw a titanic tussle at White Hart Lane between Tottenham Hotspur and Manchester United. In front of approximately 15,000 travelling fans, A second-half goal secured by Mickey Thomas brought the sides back to Old Trafford four days later where two unanswered goals by Sammy McIlroy and Joe Jordon qualified United for a semi-final showdown against old foes Liverpool.

The Last Four and a Clash of the Titans

So while Arsenal and Wolves were squaring off at Villa Park, the two northwest giants were clashing at Manchester City’s Maine Road ground. Despite injury problems that saw Emlyn Hughes drafted into the Liverpool side for only his fifteenth appearance of the season, the Anfield men were still widely predicted to have too much in the locker for Dave Sexton’s men, and so it seemed when Kenny Dalglish gave Liverpool the lead after only 17 minutes. The lead didn’t last long, though, and just two minutes later Joe Jordon equalised.

When Terry McDermott missed a penalty before half-time and Brian Greenhoff scored early in the second half to put United ahead, it looked as if a minor shock was on the cards. Intense Liverpool pressure was to no avail until Alan Hansen made a rare sortie upfield with just seven minutes left and hooked in an equaliser to bring the sides back to Merseyside and a Goodison Park replay the following midweek.

While Liverpool and Manchester United were battling themselves to a stalemate, Arsenal were making relatively short work of Wolves at Villa Park, where goals from Frank Stapleton and Alan Sunderland dispatched the midlands club with the minimum of fuss.

Back to Liverpool and Manchester United and the following Wednesday with Alan Kennedy still injured, Hughes kept his place for the replay in what would prove to be his last game in a Liverpool shirt. Another blood and thunder affair ensued without quite the excitement of the first game and with twelve minutes remaining and the scoreline still blank, Hughes was caught out of the position too far up the field on the left and a break from United saw Jimmy Greenhoff nod home the only goal of the game. Bob Paisley lay the blame for the defeat clearly at the feet of Hughes and it was a sad way for his sterling decade at Liverpool to peter out.

So, that brings us full circle and back to where we came in – with Manchester United and Arsenal clashing at Wembley on May 12, 1979.

Joining Arsenal in the honours list that 1978-79 season were, ultimately, Liverpool as First Division champions, and Nottingham Forest as League Cup and European Cup winners. Further down the pyramid, Crystal Palace won the Second Division ahead of also promoted Brighton and Hove Albion and Stoke City, with Queens Park Rangers, Birmingham City and Chelsea all heading in the opposite direction.