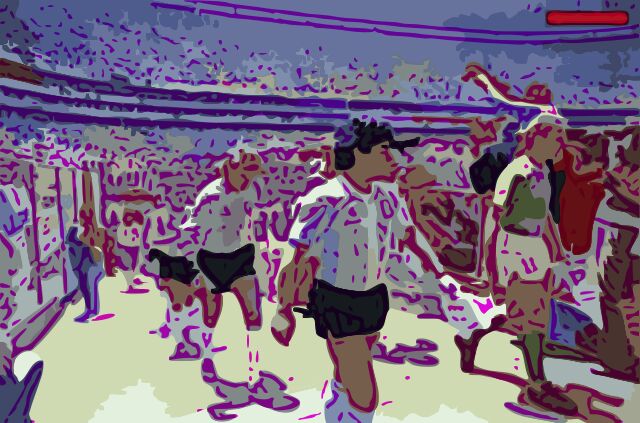 The 13th World Cup was originally set to be held in Colombia. They were chosen as hosts as far back as 1974. But as late as 1982 they had to concede they couldn’t afford it. In their defence when they made their bid for the tournament, it was expected to be a 16-nation format. But for 1982 FIFA increased the number of teams taking part to 24. There was talk FIFA would allow a reduction back to 16 if Colombia asked for it.

The 1982 Final ended with attention moving to Colombia in four years time, but within months they had to concede they couldn’t afford to host the tournament based on FIFA requirements. So they withdrew.

FIFA then held an election amongst four candidate countries, Canada, Brazil, USA and Mexico. Brazil soon withdrew their bid and USA decided to concentrate on a bid for the 1994 tournament. Eventually, Mexico was unanimously elected. This despite the fact they’d hosted the 1970 tournament.

They did not have long to put their plans in place and preparations were hampered by a severe earthquake just eight months before it was to kick off. The stadiums weren’t affected so they pressed on regardless.

FIFA had problems with the 24-nation format in 1982. After a first phase of six groups of four, there was a rather clumsy second phase format. The 12 teams were split into four groups of three. This presented a huge advantage to any side winning the first match.

This time around FIFA reverted to the more popular knockout format for the second phase. To get the number up to 16 for this, they had to find an extra four teams other than the top two in each group. They introduced qualification for the best four third-place teams from the six first phase groups. Of course, this moved the problem into the first phase rather than the second, giving sides which won their opening game quite an advantage. Although, this didn’t happen in every case with some teams winning their opening game and still not going through.

In my opinion, the 1986 World Cup is the one which had the greatest collection of world-class players in one tournament. It seemed like nearly every team had a star.

They were all there. You could argue Netherlands’ absence meant neither Ruud Gullit, Marco van Basten or Frank Rijkaard were there. But in 1986 they weren’t quite the world names they soon became two years later.

Brazil – Only retained seven players from the 1982 side, largely renowned as the best side never to win a World Cup. But of that seven, four of them were some of the best around. Socrates, Zico, Falcao and Junior. However, they were all the wrong side of 30 by then. In more familiar surroundings could they go further this time round?

Argentina – They were captained by the world’s greatest player at the time, Diego Maradona. He, and Argentina, had, had a tournament to forget four years earlier. They arrived in Spain as World Champions. Were humbled by Belgium in their opening match. Then Maradona suffered the ignominy of being sent off in defeat against Brazil. Just before the tournament, he signed for Barcelona for a world-record fee. It wasn’t just during the World Cup his time in Spain was disappointing. He struggled to make his mark at the Nou Camp, with constant disagreements with club officials. Two years later he moved to Napoli in Serie A. By the 1986 tournament he was a much more settled individual as he set about embarking on an attempt to prove his world status.

West Germany – The Germans were still captained by Karl-Heinz Rummenigge, who like many of the game’s stars, was playing his football in Serie A. He was still a major influence in the German team.

France – Michel Platini was the major influence in the French team as Maradona and Rummenigge were for theirs. They were a penalty kick away from reaching the Final in 1982 and went onto win Euro ’84 where Platini was outstanding, scoring nine goals in five matches. Platini was the undisputed talisman of the team, but they still called on the midfield quartet of Jean Tigana, Alain Giresse, Bernard Genghini and Luis Fernandez.

Poland – Zbigniew Boniek was still captain and main man within the Polish side. He’d been largely ineffective during the first phase in Spain, then turned it on with a hat-trick against the Soviet Union to see them through to the Semis. He’d spent three years at Juventus and had moved to Roma in 1985.

Mexico – Hugo Sanchez was a huge star at the time. He’d been playing club football in Spain from 1981 when he moved to Atletico Madrid. He moved to Real Madrid in 1985 and by the time of this tournament he’d been instrumental in their second of five successive La Liga titles.

Spain – By Mexico ’86, Emilio Butragueno had only played 11 times for his country, but his form for Real Madrid was earning him a reputation as one of the best forwards anywhere in the world.

England – They came into the tournament having gone out of the ’82 one unbeaten. With a new manager, Bobby Robson, they failed to qualify for Euro ’84. Just seven players survived from Spain, and one of them, Glenn Hoddle was expected to light up the place. The Tottenham playmaker was 28, the ideal age for showcasing his skill on the world stage.

Uruguay – Enzo Francescoli was the man the two-time World Champions relied on. Nicknamed ‘The Prince’ he was playing his football at River Plate. A talented, graceful player who was known for his dribbling skills. He’d been influential in helping his country to the Copa America in ’83.

Soviet Union – They were still captained by former European Footballer of the Year Oleg Blokhin. Aged 33 he’d spent 17 years at Dinamo Kyiv in a stellar career helping them to win the European Cup-Winners’ Cup twice. He’d just picked up his seventh Soviet League winners medal too.

Denmark – The golden generation was led by Michael Laudrup, one of the most exciting young talents in Europe. He turned down European Champions, Liverpool for a move to Juventus. He was only 21 going into this tournament and good things were expected of him. Preben Elkjaer was 28 and playing in the Bundesliga with Bayern Munich.

Italy – This was a much-changed squad from the one which was triumphant in Spain. They still boasted Paolo Rossi, golden boot winner four years before, and Gaetano Scirea.

Belgium – Enzo Scifo entered this World Cup under the label ‘promising youngster’. Nicknamed ‘Little Pele’ his reputation preceded him as he helped Anderlecht to the UEFA Cup Final in 1984. He was a revelation in Euro ’84 and came into this tournament at the age of 21 with the hopes of a nation on his back.

Northern Ireland – They’d qualified for their second successive World Cup, a remarkable achievement for a country their size. Manager Billy Bingham still called on legendary keeper, Pat Jennings. He was 40 by this time and had actually ended his club career at Arsenal. He’d been playing some reserve team football at Spurs and was goalkeeping cover for Everton in the recent FA Cup Final.

Looking back at these players, you get the impression this tournament may have been better had it come two years earlier. Many of the names were probably just past their best. But they were still iconic names and their mere presence made the tournament impossible to ignore.

After the farce of the Spain ’82 draw, it was unsurprising neither main UK broadcaster chose to show the draw live. It was held on 15 December 1985. ITV had a highlights package. BBC1 included news of the draw during their “Sports Review of 1985”.

Three nations, Canada, Denmark and Iraq, qualified for the first time. For South Korea, this was their first appearance since 1954, and for Paraguay since 1958. Portugal had not appeared since 1966, the days of Eusebio. Two times winners Uruguay had not been since at a World Cup since 1974.

Six teams were seeded for the draw. The four Semi-Finalists from 1982, Italy, West Germany, Poland and France. The other two were the hosts, Mexico, and three times winners, Brazil.

The six groups were drawn as follows

Group E was immediately flagged as the ‘group of death’. Any of the four countries could reasonably expect to progress. England was drawn in a tough group too, but Morocco were not fancied at all and with third place being a possible qualification spot, any win against the other two could be enough.

The tie of the group stage was clearly going to be in Group A when Italy took on Argentina. The past two winners of the tournament up against each other. Argentina were captained by Diego Maradona who was playing his club football in Italy. It was a mouth-watering prospect.

Later, we will highlight five of the best qualifying matches and then from Tuesday it all kicks off with each day summarised.

You have to chance to relive one of the most iconic World Cups day-by-day as if it was happening again.