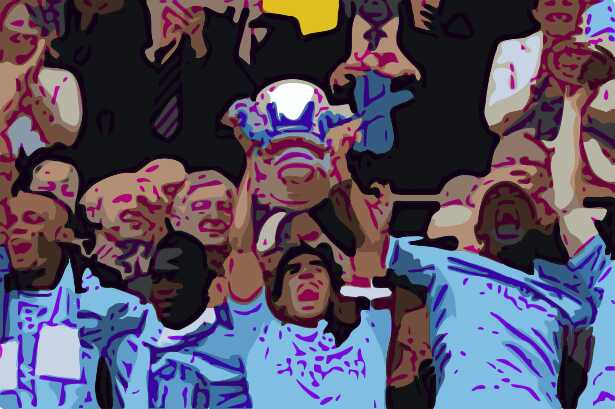 Over the last decade, Manchester City has dominated English football as their trophy cabinet started to fill up with Premier League titles and domestic cup competition trophies.

Although their methods of splashing the cash have earned them fierce criticism from all areas of football, it has nonetheless made them one of the most successful sides in the top division, as players such as Kevin De Bruyne, Vincent Kompany, Sergio Aguero, David Silva etc. came into the side and lit up the Premier League.

However, every footballing dynasty has to start somewhere, and three years after Sheikh Mansour took over the club in 2008, the Citizens would win their first of what was to become a plethora of trophies, when they beat Stoke City in the 2011 FA Cup.

Here is their FA Cup journey that season and how City began their decade of dominance.

Through the Rounds and Replays

Their first match was a third-round tie against Nigel Pearson’s Leicester City team at the King Power Stadium. The Citizens dedicated the match to their former striker Neil Young, following a campaign by the supporters. Young scored the winning goal when Manchester City and Leicester City met in the 1969 FA Cup Final.

Pearson’s side made the perfect start just 46 seconds into the game when defender Sol Bamba headed in from a corner to make it 1-0 to Leicester. Not the start Roberton Mancini and his players wanted.

But before halftime, his side managed to turn things around when James Milner and Carlos Tévez scored to make it 2-1. Given their quality, you’d expect City to go on and win, but midfielder Andy King had other ideas as he got the Foxe’s equaliser midway through the second half to make the score 2–2.

Man City couldn’t find another goal and the match ended 2-2, sending the tie into a replay in the following week. Tévez gave the home side a 1-0 lead after 15 minutes played, but Leicester didn’t lie down as four minutes later, Paul Gallagher’s penalty levelled the score, after Patrick Vieira had fouled Lloyd Dyer.

However, just before halftime, City scored two goals in 90 seconds which shifted the momentum towards the home side. They could’ve killed them off in the second half when Tevez had the chance to make it 3-1 from the penalty spot, but the Argentinian missed his spot kick and was made to pay when Dyer made the score 3–2.

The Foxes pushed for an equaliser, but Aleksandar Kolarov scored on a counter-attack to make the final score 4–2.

In the fourth round, they were drawn against League One outfit Notts County at Meadow Lane. The pitch was described as “pudding-like” by the BBC, and the home side looked to use it to their advantage.

Mancini’s players struggled to play their regular game on a bad pitch, and just before the hour mark, the Magpies took the lead when midfielder Neal Bishop scored from a corner, sending the home fans into raptures.

However, just a few minutes from time, it would be heartbreak for the home side as Micah Richards crossed for Edin Džeko to score his first Manchester City goal, ensuring a replay at the City of Manchester Stadium.

In the replay, Notts County started the rematch brightly, but they slowly began to fade as the game ticked on. It remained 0-0 for most of the half until Vieira then scored on either side of half-time to give Manchester City a two-goal lead. From then on, City took control as the Citizens added another three goals to secure a 5-0 win and progression into the fifth round.

Aston Villa would be their opponents at the City of Manchester Stadium, and the Villans manager Gérard Houllier rested several senior players, in contrast to a near full-strength Manchester City line-up. The Citizens comfortably won 3-0 thanks to goals from Yaya Touré, Mario Balotelli, and Silva.

Round 6 of the FA Cup was against Reading, the only team outside of the Premier League left in the competition. it was a much closer affair than Mancini would’ve wanted as Richards scored in the 73rd minute to claim a 1-0 win and progress themselves to the FA Cup Semi-Final.

In the Semi-Final, it would be a Manchester derby and City and United faced off at Wembley. Predictably, United dominated the early stages, and Dimitar Berbatov, in for the suspended Wayne Rooney, missed two golden chances in the space of a few seconds.

Sir Alex’s men would rue those missed opportunities as seven minutes into the second half, Micheal Carrick was brushed aside by Touré after conceding possession and the midfielder raced past Nemanja Vidić before slotting a composed finish past Edwin Van der Sar.

It got worse for United when Paul Scholes was sent off late on for a wild challenge on Pablo Zabaleta. This allowed City to establish themselves in the game and ultimately see out a 1-0 victory, getting one up over their rivals and sending them through to their first FA Cup final since 1981. Stoke City would await them at Wembley.

Final vs Stoke City – A first of many triumphs

The Citizens were, without doubt, the favourites given their squad of players, but Mancini saw in-form Stoke’s underdog tag as a risk for complacency from his side.

The Italian manager set up his set-up in a 4–2–3–1 formation, with Balotelli, Silva and Touré playing behind lone striker Tevez, and Nigel de Jong and Gareth Barry in defensive midfield roles. Whereas Stoke City head coach Tony Pulis played with a rigid 4–4–2 formation, with two wingers in Jermaine Pennant and Matthew Etherington to support strikers Kenwyne Jones and Jonathan Walters.

Unsurprisingly, City started the match brightly and managed to create some decent chances which forced saves from goalkeeper Thomas Sørensen and steady defending to keep the Potters in the game during the first half.

Touré then unleashed a 30-yard strike in the 11th minute which went only inches wide of the top corner of the goal, meanwhile, just before the 25th-minute mark, Balotelli had a curling shot from the corner of the penalty area which looked destined to rattle the net but for a strong, one-handed save from Sørensen to deny him.

After the first half of domination, the scoreline remained 0-0 in West London going into the interval. Stoke did improve in the second half, but City had a great opportunity with 56 minutes played.

A counter-attack led by Tevez, who drifted out to the right flank, allowed Silva to find space outside the Stoke City penalty area. Tevez managed to pass to Silva, but the Spaniard was guilty of over-elaboration instead of shooting first time, and the Potter’s defence managed to regroup, dispossessing the midfielder before he could adjust himself to shoot.

Having been on the back foot for most of the game, Pulis’ players had their golden moment just after the hour mark. A looping ball over the top of the Man City defence by Etherington allowed Jones a one-on-one, but he failed to convert, firing straight at goalkeeper Joe Hart with the ball ricocheting off both striker and keeper before bobbling to safety.

Etherington, who was a doubt before the game due to a hamstring injury, showed signs of fatigue and was taken off not too long after Jones’ effort.

As a result, Stoke’s attack started to fade away and City ramped up the pressure on the Potter’s defence. But Danish goalkeeper Sørensen continued to keep the Potters in the game.

However, in the 74th minute, Man City finally found a way past him when Touré pounced on a stray ball in the penalty area to shoot with his left foot past Sørensen in front of the City supporters. Stoke attempted to get a goal back, resorting to direct long balls into the penalty area, but failed to create any concrete chances.

The Rise of City’s Domination

The final whistle blew and Manchester City won the 2011 FA Cup. Despite Touré clinching the winning goal, enigmatic striker Balotelli, who claimed he had a “s***” season in a post-match interview, was named man of the match for his efforts.

It was an amazing achievement for the Citizens, but this would only be the start. A year later, they would win their first Premier League title in the most dramatic fashion when Agüero scored in the 93rd minute, snatching the crown away from their City rivals Manchester United.

As mentioned in the beginning, every dynasty needs to start somewhere, and their FA Cup glory of 2011, despite winning the league 12 months later, proved they had the capabilities to win silverware and compete with the likes of Man United, Chelsea, and Liverpool in the years to come.

More League titles and domestic trophies would arrive at the Etihad in the next decade, with only the Champions League being the only missing piece in their cabinet. But with the arrival of highly-rated striker Erling Haaland this summer, it only seems a matter of time until the Citizens complete the set with the European Cup.