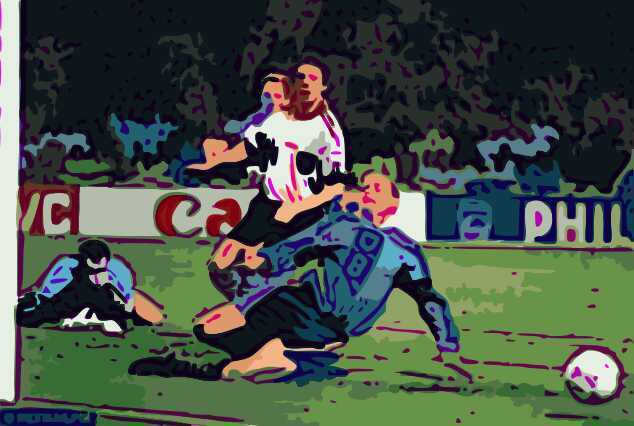 In a previous article posted a few months ago, I spoke about England’s journey through the 1990 World Cup in Italy, and how that team under Bobby Robson almost brought the prestigious trophy back to English shores.

Well, in 1996, with the European Championships taking place on home soil,and now under the management of Terry Venables, the Three Lions were the favourites to win the tournament. Still, history would repeat itself as the glory of international success slipped just beyond their grasp.

In this week’s piece, we’ll review England’s journey throughout the Euro 96 tournament and look at how close Venables and his players were to giving the England fans success after 30 years of hurt.

Since England would be hosting that year’s Euros, they didn’t have to qualify, and their group consisted of the Netherlands, Switzerland and Scotland. The Swiss were up first for Venable’s men in Wembley.

Expectations were undoubtedly high going into the first game, and the Three Lions looked to make an impressive start to the tournament. However, despite a somewhat even start to the match, England got the opening goal in the 23rd minute when Alan Shearer, who was on a 12-game goal drought on the international scene, collected Paul Ince’s cute inside pass, before unleashing a fearsome shot high into the roof of the net.

The shackles were now off, and the England players could play with more freedom. Despite this, they couldn’t seem to find another goal to double their lead.

Switzerland managed to work their way back into the game in an impressive fashion, and nearly drew level just before the interval when Marco Grassi somehow contrived to turn onto the bar after Kubilay Türkyilmaz had ghosted past Stuart Pearce and delivered a pinpoint pass from the right.

Determined not to let that miss get to them, the Swiss remained buoyant in the second half. Ciriaco Sforza and Johann Vogel were commanding linchpins in midfield, the latter going close with a rasping drive before the equaliser finally arrived; Pearce handled in the area, and Türkyilmaz calmly slotted into the bottom right-hand corner.

With the game ending 1-1, it wasn’t the ideal start that Venables wanted, but far better was to come in the remaining group stage matches.

Old arch rivals Scotland would be up next for the Three Lions. England struggled to get going in the match’s early stages as neither side could create that moment of magic to spark the game into life.

But during the halftime interval, Jaime Redknapp came on for Pearce, and his support of Paul Gascoigne in attack would change the entire complexion of the game.

Within eight minutes of the restart, the home side was in front when Gareth Southgate found Gary Neville in space on the right, and his brisk cross was directed perfectly for Shearer to head into the back of Andy Goram’s net. The striker became the first England player to score more than one goal in the UEFA European Championship.

But an experienced Scotland side refused to buckle, and David Seaman had to save a header from Gordon Durie. Then, the Scots were awarded a penalty after Tony Adams brought down the striker in the 18-yard box.

Gary McAllister began his run-up, but the ball moved on the penalty spot, and Seaman saved his firm shot with his elbow. This was the best chance they had of getting something out of the game, as later in the second half, Venables men produced a moment of magic.

“Gazza” took centre stage, collecting a Darren Anderton chip on the edge of the box; the midfielder flicked the ball over Colin Hendry with his left foot, ran around him as the defender stumbled, and volleyed past Goram with his right. It was sheer brilliance, blending technical maturity with an almost youthful abandon.

He then celebrated with the iconic “dentist chair”, mocking the heavy criticism of him and his part in England’s team-building trip to Hong Kong before the tournament. England beat Scotland 2-0, but they would have to perform better against the Netherlands if they were to top the group.

Game 3 vs the Netherlands

A big game against the Dutch to see who decide who would win the group. However, despite the quality the Dutch possessed, they failed to break the deadlock, with Clarence Seedorf, Aron Winter and Dennis Bergkamp all guilty of spurning presentable openings.

On the other hand, England found the breakthrough after Danny Blind was judged to have fouled Ince inside the penalty area, and Shearer made no mistake from 12 yards to give England a 1-0 lead.

In the second half, the Three Lions turned up the heat as they swept aside the Dutch in a ruthless display of attack. Teddy Sheringham showed great aerial prowess to sneak Gascoigne’s corner at the far post and make it 2-0.

The same two players were again involved in the third, Gascoigne bursting down the left before passing inside to Sheringham, whose delightful lay-off was met by a thunderous Shearer finish.

Sheringham made it four when he clipped in the rebound after Anderton’s deflected shot, was parried by Edwin van der Sar; with Scotland leading Switzerland 1-0 at Villa Park, the Dutch were suddenly on the brink of elimination.

Patrick Kluivert came off the bench to perform a dramatic rescue act, finding a way past Seaman with 12 minutes left to send the Orange army to the knockout stages ahead of the Scots on goal difference. However, Guus Hiddink’s team were not celebrating as they had been outplayed by an England team now brimming with momentum.

Unlike the Spain of the late 2000s, this side were more defensively resilient and would present a formidable challenge for Venables and his men.

No one had played a more pivotal role in England’s resurgent tournament than Shearer, and the Spanish were all too aware of the threat posed by the burly yet mobile striker. Unfortunately, Shearer had little room to work as the Spanish defenders kept very tight to him. However, the Geordie managed to find a rare escape into space at the fourth-minute mark, but Andoni Zubizarreta stopped his fierce shot.

The Spaniards swiftly got a foothold in the match, and had the ball in the net twice, each time being denied by the offside flag as they carved the Three Lions defence apart as halftime approached.

Javier Manjarín also had a great chance to score after being put clean through on goal, but his hesitation allowed Seaman to advance and block with his legs. England had to tighten up in the second half, with Steve McManaman and Gascoigne finally starting to work the openings that Spain denied them earlier.

“Gazza” created the best opportunity of the game when he chipped to the far post for Shearer, who somehow turned over from close range. Ninety minutes were up, and extra time was needed with the score still 0-0.

Furthermore, the new golden goal rule was introduced in the tournament and was believed to be an exciting way to win a game. However, if anything, it proved how defensive teams could get as neither side wanted to give anything away. Thus the extra period ended goalless as well, and penalties would be the ultimate decider.

England was up first, and Shearer stepped up to bury his penalty and put the Three Lions 1-0 up. Fernando Hierro was the first taker for Spain, but he rattled the crossbar with his effort, much to the delight of the English fans inside Wembley.

David Platt was next up and made no mistake from the spot, making it 2-0. However, Guillermo Amor managed to half the deficit by scoring his penalty, before Pearce scored his spot-kick and encouraged the crowd with his celebration, which was seen by many as a release of his demons from missing a penalty in the World Cup Semi-Final against Germany 6 years previously.

Alberto Belsué then buried his penalty to keep his nation in the tournament. After that, Gascoigne scored his spot-kick, meaning that if Spain missed their following penalty, they would go through to the Semi-Final.

The responsibility fell to Miguel Nadal to keep his side in the competition, but Seaman superbly saved his effort from 12-yards, and England would go through to face off against their old foe Germany.

Just like in Italia 90, Germany would again be England’s opponent in the Semi-Finals of an international tournament. But, this time around, Venables was hoping to do what Robson could not and get past the Germans and advance into England’s first major final since 1966.

The Three Lions made a blistering start when Andreas Köpke athletically turned over Ince’s rasping volley. But the German shot-stopper would be beaten 30 seconds later after Adams flicked on Gascoigne’s corner for Shearer to swoop and register his fifth tournament goal.

However, Germany got their equaliser after 16 minutes played; Andreas Möller fed Thomas Helmer, who swivelled inside the area and crossed for Stefan Kuntz to force a shot past Seaman.

Despite being pegged back, England continued to attack. Sheringham was denied on the goal line after a trademark near-post dart to meet a corner, and Shearer headed his shot wide from an Anderton cross.

Both sides attempted to tighten up in the second half; Helmer put his chance over the bar in the best opportunity to win the game, before extra-time and the golden goal rule would be in play.

This did bring both teams out of their shells, with England in particular showing endeavour, having suffered such heartache at the hands of the penalties in the past. Anderton struck his effort onto the post before Gascoigne came agonisingly close to poking home Shearer’s cross.

The score stayed 1-1 as extra-time ended, and penalties would again decide the fate of England vs Germany.

Venables men were up first, and Shearer made no mistake as he buried his penalty to give England a 1-0 lead. Thomas Häßler then scored to make it 1-1. Platt made it 2-1, but Germany again pegged back through Thomas Strunz to make it 2-2.

Pearce then made it 3-2 after burying his effort from 12-yards before Stefan Reuter drew the shootout level at 3-3 with his penalty. Gascoigne was next up and scored his spot-kick, but once again, Germany found a reply as Christian Ziege scored his penalty to make it 4-4 in the shootout.

Neither side blinked as Sheringham and Kuntz put their penalties away to even the scores at 5-5, taking the penalty shootout to sudden death.

The responsibility fell to Southgate, but the German goalkeeper Köpke saved the defender’s relatively poor penalty, and now Germany was on the brink of the Euro 96 final. Möller stepped up and scored the deciding spot-kick to send Germany to the final and break England’s hearts again.

It was a devastating end to what could’ve been a sensational home tournament for the Three Lions.

In 2021, 25 years after the events of Euro 96 and with Southgate now the England manager, penalties would again be their undoing, as they lost the Euro 2020 final 3-2 on spot-kicks to Italy. In both finals, England made the perfect start, but like back then, it wasn’t enough.

Now with England preparing for another shot at glory at the World Cup in Qatar later this year, we will all watch intently to see if this is the year that football finally ‘comes home’.