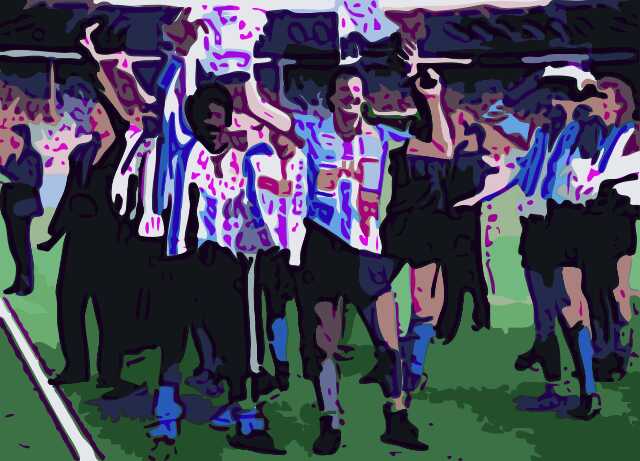 Last week, I spoke about how Manchester City’s FA Cup victory in 2011 was the beginning of their dominance in English football, the start of a dynasty, as it were.

Although the world’s oldest cup competition may not be the pinnacle of most of the top six clubs as it once was, with the focus primarily being on the Premier League and European tournaments, it is still a historically significant trophy to achieve.

But back in the 1980s, when the FA Cup was more prestigious than today, clubs would fight tooth and nail to win the competition and bring glory to their fans. Coventry City was one such team when they won the 1987 final against Tottenham Hotspur.

This piece will detail how the Skyblues managed to defeat a Spurs side that featured the likes of Glenn Hoddle, Chris Waddle and “Ossie” Osvaldo Ardlies, amongst others, to win their first significant honour in the club’s history.

The build-up: Music and Tactics

In the build-up, both clubs had recorded songs to commemorate reaching the FA Cup final. Spurs brought London Musicians Chas and Dave to record the song “Hot Shot Tottenham”, reaching number 18 on the UK singles chart. In comparison, Coventry released the single “Go For it,” which reached number 61.

Tottenham was, without doubt, the favourites, having never lost their previous seven finals, and many of their playing squad had experience in Wembley and international matches. In stark contrast, Coventry had only one international in David Phillips, and only four of their players had appeared at the national stadium.

Both sides had deployed 4-4-2 formation. Coventry manager John Sillett had to play without regular full-back Brian Borrows after his injury in the season’s final league game. He would be replaced by Micky Gynn in the starting Xl, with Phillips moving from the midfield to the defence to replace Borrows.

Spurs, meanwhile, fielded a full-strength squad, with Chris Hughton playing at right back in place of Gary Stevens. The Irishman had missed all but ten of the team’s games since November due to an injury but was fit for the final. Stevens’s potential versatility partly influenced manager David Pleat’s decision to leave him on the substitutes bench. This season was also the first in which teams were allowed to select two substitutes for an FA Cup match.

The Final: Never Giving Up

Tottenham kicked off the final with 96,000 fans inside Wembley on a sweltering day. Within two minutes, Pleat’s men went 1-0 up. Waddle played in a cross from the right wing, and Clive Allen beat defender Trevor Peake to the ball to head it past Coventry keeper Steve Ogrizovic for his 49th goal of the season.

Not the start that the Skyblues wanted, but they immediately went about finding an equaliser. Five minutes later, Mitchell Thomas fouled Gynn deep in the Tottenham half: the resulting free kick was eventually cleared to Gynn, who passed to Cyrille Regis, whose cross was cleared, and the ball fell to Phillips, whose snap-shot was deflected away.

Sillett’s men continued to pressure the Spurs defence, and in the 9th minute, they got their goal after a deep cross from Greg Downs was headed on by Keith Houchen to Dave Bennett, who rounded goalkeeper Ray Clemence and struck the ball past Steve Hodge into the corner of the Tottenham goal.

Coventry nearly made it 2-1 just two minutes later when Two minutes later, a high cross from Houchen was dropped by Clemence but cleared by Hughton. Midway through the first half, Skyblues won a throw-in deep in Tottenham territory. Houchen flicked on the long throw from Phillips before Regis headed it into the goal past a diving Clemence, only for it to be disallowed due to a foul on Thomas.

At the half-hour mark, a backpass from Trevor Peake was chased down by Clive Allen, forcing Orgizovic to run from his area and make a hurried clearance which Hoddle intercepted. However, the Tottenham midfielder’s shot was blocked by Peake, whose pass to Ogrizovic was misplaced, allowing Allen another chance, this time striking the side-netting.

Five minutes later, a quick break from Coventry saw Regis run at the Tottenham defence before passing the ball to Gynn. His shot was low and hard to Clemence’s right-hand side, but the Tottenham goalkeeper saved before Gary Mabbutt cleared it out.

Late into the first half, however, Pleat’s men would regain the lead when Nick Pickering fouled Paul Allen on the right-hand touchline, midway into the Coventry half. Hoddle’s free-kick into the penalty area flew over three defenders and fell to Mabbutt, whose left-footed strike bounced into the Coventry goal to make it 2–1 to Tottenham after 41 minutes.

The halftime whistle blew, and despite being a goal down, the Skyblues were not going to fade away. Neither side made any changes as Coventry kicked off the second half.

Second half: Keeping up the Pressure

After 54 minutes gone, a poor defensive clearance from Peake was collected by Hughton, who played the ball to Hoddle: his mazy run towards the Coventry penalty area ended with a cross which was narrowly missed by Clive Allen but caught by Ogrizovic.

Not long afterwards, a long ball upfield from Brian Kilcline found Gynn amongst four Tottenham defenders: he strode towards the penalty area, but Gough cut out his attempted pass.

However, at the 63rd-minute mark, Sillet’s team could not be denied again. Regis headed on a long goal-kick from Ogrizovic to Houchen. He controlled the ball before passing out to Bennett on the right wing while continuing his run into the Spurs penalty area. Bennett kept possession before producing a right-footed cross which Houchen struck past Clemence with a diving header into the bottom-left corner of the goal to make it 2–2.

Their determination and willingness to keep going were remarkable, and with momentum on their side, Coventry looked for a winner. In the 70th minute, a quick throw-in from Bennett found Phillips, whose cross into the box was headed goalward by Houchen but was saved by Clemence to his left.

Spurs still had their moments, though, as, with just over 10 minutes left, Hoddle played the ball from deep in the Coventry half on the right wing into the penalty area to Hodge. Clive Allen turned his defender to make a low cross struck high and wide. Waddle then received the ball from a throw-in just into the Coventry half: he advanced and hit a left-footed shot from around 30 yards past the post.

In the 88th minute, Pleat’s side had the final big chance of the game when Hughton crossed from the right into the Coventry box, where Clive Allen controlled it before shooting on the turn from close range: Ogrizovic saved it with his foot.

Just a minute later, Coventry made the first substitution of the match, with Graham Rodger coming on to replace Kilcline, who had sustained an injury in an earlier mistimed tackle on Mabbutt. But neither side could muster up a final last-minute goal, and the game would go to extra time.

During the interval, Spurs made their first change when Stevens replaced Ardiles, with Pleat’s men kicking off the first half of extra time. Within the first five minutes, Hodge received the ball in his own half and ran towards the Coventry goal, beating three defenders before Downs blocked his shot on the edge of the penalty area.

A moment later, however, Sillett’s men would complete the turnaround after Rodger picked up a loose ball from Tottenham and advanced over the halfway line before sending a left-footed pass out to McGrath in space on the right wing. Lloyd McGrath then ran into the Spurs penalty area and crossed the ball, which Mabbutt deflected upwards off his left knee and over Clemence to score an own goal, making it 3–2 to Coventry.

Pleat made his second and final substitution during the Coventry celebrations, with Nico Claesen coming on to replace Hughton. But the momentum was firmly with the Skyblues as they broke quickly from their own half, as Bennett found Gynn. He dribbled to the edge of the Tottenham box before being fouled by Richard Gough; the resulting free kick was struck straight into Hoddle in the defensive wall.

Sillett’s players could’ve made it 4-2 before the break when Bennett played the ball into the penalty area to the feet of Houchen, whose low first-time shot was saved by Clemence down to his right. The referee brought the first period of extra time to a close, with the score 3–2 to Coventry.

The Skyblues kicked off the second half of extra time with no changes during the interval. In the 109th minute, Gynn made a penetrating run towards the edge of the Spurs area, laying the ball off to Pickering, whose placed shot went wide and high of the goal.

The Tottenham players began to fade with their quality as Coventry had most of the chances through the second period of extra time. With three minutes remaining, a wayward pass from Mabbutt was intercepted by Bennett, who quickly passed to Gynn. He ran into the area, rode the challenge of Stevens and took the ball wide before shooting, but Clemence caught the strike.

Coventry began to run the clock down as they tried to keep possession. Spurs’ last chance came from Hoddle’s long ranged volley, which Ogrizovic easily gathered. It proved to be the last chance of the game as the referee blew the final whistle, and Coventry City were crowned FA Cup champions.

It was a fantastic achievement for Sillett and his players as they overcame the odds against a brilliant Tottenham side and won their first major trophy in the club’s history. But, unfortunately, because of the ban on English clubs in European competitions due to the Heysel disaster of 1985, they would not be able to compete in next season’s UEFA Cup.

However, that doesn’t take away the efforts and resistance the Skyblues players displayed throughout their FA Cup journey that season. It is one of the reasons why the competition is still held in such high regard to this day, despite what some people might say.