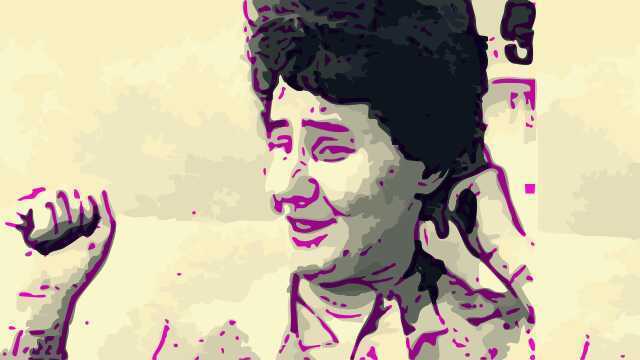 BBC has just celebrated the anniversary of ‘Sports Report’, a weekly news programme broadcast on the radio at 5 pm every Saturday for the past 75 years.

These days we’re used to hearing female voices among the commentary, reporting and punditry. But there was a time when this area of journalism was considered a bastion reserved solely for males. Just over 50 years ago, the first female voice was heard on the programme, and the lady in question’s story demonstrates how much she had to battle just to be heard.

The very fact a female was heard at all became the news story in itself.

Mary Raine grew up in the north east of England. Coming from such a football hotbed, she was expected to support Newcastle United, just as her brother did. But he made it very clear she was not to copy him so she chose Sunderland instead.

At the time women weren’t allowed to play football after The FA imposed a ban in 1921. Football had always been considered ‘a man’s game’ and generally women were shunned from getting too involved.

But Mary was a keen footballer and had to content herself with kickabouts with her brother and his friends. In an interview with Philip Barker in 2019 she recalled;

“they would do target practice and I was stuck in goal. I was a very good hockey goalkeeper as a result of all that.”

Like many boys of her age, she had a collection of football annuals and magazines, but unlike the boys, this was considered ‘unsuitable’ for a girl and she had to hide them to avoid confiscation.

After going to Oxford University she moved into teaching but soon found it boring. So she applied to join the BBC, initially in the politics department as a sub-editor. Football was always a sideline for her and soon colleagues discovered her passion for football. During a chance conversation with legendary commentator, Peter Jones, the opportunity came up for her to report on a match.

At the time they were at Roker Park, the former home of Sunderland. Jones encouraged her, as did Bryon Butler, another part of the furniture within BBC sports broadcasting.

“I was at Roker Park one Saturday and knowing Peter was there I went to see him. It was some time before they’d let me up to the Press box. But when I finally arrived he said it would be a good idea for me to do a broadcast”

Her colleagues often referred to her as a ‘walking who’s-who of football’ and Jones and Butler were particularly taken with her enthusiasm.

“I was always discussing football with Bryon. He was very helpful and had a wonderful West Country burr.”

Jones then reiterated his view a few days later;

The opportunity had arisen at the end of February 1969. She was sent to Stamford Bridge to report on Chelsea against her beloved Sunderland.

Sunderland got thumped. Recalling in 2019 she said;

“It was a total disaster. Sunderland were hammered but, of course, I couldn’t show any partiality”

After the match, she posted her report. No one who listened will have believed she came from the north-east, so southern was her accent. 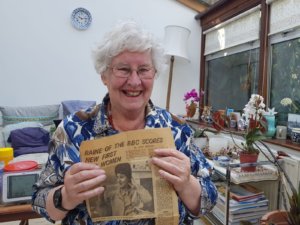 “Well, there were two teams on the field, but only one in the game. For it was Chelsea all the way.

But for much of the match, after Birchenall had put them ahead in the 14th minute, it looked as if they might be happy to settle for a one-nil result. Then, midway through the second half, Chelsea, or to be more precise, Tambling, struck with four goals. All in the short space of 18 minutes.

The first and third showed his strength on the ball. The second was a simple affair, after Montgomery had failed to hold a shot from Houseman. The fourth reminded us he can also head a ball.

Sunderland were so poor in opposition that Chelsea were completely in command in all departments.

Osgood was in good form in midfield, splitting the Sunderland defence with accurate passes to his forwards. And Cooke? Well, he was just himself. What a charmer.

And I almost forgot, Sunderland did get a goal. Suggett squeezed one in somewhere among Tambling’s fourth. But for most of the time Sunderland were second best. They looked beaten long before the end. In fact, they were better in only one department. Playing the offside game.

And if that sounds like feint praise, well that’s all they deserve” 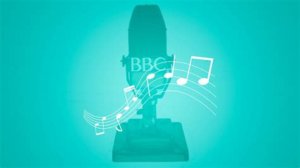 Chelsea won 5-1. This was that great Chelsea side of the late ’60s-early ’70s. Players such as Tambling, Osgood, Hollins, Harris, Webb, Bonetti and Cooke. They were a week away from an FA Cup Quarter-Final clash with West Brom. Beaten 0-5 at Southampton just a few weeks before so this was a welcome turnaround in form. It made no difference as The Baggies won.

Sunderland were 17th in the table containing 22 teams at the time. A year later they were relegated. Of course, just three years after that they too beat Leeds United in the FA Cup Final in one of the competition’s biggest shocks.

The fallout from Mary’s report was mixed. The producer, Angus Mackay’s assistant recalled at the time;

“The reaction has been extremely favourable. Anyone who heard her broadcast will have noted her knowledge of the game. We always judge broadcasters on their merits and there is no reason why Mary and any other women should not cover matches in the future.”

Some of the newspapers were less than favourable.

The Observer was particularly condescending, beginning with;

“The feminine invasion of our sporting life continues”

Before soiling itself further with;

“I do hope one of her colleagues will put her right that all Sunderland need to do is give the ball to someone who can give it a mighty wallop from 30 yards. It is in the penalty area it counts my dear”

Goal magazine featured a piece on her inviting readers to “Meet the BBC soccer shocker”, explaining how, in its opinion;

“BBC risked the wrath of their listeners by sending a woman into another male bastion, the football ground press box.”

In the Goal piece she gave her opinion on women and football at the time;

“In view of the fact she ‘swears like a trouper’ she is not bothered by some of the more choice language used by male supporters.

Neither does she subscribe to the view that women should be specially catered for at football grounds.

‘I just go to see the game’, she said, ‘I don’t see that anything could or should be done for women supporters – if they don’t like it, they should stay at home’.” 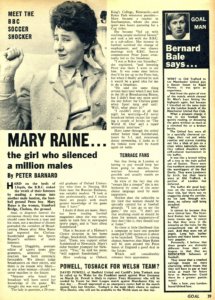 Mary would soon receive another invitation to cover a Chelsea game. The 1970 FA Cup Final was going to be between Chelsea and Leeds United, two of the most charismatic clubs of the time.

“It was simply a big wheeze by the Newsroom Editor of the day, possibly Peter Woon whom I got on well with, for the main bulletin that day.”

“They thought it would create a bit of a sensation, which judging by the front page of the Sunday Times the following day, it did. Imagine! There I was splashed right across the headlines.”

The Home Service used her report, but another senior editor told her he could not use a football report by a woman on such an important match.

Here is her report of the match

A magnificent match nonetheless, fast, clean and skilful. Leeds had thrown off their recent exhaustion and were back to top form. For most of the game they were on top with Bremner and Giles dominating midfield play, splitting Chelsea’s defence with a stream of accurate passes to Gray and Lorimer. But all tribute to Chelsea. Twice they were behind, and twice fought back bravely to draw level. As for the goals, the first two were rather muddled affairs. It appeared as much the fault of the pitch as the players. Jack Charlton got his head to a Gray corner, and two Chelsea defenders misjudged its bounce and in rolled the ball.

Then just before half-time Houseman picked up what seemed a harmless pass and let fly. Sprake misjudged his shot and the ball rolled over his arms to creep in by the far post. Then just six minutes before the end of full time Leeds got a goal. Here’s how Maurice Eddleston saw it.”

Cue the commentary for the goal, before Mary interjected

“And we thought then it was all over, but it was not to be. Chelsea scored again.

Cue more commentary, before she concluded

“Poor Leeds, they must feel like the playthings of fate, doomed not to battles, but to long wars of attrition. It’s Celtic again on Wednesday, and for the repeat performance of today we have to wait till the 29th at Old Trafford”.

Far from being undeterred by some of the responses she’d received, she continued to write about football, but her words did not appear under her own name.

“Many sections would not have used a football report if it had been under a woman’s name. My favourite aliases, used when they were on leave, were John Wilson and Alan Jones.

These sounded good for a sports report. Women and football didn’t go together. I am glad to say that things are very different now.”

She found that her male colleagues would often come to her if there were some big stories, especially hooliganism. She wrote about Heysel and other football-related issues where perhaps they felt she had more compassion.

Obviously, barriers have come down now with women often anchoring football programmes and the likes of Jacqui Oatley, Vicki Sparks, Robyn Cowen and Pien Meulensteen getting regular gigs on commentary during the Qatar World Cup.

Raine had a long career at the BBC. She doesn’t see herself as a trailblazer or pioneer. She credits people such as Eleanor Oldroyd, who became Sports Report’s first female presenter, Oatley, the first female commentator on Match of the Day, and Eniola Aluko, the first woman pundit, as being those who truly broke down barriers.

Retaining her humility she still cannot bear to listen to her voice from Sports Report.