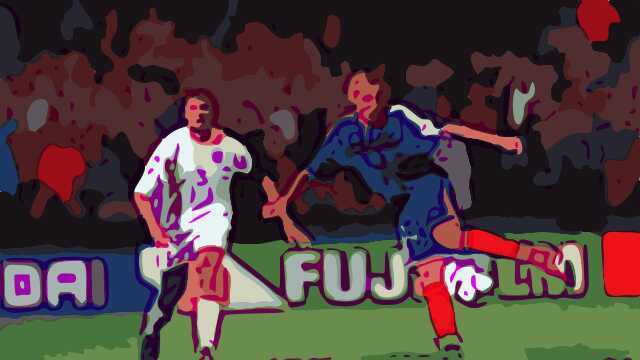 The last time a golden goal was scored in a major knockout round was against the backdrop of South Korean hysteria and Italian trauma. At odds with his adopted home, Ahn Jung-Hwan rose above Paolo Maldini to flick the ball into the back of the net and send the Azzuri home before the controversial 2002 World Cup quarter-final stage.

Whatever Guus Hiddink meant when he told the striker that his life would change in the buildup to the tournament, a proverbial inclusion to Italy’s black-list probably wasn’t what was intended. A book could be written about the deviltry that unfurled that ruinous day, with referee Byron Moreno still renowned as one of football’s anathematised villains. Sadly, though, it was the unpresuming goalscorer that came out worst.

Jung-Hwan was on loan for Seria A club Perugia at the time of the World Cup, and his goal provoked a pathetic reaction from his employe. In perhaps the greatest ever example of a chairman throwing their toys out the pram, an embittered Luciano Gaucci terminated his contract, claiming: “That gentleman will never set foot in Perugia again. I have no intention of paying a salary to someone who ruined Calcio.”

It’s been nearly 21 years since the South Korean was expunged from Italy and the Golden Goal was buried. But that doesn’t stop my old man from wishfully asking whether the game will go to golden goal as each of Liverpool’s tournament games enter the dying embers. If truth be told, I was two when the last of its kind happened, but I’d be lying if I said the possibility of its return didn’t excite me.

Through the bloodless mist that swaddled the hope of attack-minded melodrama was the decision to bring about the golden goal rule in 1993. It might have been a flawed change during the monolithic commercial era of football. Still, it also promised moments that trembled the sport, and it’s debatable whether a return to the tiring extra time and fluke penalty shootout system is any better.

The dark arts of Italia 90

Italia 90 was remembered for many reasons. From John Barnes’ World in Motion rap to West Germany’s eventual success, it was also the last tournament before the sport became commercially driven, bringing about changes all across the board.

Like the backpass rule, the golden goal was introduced to apprehend negative and risk-averse tactics that curbed the flow of games. It was largely because of the dark arts of the 1990 World Cup that the idea was given high ground. Never was the tactical conservatism more pronounced than in the extra-time periods where four nervy knockout stage duels, including both semi-finals, required the lottery of a penalty shootout to decide proceedings.

Teams went into extra-time with the end goal of making it to penalties, where luck outweighed ability. Both FIFA and IFAB saw it as a problem. To stem the tide of monochromatic football, the formatting of knockout football needed to be reformed, and so the school ground rules of ‘next goal wins’ became idealised into officialdom.

Going by the far-less marketable name of ‘sudden death’ initially, the golden goal rule would first replace the traditional thirty minutes of extra time in 1993 when Australian midfielder Anthony Carbone scored the world’s first official ‘next goal wins’ in the Youth World Cup.

As Brazil went on to win the competition, FIFA continued to trial the new rule as Italia 90 had commenced the change of football as we knew it forever. Though it took another couple of years before the modification was integrated into the more glamourous competitions – by 1995, it sent shockwaves through the globe, overseeing the highs and lows of football in its most unadulterated condition.

The winner – for definite!

The new rule’s first sally on British soil was in the Auto Windscreens Shield final – one of the many ridiculous sponsorship names for the Football League Trophy – at Wembley. With the clock striking the 103rd minute, enter Birmingham midfielder Paul Tait; his header flew into the Carlisle net and spurred commentator Alan Parry to excitedly declare: “For the first time in Wembley history, we can say with absolute certainty that that’s the winner!”

A little over a year later, another golden goal was scored, with Oliver Bierhoff the protagonist in the 1996 European Championships final between West Germany and the Czech Republic. The unannounced striker ensured the world knew who he was when he came off the bench whilst Die Mannschaft trailed 1-0, going on to score in normal time to level the score before Czech keeper Petr Kouba mishandled a pop shot to crown the West Germans champions of the continent.

Curiously, scenes at the time depicted a Czech squad still getting used to the new rule. In the confusion of the final whistle, they believed they still had a chance to get back into the match and edge toward a penalty shootout. It was only after the ecstasy of the West Germany fans in the stands that they realised their tournament was over.

Moments like these shone the new ruling in praising daybreak. While today’s polemical change, VAR, is often criticised for restricting natural gushes of emotion – the golden goal was the antithesis. There were no stoppages in celebration, just accentuation.

Over the following years, the French national team became the dominant force in international football, and it would be Les Bleus who would become best friends with the golden goal. The French-hosted 1998 World Cup was the first time the rule had made it to intercontinental standards, a tournament Aimé Jacquet’s team would win.

It would be the hosts – via a Laurent Blanc strike against Paraguay in the last 16 – that would score the first and only golden goal of the tournament on their way to lifting the iconic gold trophy for the first time.

Again, the golden goal’s utilisation was without controversy, proving it was a good addition to football since Italia 90. However, nothing could prepare anybody for the chaos that uncoiled after the semi-finals of the 2000 European Championships between France and an exceptional Portuguese side that boasted Luis Figo and Rui Costa.

With the score level at 1-1, the game looked destined for a penalty shootout when, in the dying minutes of extra-time, France were awarded a penalty following a desperate goal-preventing handball from Abel Xavier, causing furious protests from the entire Portuguese team.

Reliable as ever – so much so that players could be seen taking their tops off and heading for the tunnel before he had even kicked it – Zinedine Zidane smashed the ball into the top right corner, taking Les Bleus to the final in Rotterdam. It was there that they’d play their part in the most iconic moment in golden goal history.

Thanks to a Marco Delvecchio strike, Italy had the upper hand as the final reached its definitive moments. Entering four additional minutes, it wouldn’t have been impossible that the trophy already had Azzuri written on it – but Sylvan Wiltord’s diagonal low strike late on was enough to finally beat an inspired Francesco Toldo in the Italian goal, taking a buoyant French side to yet another thirty golden goal-chasing minutes.

Whilst the Italians retreated, soaking up the French pressure was only a sustainable tactic for 13 minutes. By that point, the wall was broken and Les Bleus found a second goal to crown them European champions again. Robert Pires rolled it back to David Trezeguet after a jinking run as the future Juventus striker crashed a golden goal beyond Toldo.

On the world stage, the golden goal rule was distinctively popular. It brought emotion to the forefront of the sport and advocated pure excitement. However, it did have its downfalls, and in lesser-known circumstances, the new format produced moments of confusion, misery and complete madness all in one short timeline.

In next week’s feature, we’ll strap you in as we take you on a rollercoaster ride through the chaos in the Carribean Cup, UEFA uncertainties, the death of the golden goal, birth of the silver one, and whether we’ll ever see such a rule ever again.