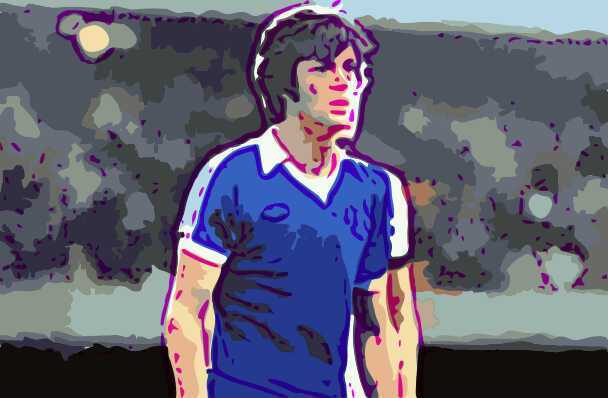 Duncan McKenzie was one of the ’70s mavericks. Players who liked to entertain both on and off the pitch.

Fans loved them, so did one or two Chairmen as they always added on a few quid at the turnstiles.

Criminally undervalued at international level, they would often get bored during games and that’s where the fun started.

People would look forward to their Saturday afternoon on the terraces just hoping to see a glimpse of magic from these unpredictable individuals. Just one moment and that would send them off happy for the week.

But for all the enjoyment the fans got from seeing them, managers were often more suspicious. Guys like this could lose you your job.

McKenzie was in this bracket. Frustrating at times, brilliant at others.

He began his career as an apprentice at Nottingham Forest in 1969 earning £12 per week. One of the drawbacks of the mavericks’ lifestyle was it could be expensive.

Always keen to earn a few quid and always up for a challenge, McKenzie discovered early in his career he had a rare talent. Jumping over things.

‘The only access to training was through a turnstile. When we finished, we only had two jugs of cold lemonade in the dressing room. If you weren’t quick, you weren’t getting any. So I used to bypass the turnstile by jumping over the hedge. It was about five foot high. I just used to hurdle it.

‘One of the lads said, “(Coach) Tommy Cavanagh’s Mini isn’t as big as that hedge, could you jump that? We’ll give you a fiver?”.

‘Well that was nearly half a week’s wages. I didn’t need a second invitation. I just jumped over the Mini as if it didn’t exist.’

The likes of Martin O’Neill and John Robertson were betting everyone in sight that I could jump over their car. For the first two years of my career I was making more money from jumping over cars than I was playing football!”

He later revealed he’d been a high jumper and pole vaulter at school so he’d had some training at least. But still it shocked people he could do it. Can’t imagine any player today trying that, but then these mavericks rarely thought of sensible things to do.

McKenzie spent five years at the City Ground, during which he had two spells on loan at Mansfield Town. Forest were a Second Division side, so a little under the radar. That was until the 1973-74 season when they went on a cup run which took them to the Quarter-Finals.

Their Fourth Round tie was against Manchester City, a decent First Division outfit. In the previous five years City had won the FA Cup, the League Cup and the European Cup-Winners’ Cup. McKenzie set up three goals and scored the fourth in a stunning 4-1 win.

He hit 26 goals that season and six months later McKenzie became known throughout the country as he became Brian Clough’s first signing during his sensational short tenure at Leeds United. Few players could be seen as less likely to fit in with the Elland Road gang, yet McKenzie was probably the one bright spot in an utterly forgettable 44 days for Clough.

Clough moved on, but McKenzie stayed at Elland Road for a couple of years. At the end of the 1975-76 season defender Paul Reaney was awarded a testimonial. Before the game against Newcastle United in May, McKenzie was asked the entertain the crowd by showing off his jumping skills. In front of 12,000 spectators.

“Jimmy Armfield was Leeds manager and he was stood there, puffing his pipe. He said, “Very good son, but don’t ever do it again”.

‘But in many respects it’s the best thing I’ve ever done. Wherever I go, everyone knows about it. There were kids all over the country trying to jump cars — casualty admittances were at a record high! Some nutter even tried to do it with the car coming towards him and broke every bone in his body”

The picture which appeared in newspapers was once voted as one of the most iconic sports pictures ever.

McKenzie then discovered he had a talent for throwing golf balls. Naturally, there was money to be made at this too;

“that came about at Leeds as well. Norman Hunter bet I couldn’t do it. I’m not normally a betting man but I couldn’t refuse to take his bet. I took a couple of steps and launched it so far that it bounced out the ground, we never saw the ball again. Norman’s face was a picture”

Two weeks later McKenzie travelled to Paris as Leeds United lined up against Bayern Munich in the European Cup Final. Listening to McKenzie talk about this years later it’s clear his relationship with Armfield wasn’t a pleasant one. He maintains the new Leeds boss wanted the game to be a tribute to Don Revie. He even suggested Revie should lead the team out, despite the fact he’d been managing England, not Leeds, for the past 12 months.

Armfield stuck with Revie’s players for the team that night as Duncan watched frustrated on the bench. He never got on the pitch as Leeds lost a controversial match, 0-2.

Soon after Belgian side Anderlecht came calling. They’d just won the European Cup-Winners’ Cup, but felt they were in need of a striker. McKenzie reckoned he wasn’t in the running for a regular place at Elland Road so he moved to Europe.

One of the puzzling things about his career was how he was never capped by his country. He was called up a few times in various squads but never got a game.

There was a time in Belgium when he was training with Dutch internationals, Rob Rensenbrink and Arie Haan and they couldn’t believe he wasn’t playing for England. In fact, he says he felt he was closer to playing for the Dutch than he was for England as moving to the continent took him off everyone’s radar.

He lasted just one season in Brussels before returning home and to Everton. He quickly became a favourite with the home fans at Goodison Park but less with management. Billy Bingham had signed him but then got the sack a month later and his replacement, Gordon Lee, was less than enamoured with someone he considered a luxury.

Chelsea was McKenzie’s next home before moving on to Blackburn Rovers. He finished his career in the States with Tulsa Roughnecks.

McKenzie was one of those players many fans held a candle for long after he left their club. In these less than patient days he’d never have made it, but the 1970s had a place for his type and for some, it was all the better for it.

One thing you will never see footballers of today attempt is to jump over a mini. The legend lives on.