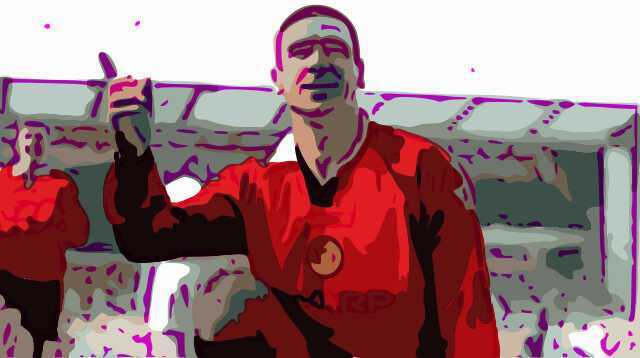 Paul Ince remembered when Eric Cantona entered the fray at the Manchester United training ground in 1992.

“He just had that aura and presence. He took responsibility away from us. It was like he said: ‘I’m Eric, and I’m here to win the title for you’.”

The no-nonsense, hot-blooded and untameable asset.

He endeared himself into Premier League culture with his impudent vision, ball control and touch to direct a trophy-laden period of domination whilst at Old Trafford.

The centre-forward also imprinted an unforgettable personality upon his illustrious six-year stint in England, nearly robbed himself and his adoring fans of this journey when he announced his retirement in 1991.

Cantona grew up in Marseille. A footballing cauldron of passion, soul and expressionism – three traits that the prodigy possessed in abundance.

Unbelievably, Cantona started his career as a goalkeeper, playing for his local team, SO Caillolais. His imperious attacking qualities were quickly recognised and he was converted to a striker.

He joined the Auxerre academy that was headed by the iconic Guy Roux, who shunned the opportunity of signing French striker Olivier Rouyer, to instead prioritise a system focused on developing the next generation of Les Blues – and the young, headstrong, accomplished Cantona was one of the apprentices on his agenda.

Cantona became inaugurated into the public eye when his stunning equaliser against Strasbourg secured Auxerre their passage into next season’s UEFA Cup.

Internationally, he toyed with the opponents. He won the 1988 Under-21 European Championship, netting a hat-trick against England in the quarter-finals. A record transfer to Marseille that summer kickstarted the career of a player, who would never leave the headlines.

But, alongside his gift, there were outbursts of anger and petulance. Whilst at Auxerre he received a two-month ban for a reckless challenge on Michel Der Zakari during a match with Nantes.

His temperament dramatically worsened at Marseille. He labelled Henri Michel, the national manager, as a ‘shitbag’, then whilst on loan at Montpellier he had an altercation with Jean-Claude Lemoult, and narrowly escaped being sacked from the club. His string of idiocies meant he was transferred to Nimes, but after he angrily chucked a ball at the referee, the French Football Federation snapped and banned him for two months.

Cantona and French Football had started as a love story of an imposing and masterful striker with a deft goal-scoring touch, who had captured the heart of Roux and seemed destined on the path for unadulterated greatness. But his history of unnecessary outbursts and the subsequent punishment that followed, painted a striking construct of a player who let his heart overrule his judgement. He declared his early retirement in 1991 at the age of 25, and that was that.

Michel Platini and Gerard Houllier stepped in to stop the insanity. Without their tireless efforts and eagle eye for unprecedented talent, the world would have been starved of the mercurial and spell-binding magnificence of Cantona. To allow a player with that plethora of talent to depart the sport just when he was approaching his prime would’ve been criminal.

Those figures, alongside Cantona’s psychoanalyst, acknowledged that he needed a fresh start to revamp and reconfigure his outlook.

“He’s an island of freedom, generosity and pride,” said Houlier. They viewed Cantona as a player who had everything, and if his burning passion could be channelled in a positive and effective manner, he would possess a lethal weapon for any manager.

“What’s important to me is to have new experiences – to be a neophyte. I live to feel myself in danger.”

He was an enigma and a person who fervently believed in new experiences. Operating on a new found wave of optimism and positivity, he embarked on an extraordinary odyssey to England, where he would unlock his burning potential.

A love affair with England

“66 was a great year for English Football. Eric was born.”

After a trial at Sheffield Wednesday, which manager Trevor Francis did for Platini as a favour, Leeds United became entranced by Cantona’s majesty and jumped at the opportunity to take him under the Elland Road wing.

Within four months of arriving at Leeds, the club won their first league title since 1974.

Hat-tricks against Liverpool in Leeds’ Charity Shield victory and their 5-0 thrashing of Spurs in the league were another clear indication of Cantona’s impeccable pedigree. But his relationship with Howard Wilkinson rapidly deteriorated and eventually boiled over when Cantona displayed a clear annoyance at being subbed off versus Rangers.

Once again, the unpredictable Frenchman was yearning for a new challenge and when Sir Alex Ferguson enquired about his services, Cantona didn’t think twice. The daring switch from Yorkshire to Greater Manchester, two clubs with a bitter rivalry fighting at the summit of the league, signified his unbothered and unfazed mindset. His arrival at United sparked a love affair with the Stretford End that is yet to be replicated. The talismanic forward thrived in red and the next five years would become the bedrock of his unbelievable legacy.

1993 became a historic year for Cantona – his nine goals helped United coast to a Premier League title – their first since 1967. This meant that he became the first ever player to win back-to-back English titles with different clubs. Success and records closely followed him across the continent as his Division 1 victory with Les Phoceens in 1991 meant that he won three leagues, in three seasons, with three different clubs.

A fourth consecutive title followed in 1994. Cantona netted 25 goals in all competitions and became the first foreigner to win PFA Player of the Year.

His first two seasons could not have gone smoother – Cantona embodied United’s success – simply unstoppable. It seemed that an inevitable three-peat was destined.

But on a wintry and hostile Wednesday night at Selhurst Park in January 1995, Cantona plummeted into disgrace.

“I play with passion and fire. I have to accept that sometimes this fire does harm.”

He had kicked out at defender Richard Shaw and was given his marching orders, but he became embroiled in a war of words with a Palace supporter that resulted in the most outrageous and reckless kick-out towards the offender in the stands. A moment of hot-headed madness looked to have cast a doomed future on Cantona. The man who couldn’t do any wrong was the subject of a witch hunt.

Cantona received an eight-month suspension and never played for France again. Repressed and loathed by the media, he had angrily struck out at a fan to bring a premature end to a career in its glimmering prime.

Once again, similarly after his dramatic abdication from football in 1991, there seemed there was no way back for Cantona. Another unceremonious departure from the beautiful game was inevitable.

Ferguson, similarly to Platini and Houllier, couldn’t fathom the thought of Cantona’s exile. United had been pipped to the 1995 league title by Blackburn and the Scotsman knew he needed his starman. He rushed to Paris to persuade United’s adopted hero to continue his legacy.

“If I am here today, it’s because of him,” said Cantona on Sir Alex’s influence.

The recipient of the longest ban in FA history returned in October for a grudge match with Liverpool. Cantona scored and assisted in a pulsating 2-2 draw – a reminder of his unquestionable importance and that he was the missing ingredient to Sir Alex’s title-winning recipe.

The business end of the season approached and between March and May 1996, Cantona scored in six consecutive matches, four of which were the only goals of the game.

He finished the season as United’s top scorer and the league title returned to Old Trafford.

Cantona’s most memorable calling came on 11 May 1996 for the FA Cup final versus Liverpool. He was given the armband after Steve Bruce had to be withdrawn due to injury.

The game sat on a perilous knife edge and seemed destined for extra time, before Cantona had other ideas. The attacker was loitering around the penalty spot when David Beckham whipped in a corner that was met by an unconvincing punch from David James. The Frenchman had backpedalled to the edge of the area with the ball bobbling invitingly in front of him. He then unleashed an unstoppable half-volley that cannoned through a crowded penalty area for the only goal of the game that clinched United the double.

An instinctive, glorious strike that crowned Cantona as the first foreign captain to win the FA Cup. He rewarded his manager’s faith and exorcised the demons of his lunacy in South London 18 months earlier, by returning in the most emphatic manner to underline the perfect homecoming. He had reversed the perspective, he was now revered and praised for his influence –  the indispensable component, the first name on the team sheet, the driving force for a league title.

Unsurprisingly, another title followed in 1997, but United crashed out of the Champions League semi-finals to the eventual winners, Borussia Dortmund and Cantona announced his retirement at the age of 30.

“When I lost the passion, lost the fire in me, I just retired. I tried to light it again but I knew it was the end.”

A man who unquestionably acted on instinct and his gut feeling, he was true to himself and departed the beautiful game on his own terms.

He pursued a new career path in acting and recalled how his parents taught him to lead a life free of fear and scepticism.

“If you say to me: ‘Tomorrow we’ll go and try that’, I will try it – even if it’s something I know nothing about. I am not afraid.”

To others, it was a ludicrous and uncalculated decision, but just as he had done through his football, he followed his heart and never looked back.

Gary Neville on Cantona: “You would never say one player wins the league, but that’s probably as close as it gets.”

The season of Cantona’s exile was the only season during his time at United that the Red Devils failed to win the league. Quality and confidence emanated from Cantona to the rest of his teammates. The charismatic forward was the heartbeat of Fergie’s trophy-winning juggernaut.

Cantona was a maverick. At the time of his arrival to the Premier League, he possessed unseen and unrelenting arrogance that separated him from the masses. Fans attached themselves to his persona and became hypnotised by a player, who was so loveable for his ingenuity and outspoken behaviour.

After just five years at United, he is considered one of the club’s greatest players and left the club in a deep sense of shock and reflection when he hung up his boots.

Post retirement, Cantona described how he has “humour and humility,” and he can just “play with life.” This translated into the way he played on the pitch – he was a fountain of freedom, expression and class.

He was also a player brimming with personality, courage and poise that you simply don’t see anymore.