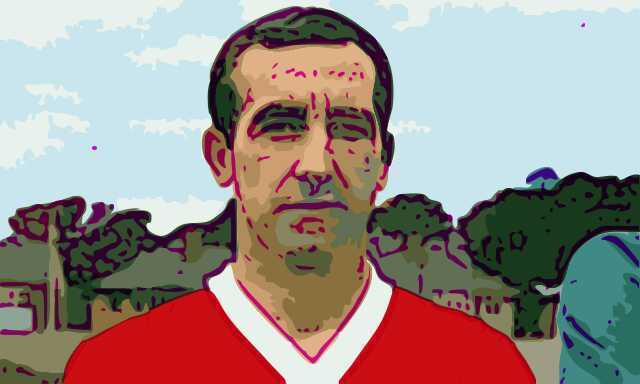 Born in Liverpool on 29 August 1938, Gerry Byrne was the original mentality monster before Jürgen Klopp started ingraining psychology into the teachings of the newfangled game. Before it was coached, Byrne was the cat’s whiskers of a player who played and died for the badge.

He toiled away under Bill Shankly alongside the intestinal fortitude of Ron Yeats, Emlyn Hughes, and Tommy Smith, whose nicknames were ‘The Colossus’, ‘Crazy Horse’, and “Anfield Iron’. Yet, it was he who would leave Liverpool with the parting gift of the legacy as the toughest of them all.

It goes without saying that to earn that superlative in a Shankly squad is a remarkable deed in itself. But you don’t have to hear it from me. Here’s an anecdote from Tommy Smith for your first taste of what Gerry stood for:

“I was only fifteen and playing in a five-a-side game at Melwood. I nutmegged Gerry Byrne and scored and I was on top of the world. A couple of minutes later a ball dropped between us, I went to head it and Gerry headed me and I went down with a gashed eye. As I lay on the ground covered in blood, Bill Shankly strolled across, looked down at me and said: ‘Lesson number one, never nutmeg Gerry Byrne son and think you can get away with it.'”

The moment is something I’d like to think cuspidated Smith’s accession into the madcap world of The Liverpudlian Way. A common purpose among Shankly’s squad that, rather than teaching the city’s psyche, they propagated it. Byrne, however, was one that attracted attention to his manager as someone with a natural-born instinct to execute spirit and tenacity unendingly. He never needed anyone to tell him the importance of football to his adoring fans.

To recount the story of Gerry Byrne is to remember his outstanding character. Within that same character are facets of his identity that can be sketched into significant turning points in his career.

At the start of his professional career with Liverpool, Byrne had to set forth the first characteristic of a strong-willed personality. Resilience. Although joining the club straight from school, at the age of 15, with Jimmy Melia, and signing a contract on the day after his 17th birthday on 30 August 1955 – when given his moment, it didn’t unfold how he had planned out.

Two years after manager Don Welsh tied him down to the club, he was given his debut against Charlton Athletic at The Valley. The 5-1 stuffing was only retrogressed by the left-backs own goal, which simultaneously besmirched his rank in the club’s social stratification even more.

Recalling the situation in a 2008 interview:

“I wish the ground would swallow me up when you score a goal like that. I just passed it back to Tommy Lawrence and he wasn’t there. I got terrible abuse from the crowd.”

Jimmy Melia, on the other hand, Gerry’s auld academy graduation mucka, hit the ground running. He was far more successful in his early days. On his debut, at the age of 18 on 17 December 1955, he scored in front of the Kop against Nottingham Forrest in the second division, to play his part in a 5-2 win.

In the following season, he got a run in the squad, starting 27 times. He supported this progression with a 36-game campaign in his third year under a professional contract, scoring on 10 occasions.

His involvements contrasted with Walsh’s other hopeful Byrne, who managed just one match in the 1957/58 season, and only another six matches in his next three years. The experienced full-back pairing of John Molyneux and Ronnie Moran held sway, stopping the left-back from developing into a starting role.

The arrival of Shankly in 1959 would be when Byrne would get his big break.

“I wasn’t playing in the first team when Shankly arrived. I was on the transfer list, to be honest,”

But ultimately, a strong determination set him apart from previous Liverpool failures. He was reinvigorated by the arrival of the brave-hearted Scot, who he saw as a portal for burying the hatchet. One thing Shanks did at the very start of his reign was a clearout.

A complete rejigging happened at Liverpool Football Club between 1959 and 1960, which would inspire promotion to the First Division. Much to Byrne’s surprise, Shanks’ 24-player declutter did not include him. He, infamously along with Roger Hunt, was among those retained and rejuvenated under the ex-Huddersfield Town boss.

“When Shankly came, everything changed.”

He featured in 38 league and cup matches as the Reds finished third for the fifth time in a row in the second division. Considering he only played seven times in the previous three seasons, this was a major improvement in Gerry’s career.

Shanks was revolutionary in his ability to detect talent through a player’s personality. Whereas his rival managers at the time would hawk at the sight of a footballer with an occult left boot and dribbling so incisive that it looks like the ball is glued to their feet, the Scotsman favoured a squad of grit and steel.

Deploying Byrne’s determination to its fullest potential meant that the left-back was an ever-present in the 1962 Second Division-winning team that jump-started the European glory days. He played in 38 of Liverpool’s 42 league games their first year back in the big time and he also played in all seven of Liverpool’s cup ties during their run to the 1965 FA Cup final, a game in which Byrne would write his name in Liverpool folklore forever more.

Byrne is best remembered for his courage and fearlessness in the 1965 FA Cup final where the full-back’s day was stopped dead-still within seven minutes when a shattered collarbone surely put an end to his season.

In spite of being in considerable pain, he played right through the match and half an hour of extra time, setting up Liverpool’s first goal for Roger Hunt, while offering opponents Leeds United scarcely a clue about his physical distress. When Liverpool’s trainer Bob Paisley told him he had broken his collarbone in a seventh minute challenge with Bobby Collins, “I’ll get by,” was Byrne’s response.

It was a typical piece of understatement from a reserved character who went on to deliver a performance very similar to hundreds of those he gave in Liverpool shirt. But this one stood out in the crowd as one that handed The Reds their first-ever FA Cup triumph, after years of the blue half of Merseyside throwing shade on Anfield over their inability to lift the country’s most prized trophy.

It wouldn’t be the last time Gerry would simulate his fitness in the face of pain. The following season, the Liverpudlian dislocated his elbow in a European Cup Winners’ Cup tie against Celtic at Parkhead. Although in agony, he played on until 10 minutes remained.

The next day, Shankley would take him to hospital where it was revealed how black his arm became from wrist to shoulder. Fortunately, the doctor’s found no breakages. The next day, he returned to action in their league fixture against Stoke City.

In an era when an increasing number of players spend as much time on their backs as on their feet, the thought of playing with a broken fingernail would be enough to give the likes of Anthony Gordon and Jack Grealish a hernia.

A meeting with Gerry Byrne might’ve straightened them out.

Bill Shankly, who admired Byrne’s desire to make it to the top, described him as “The best professional I ever worked with”.

“He wasn’t flashy and he would not score you goals but he was hard and skillful and gave you everything he had. More than that he was totally honest, which is the greatest quality of all.

“He was a true Liverpudlian who couldn’t look his fellow Scousers in the face after a game unless he’d given everything he had for 90 minutes.”

To be praised by Shanks was the ultimate privilege for any footballer. He was a stern boss. One that wouldn’t give too much away. So when he did say something positive, you knew it had to be true.

Praise for his professionalism became the finishing touch to Byrne’s four personality traits that made him Liverpool’s precursor to their modern day smatterings of the importance of psychology. If it wasn’t for Shankley, it may never have been, for Byrne ended up not being selected for his ability but rather his brain.

That being said, he turned out to be a magnificent footballer after all. That’s partly down to his manager’s talent detection but also thanks to his hard work, loyalty and ‘never say die’ attitude that earned him his stripes.

Before psychology was taught, it came naturally. Gerry Byrne was the original mentality monster. The fighter. The one who would die for the Liverbird upon his chest if Shanks asked him to. Without any second thought. He was selfless. But above all, he was fair.

Never once sent off in a one-club career at Anfield spanning a dozen years and 333 league and cup games, Byrne was hard but honest. He was known as “The Crunch” but the reference was to tackles that invariably claimed the ball.

Byrne said at the time when his playing days were fresh:

“I was nicknamed the ‘Crunch’. I was a clean player. I was hard but fair. I used to wait for the ball to come and then I was on my way. You hit someone when the ball was there and that was it. That’s how I got the crunch. I didn’t go after players intentionally. I was never sent off in my life.”

Unfortunately, on 28 November 2015, in a Wrexham nursing home, Gerry Byrne passed away after his battle with Alzheimer’s disease. What is left of his legacy lives on in the history books as the mentality monster that never needed a second word to understand the assignment.

Instead, he was the first of his kind.