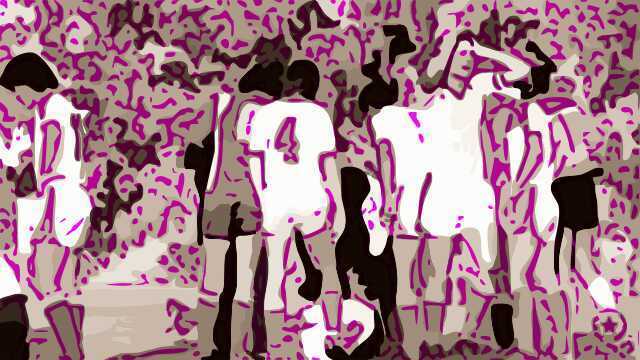 The rivalry between CSKA and Levski Sofia is one of the fiercest as they are the two most popular and successful football clubs in Bulgaria. Known as The Eternal Derby COPA90 chose it as the 2nd ‘Maddest Derby in Eastern Europe’. One could argue it’s a pretty competitive list.

1985 was probably the most notorious meeting the two sides have ever had. It had a mass brawl, players attacking each other and a further bundle in the tunnel. The incidents were violent, the fallout was bitter and acrimonious, and in the end, most of it was rescinded as things returned to normal.

The first meeting between the two came in 1948, the first year of CSKA’s existence. Levski won 1-0, but CSKA went on to win the league that year. During the 1950s they won eight of the 10 titles on offer. Their roots stem from the army, and often referred to as the army team.

Levski was founded in 1914 and named after Vasil Levski, a Bulgarian revolutionary considered a national hero. They are known as ‘the blues’ or even the ‘team of the people’. They’d already won five league titles before CSKA came into being. In all the two clubs have won 57 between them, (CSKA 31, Levski 26). They’ve been dominant in the cup too, (CSKA 26, Levski 21).

The success of the two sides made them more popular and with this populism came clashes between fans and players.

Bulgaria had been under the control of the Communist Party after WWII. The cup had been known as the Soviet Army Cup until 1982 when it changed to the Bulgarian Cup.

19 June 1985 the Cup Final was held at Levski Stadium. The game came just three weeks after the Heysel tragedy and so the state ordered everything around the stadium to be monitored extremely closely.

Levski had just won their 16th title, their second in successive years. This had stopped CSKA’s run of four successive championships. Levski were also the defending cup holders.

Emotions were running high before the game. It had been nine years since these two last faced each other in the cup final, and with Levski having won the last five derbies, they were feeling pretty chipper about the event. In fact, CSKA had won just one of the last 10 meetings between the two and their fans were desperate for success.

In the build up to the game, CSKA legend, Stoycho Mladenov couldn’t recover from an injury in time. He’d been instrumental in his team’s emergence through European competitions in the early 80s. He scored both goals in a 2-0 win over European Cup holders, Liverpool in 1982. A year later he was Footballer of the Year. His place in the starting line-up went to 19-year old, Hristo Stoichkov. He’d only been at the club for a few months, and was yet to play for the U21 side, let alone the national team.

The game started without incident. But it didn’t take long before the fuse was lit. 26 minutes in and a long ball from the back went over Levski defender, Nikolay Iliev’s head. As he waited for the ball to bounce CSKA’s Georgi Slavkov nipped in, stole the ball and hit a left foot shot low past Borislav Mihaylov. Both Iliev and Mihaylov immediately complained that Slavkov had used his hand to beat the Levski defender. The referee, Ahmed Yasharov, wasn’t interested. The Levski players surrounded and started to jostle him. Meanwhile, Slavkov decided to milk his fortune by taunting the crowd.

The spark that lit the fire.

Even when they kicked-off again the Levski players were still arguing with the ref, who appeared more entrenched in his view than ever before.

CSKA still lead early into the second half when Plamen Markov played a one-two in the centre circle and went on a run which took him to the edge of the Levski area. Under a challenge from left-back, Antoni Zdravkov, Markov hit the deck. The ref blew for a foul which again incensed the Levski players.

From about 18 yards out, Iliya Voynov took the free-kick left footed and hit it into the top corner for a 2-0 lead.

Within minutes, Levski right-back, Plamen Nikolov surged forward. A rash challenge came in from his left, which he just about managed to ride. The perpetrator, Kostadin Yanchev then rolled about in agony. The ref bought it and duly booked Nikolov.

Soon after, CSKA came forward again. Markov played a clever one-two with Voynov whose pass found the CSKA number 10 in the area. He slipped one challenge but his low shot was blocked by Mihaylov. As the ball came back out Nikolov took it across the area but Voynov matched his run. As the CSKA number seven got to the ball first he, rather theatrically, fell to the ground and once again the ref had little doubt about the punishment. A penalty.

The fire was now in full flow.

The ref again was faced down by angry Levski players. Mihaylov ran towards him and pushed him twice as he shouted in his face, and Iliev sarcastically patted him on the back for his judgement.

Mihaylov eventually stood on his line waiting for Slavkov to take the penalty, still muttering to the referee about the injustice. He managed to compose himself sufficiently to guess the right way and save the kick, diving low to his left.

The atmosphere was now toxic and it wasn’t long before the tackles started flying in.

Nikolov swung an arm at Slavkov in the centre circle, then immediately threw himself into a challenge on Zdravkov. It was dangerous and with the CSKA player bleeding, Nikolov also saw red as the ref sent him off.

Seconds later down Levski’s right-wing Yanchev flew into a challenge on Emil Spasov. Spasov immediately got back up and grabbed Yanchev around the throat. Stoichkov quickly got involved to back up his teammate and pretty soon there was a melee on the touchline with officials and substitutes also doing their bit.

Still out of control of things, the referee waved a couple of red cards in the air and Yanchev and Spasov were sent off.

The resulting free-kick was floated into the area. CSKA’s keeper, Krasimir Dossev punched it away but only to Todorov, who oddly just picked the ball up in his hands. It was chaos.

Nasko Sirakov then went on a run down the right of the area and should’ve been awarded 10/10 for artistic impression from the judges, as he threw himself to the ground. It was Stoichkov who challenged him with little more than a hand on his back, but down Sirakov went and to the astonishment of everyone, the referee pointed to the spot.

Sirakov got up and took the penalty. Dossev got his hand to it but couldn’t stop it from going in. 2-1.

Levski just didn’t have enough to push for the equaliser and CSKA had pulled off a famous win.

But that wasn’t the end of the story, not by a long chalk. Right on the final whistle Mihaylov just couldn’t hide his anger and ran to the centre-circle to jostle the ref one more time.

As the players left the pitch there was trouble in the tunnel. Much like with Arsenal and Manchester United many years later it is not entirely clear what happened. But what everyone can agree on is that something happened.

There were rumours of further fights, colourful language and even a broken rib for the referee. But even now no one has owned up to the goings on.

In his autobiography, Stoichkov had this to say;

“After the last referee’s final whistle, Asparuh Yassenov was surrounded by Levski’s players. Among them were Borislav Mihaylov – the goalkeeper of the national team, Cisco Sirakov – also a national and former competitor of Zaragoza and Espanyol. They hit him, insulted him, threatened him, pushed him… while we celebrated the success and our captain Georgi Dimitrov held the trophy in front of the enthusiastic audience of CSKA. At the age of 19, I enjoyed my first cup, won in my first season with the army team,”

The fall out was almost immediate. The press was full of accusations and how the clubs must be punished. The General Secretary of the Bulgarian Communist Party, Todor Zhivkov personally ordered punishments. Two days later the Bulgarian FA acted. Both clubs were suspended. The league title Levski had just won was stripped from them and given to third placed Trakia Plovdiv. Fourth placed Lokomotiv Sofia were to replace CSKA in the UEFA Cup. Each club’s respective Chairmen were banned, and a couple of coaches also received bans.

Various players received bans. Mihaylov, Nikolov, Velev, Sirakov and Spasov from Levski were banned from football for a year. Yanchev from CSKA was also banned for a year. Stoichkov received a lifetime ban. It did seem a little heavy handed, but the Bulgarian FA, under pressure from the communist party were obviously keen to show they wouldn’t accept it

Levski publicly accepted their punishment, which must’ve been tough. Many observers felt this was their strongest team ever, and at an average age of 24 would have been hoping for success for many years to come.

Spasov was particularly hit by his ban. A week before the Final he’d negotiated a transfer to Porto. In the days of communist eastern Europe and the Iron Curtain, this was rare. Players just didn’t leave the country. The transfer was cancelled as he wasn’t allowed to leave. A year later he was able to move to Sweden and then to Belgium with Antwerp. But his international career was over.

Levski subsequently adopted the name of Vitosha and CSKA became Sredets. The two clubs finished outside the top three the following season, although CSKA retained the cup. Beroe Stara Zagora won their only league title to date. 1987 saw them back as the top two and in 1989 their original names were restored and so were the trophies won in 1985.

It wasn’t just domestically where the bans were felt. National manager, Ivan Vutsov was without four key players as they prepared for Mexico ’86. Post-cup final 1985 the national side won just two of their seven internationals, one of those was against Luxembourg.

Eventually, both Mihaylov and Sirakov were allowed back into football and the national side and both made the squad for Mexico. In their opening game against world champions, Italy, Mihaylov made a number of important saves and Sirakov scored a late equaliser to gain a draw. They went out to the hosts in the Second Round.

Stoichkov’s lifetime ban was reduced to a year and he left to join Cruyff at Barcelona.

Mihaylov moved to Reading later in his career for what was a club record fee at the time. After retiring he moved into administration and became vice-president of the Bulgarian FA, and in 2005 he became president. He courted controversy when he resigned from his post after the prime minister called for him to go. This came after racist abuse was aimed at England players during an international in 2019. Two years later he sensationally withdrew his resignation and re-appointed himself.

The 1985 Bulgarian Cup Final was a fairly unsavoury incident in Bulgarian football in which the officials were quick to act. But the subsequent reversal of all the punishments seemed to make a mockery of it somewhat.