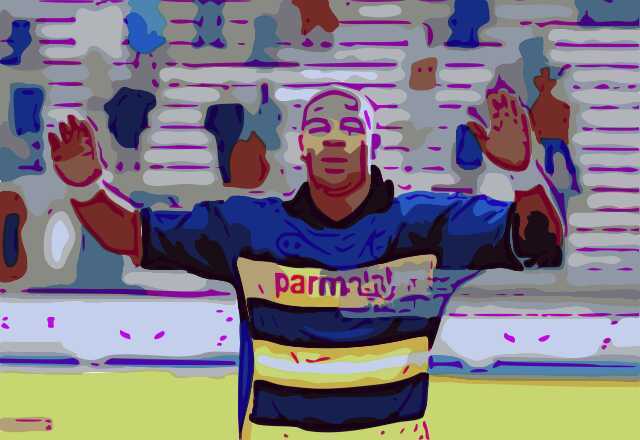 A new partner in Town:

To help ease the burden off their talismanic Brazilian, Inter brought in the services of one Zlatan Ibrahimović in the summer of 2006, for around €24 million. Right away, the Swedish superstar could see the pure talent of his fellow strike partner. When asked who was the most talented player he ever played with, during an interview in August 2017 to promote his new video game, Ibrahimović replied:

“When I came to Inter, the first thing I said to the president was, I demanded him to stay because he was the player I wanted to play with. Because the way he was, he was an animal.

The words of Ibrahimović show both the respect and disappointment he had for his time with Adriano, and with good reason. In their short spell together, the pair would score a combined tally of 21 goals between them, with 15 of those coming from the new boy Ibrahimović.

Adriano’s six goals in 30 appearances was his worst goal return since moving over to Italy from Brazil, and was further evidence of the player’s off the field influences affecting his performances on it.

All hands on deck

The atmosphere at Inter during President Massimo Moratti’s time at the club has been described as one of family, so it would be no surprise that everyone at the club wanted to succeed in bringing Adriano back from the abyss, despite his behavior no longer being tolerated.

In the same interview from 2017, then captain Javier Zanetti encapsulates the feeling at the time and how it was not just him trying to pull the Brazilian from this slump.

“Ivan Cordoba spent one night with him and said: “Adri, you’re a mix of Ronaldo and Ibrahimovic. Are you aware that you could become the best player ever?”

“We did not succeed in pulling him out of his depression and that is perhaps my biggest defeat of a whole career. It still hurts me that I was so powerless.”

If there is any uncertainty about how much the Brazilian meant to his teammates, then Zanetti’s quote paints a different picture of a man who was adored by his teammates, but was in too dark a place to know. The 2005/06 season would be the last true display of Adriano at the peak of his powers, where he showcased the talent that earned him the nickname ‘The Emperor’ in the first place.

Searching for the lost passion back home

It soon became clear to Adriano that he needed to rediscover his love for the game that once gave him so much joy. This led to him informing Moratti of his wishes to go back home to Brazil to be closer to his family, to see if would help the grieving he had yet to confront.

Out of love and respect for their Brazilian talisman, Moratti and coach Roberto Mancini agreed for Adriano to go train with the Brazilian club São Paulo in 2007. Shortly after, the Italian giants sent Adriano on loan to the club in December of that year for the remainder of the 2007/08 season. Deep down they hoped that this would be the remedy to resurrect the old Adriano that once dominated Italian football.

Speaking in the same interview to The Players Tribune in 2017, Adriano explained his reasons for deciding the time was right to leave Milan for a while to return home:

“When I returned from European football, I took time off, nobody understood why. The press was like ‘Adriano could be earning millions…’. I could not care less. Your happiness matters more than money.”

“I had lost my dad and I didn’t want to lie to Moratti. He gave me the opportunity to become the Emperor. I did what I did, to come back to Brazil, because I knew I really needed to come back here…”

Back to the homeland – São Paulo

The return of one of Brazil’s stars resulted in São Paulo fans standing in line for hours just to get a shirt with ‘Adriano’ and the number ’10’ on the back. The fanfare would continue with the striker both goals in a 2 -1 win over Guaratingueta on the opening day of the 2008 Paulista tournament.

However, Adriano’s season at São Paulo would not be a success, with the player still skipping training sessions and showing a lack of ambition to be the player he once was and whom the footballing world missed dearly.

Altercations with club photographers, numerous behavioral fines and a goal return of just six goals was not enough to persuade São Paulo to make the deal permanent. Instead, the club insisted the loan be terminated sooner than agreed, so that the player could go back to Italy.

The return back home to Brazil had been an eventful but unsuccessful one for the troubled striker. On top of this, there had been a change at the helm at his parent club Inter, one that would see a higher demand for the player than he had yet to experience before.

Now back at Inter, Adriano would have to impress his new coach, one José Mourinho, the self proclaimed ‘Special One’, who had won numerous trophies wherever he coached.

The two personalities would have a fire and ice relationship, with Mourinho’s old school man management style sometimes bringing out a glimmer of the old Adriano but not as much as he demanded. Not even the Special One would have enough magic to bring back the animal in Adriano, thought to still be there deep down. In fact, Mourinho’s style made the striker rebel even more to the ‘tough love’ approach of his coach, with a showdown on the horizon that could not be prevented.

The end of an era

With a lack of involvement in the new Mourinho era at Inter, Adriano decided not to return to Italy from his native Brazil after a break in the season. The Brazilian would then announce that he wished to take a break from football to heal himself physically and mentally.

This news did not sit well with Inter or Mourinho, so an agreement was reached which saw the club terminate the Brazilian’s contract after 8 years at the club, making him a free agent. During his time at Inter, Adriano would go on to score 73 goals in 163 appearances for the club whose fans and players adored him.

On the 6th of May 2009, Adriano signed a one-year agreement to return to the club where it all began, Flamengo. After a hero’s welcome, the Brazilian would score on his second debut for the club in a 2-1 victory over Atlético Paranaense and go on to bag his first career hat-trick a month later in a 4-0 victory over Internacional in the league.

Already, Adriano was becoming a vital player for his old club and looked like the dominant force of old with his 19 goals in 30 appearances playing a huge role in leading Flamengo to their first Brazilian Série A title since 1992.

The Brazilian’s inspirational performances in the title winning season saw him earn a new deal with Flamengo, and he returned their faith by carrying on where he left off. In the Copa Libertadores, the highest level of competition in South American football, Adriano would find the net four times in seven appearances.

News of the Brazilian’s apparent re-emergence spread back to Italy, where Roma submitted an offer to acquire the now 28 year old’s services on a free transfer in June 2010. This move by Roma was seen as the chance for the Emperor of old to go back to the country he once dominated and hopefully take them higher in the process.

This euphoria would become a nightmare for both the club and the player, with the striker making only five appearances during his seven months at the club, with no goals scored.

Roma’s dream soon came to an end when the club decided to terminate the player’s three-year contract early on 8th March 2011. Apart from the lack of playing time, the club’s decision came after Adriano failed to turn up to training as scheduled after spending weeks in Brazil recovering from a broken arm, annoying many at the Italian club.

Later that month, Adriano once again agreed to return to his native Brazil and sign for Corinthians on a one year deal. Unfortunately, less than a month into his time with his new club he suffered a rupture in his Achilles tendon, resulting in him being out of action for 6 months. Upon his return, the Brazilian looked like a shadow of himself, as during this time he had gained a substantial amount of weight as a result of his drinking and lack of ambition to keep as fit as possible.

Adriano would go on to score his first and only goal for Corinthians, seven months after signing, against Atlético Mineiro to give Corinthians a two point lead at the top of the league with only two games to play.

Corinthians would go on to win the league that season. It would be the second Brazilian league title of his career, yet with far less of a contribution compared to his impact with Flamengo two years earlier.

Despite winning the league with Corinthians, the Brazilian club felt the time was right to part ways with him. As with the previous two clubs, the attitude and motivation of the player would be what saw his time with the club come to an end after only a short period. Therefore, in March 2012, Adriano’s time at Corinthians was not the success both the club and player expected it to be. After short spells with fellow Brazilian club Atlético Paranaense and MLS side Miami United, the Emperor decided the time was right to walk away from the beautiful game for good, retiring at the age of 34 in 2016.

A Legacy to remember… but not fulfilled

Throughout his career, Adriano would win fourteen major honors at both domestic and international level and is seen as a legend at both Parma and Inter Milan. It would be these two clubs where he would display his talents against some of the best in the game.

However, some will see Adriano as the most notorious case of a ‘What If’ career in football, and they may have a point, as the man himself would tell his side back in 2017:

“Whenever I go to Italy, people ask me. ‘Why did you give football up?’ I went from a guy that lived in a favela and had nothing to being called The Emperor. That is such a responsibility. And we are talking about a worldwide reach here…”

It is quick for many to forget that Adriano is seen as a generational talent of the game but, like all of us, is a human. A human who encountered something some of us cannot comprehend and that some have been unfortunate to experience, the death of a loved one.

Combine this with having the world at his feet at such a young age, and it is no surprise that the ‘Emperor of Italian Football’, would become nothing but a shadow of his former glory.

Many kids today may have only heard the name ‘Adriano’ from those who speak of his freakish statistics on a video game of the past. Yet, to the fans of Inter Milan who saw him at the peak of his powers, he will always be known as ‘The Emperor’.