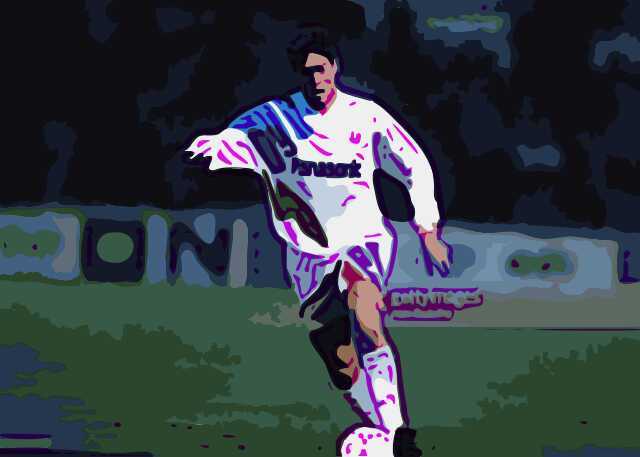 Stepping off the plane and feeling the warmth is a sensation associated with Brits and their holidays abroad. But for home-grown footballers, it’s not usually a warmth that ensues greatness on the field when they opt for a classy change from the rapturous aggro at The Den to the wine-sipping rivieras in the south of France.

Chris Waddle wasn’t your archetypal English player. An exceptional footballer who was seemingly cut from a different cloth to his compatriots at home, Waddle was never one to settle at Tottenham Hotspur, so when the chance came to join Marseille’s Galactico in 1989, to retreat from the concrete-clad suburbia that is north London, he grabbed the opportunity with both hands and took it in his stride nonchalantly.

By the time he had finished in France, he was known more commonly as ‘Magic Chris’, a name he would don with an appearance that featured a glorious mullet that looked a lot like if the whole of the 80s was glued to someone’s head.

In essence, Waddle was a pop icon himself, the David Bowie of the late-80s and early-90s, the showreel celebrity who was known for his football as much as he was recognised for his outlandish style.

We all remember the Jonathan Woodgate’s of the world – those who don’t quite shine away from home. Whether it’s down to homesickness, or a lack of adaptability to the hotter climates, Waddle could have easily been placed into the same category as Joey Barton, Ravel Morrison, Stan Collymore and Ashley Cole as a player that failed to become England’s foreign poster boy.

He didn’t fail. Actually, he did the opposite. His time in the sunny south of France, before his eventual arrival in southern Yorkshire, was a rousing success. This is an account of Chris Waddle in Marseille, and how he lit up the French league.

The urgent necessity to flee his homeland

Football in England during the 80s was a solemn affair. Following the Heysel Stadium disaster that brought an end to the lives of 39 people, there was an ominous sense of impending doom for English football when the punishment of a European competition ban ushered many deserving footballers to flee the country.

Waddle was no different. He identified his worth and fled when Marseille came knocking. But it didn’t come as soon as the ban was put in place in 1985. Instead, just like Glenn Hoddle, he was an anomaly in the dramatically shifting old first-division environment. The duo were seen as two players that shone in the face of adversity in the late-80s.

During the mass evacuation of talents in England, agent Dennis Roach was instrumental in the departures of key players. Roach was a controversial figure, but also a hugely influential one. “He is probably the one agent who can walk into the boardroom of any big European club, a position he has achieved by a continuing run of successful deals,” note Alex Fynn and Lynton Guest in Out of Time, a 1994 dissection of the English game.

“These include Mark Hateley to Milan, Glenn Hoddle to Monaco, Mark Hughes to Barcelona, Trever Steven to Marseille, Des Walker to Sampdoria and John Toshack as a coach to Real Madrid.”

After four more seasons of blessing the shires with his football magic, Waddle would eventually be the third-highest transfer of all time when he joined free-spending Ligue 1 club Marseille, for a fee believed to be in the region of £4.5m. He was 29 years old, primed to play in the tournament of his life – what turned out to be the last World Cup of his career – and then he had the additional pressure of living up to high expectations in a country he knew little to no language skills in. The extent of his ability was “Bonjour”, “Au Revoir” and counting to 10.

While his newfound friendship after his arrival to the Mediterranean-soaked Provence wasn’t quite like his unbreakable bond with Hoddle (whom he found to be his perfect music-making partner when the then-Spurs duo released Diamond Lights, which peaked at number 12 in the UK charts despite ultimately being a synth-induced pop cringefest) Waddle fit seamlessly into the OM setup with the help of master-volleyer Jean-Pierre Papin.

As he settled quickly into French life, Waddle was brought in by Marseille owner Bernard Tapie in a punt to form the first wave of galácticos, before the term had even been coined.

He joined a team that was already jam-packed with superstar names. Eric Cantona, Papin, Didier Deschamps, Jean Tigana, Carlos Mozer and Enzo Francescoli were just some of the names that made up a great Marseille team throughout the 90s.

And although Waddle wasn’t as fit as his teammates in the opening games, and he didn’t hit the ground running, he soon showed his fans what the club had paid for.

Waddle, after controlling a lofted ball into his chest against Paris Saint-Germain before flicking it over goalkeeper Joël Bats and back-heeling it into the back of the net, had quickly proved his worth on the pitch.

And he continued to impress in his Marseille days.

His goal against PSG was from another planet; nothing like you’ve ever seen. For something so audacious, you’d think we were raving about his do, but we’re not – his talent with the ball at his feet was immeasurable. Beyond compare. It was Chris Waddle in his finest hour.

The pop icon was doing it on the continent, and to support his football magic, he released another song, this time in collaboration with teammate Basile Boli. Granted, it wasn’t as successful as Diamond Lights, but it left a lasting impression back home. Magic Chris was just as good off the pitch as he was on it, and to this day, we are waiting for a live gig.

Nevertheless, it was on the field he earned his best credentials. Memorable feats for the Gateshead-born creative midfielder in the blue and white of Marseille included three league titles and a trip to the 1991 European Cup final. Although ending in defeat when faced against underdogs Red Star Belgrade, Marseille’s dazzling football was sending heads spinning in their direction. They were at the centre of attention, and of course, the locals took note of the notable impact their favourite Englishman was having on their team.

Among his admirers was a certain fabled French figure in Thierry Henry, who, in 2016, said: “I grew up supporting Marseille. What he was doing with that team, was a standard I’d never seen before. He could dribble around a player without touching the ball. In Marseille, he is a king, a legend, a god – however you want to call it.”

By 1990, Waddle had established himself as a true great. But following the conclusion of Italia 90, the international tournament provided mixed emotions for him – reaching the semi-finals in an excellent England squad, led by none other than Bobby Robson, but ultimately missing the pivotal penalty against West Germany in a moment of misfortune that shrouded an otherwise fruitful career.

His miss stamped ominous anxiety onto Waddle, who less than 12 months later elected not to take one in the European Cup final. That year, 1991, also marked the last England cap for the Tynesider, with Graham Taylor’s obnoxious attitude towards Waddle’s tactical disagreements seeing the winger essentially banished from future squads.

In the summer of 92, lingering financial doubts loomed large for free-spending Marseille, and they were forced to try to move on some of their star players. As Waddle watched on at the departures of his fellow teammates Trevor Steven, Leonardo Rodriguez, and even the legendary Papin, he soon washed up on the British shoreline once more to see out his career in Sheffield.

Disliked by few (Taylor), loved by the masses, Chris Waddle was, and still is, England’s best European export. The culture shock, the warmth that hit him when hopping off the plane; nothing fazed the Tynesider as he gripped the continent with his spectacular football and pop cultural style trims.

The British like to joke that the worst part about France is the French, To be honest, I think they probably say the same about us. Arguably, Magic Chris is the only idiosyncrasy in this discussion, He was lavished with love everywhere he went, and he certainly never turned out to be another Jonathan Woodgate of the world.