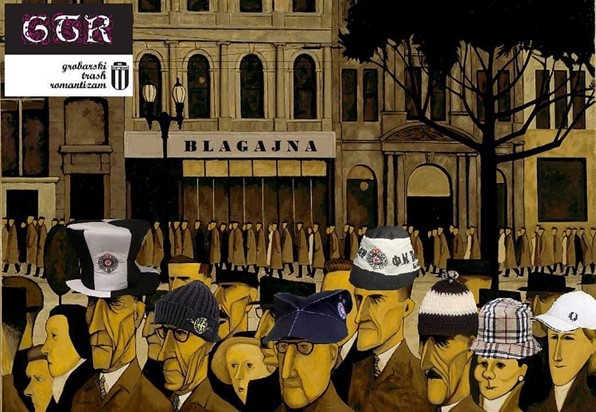 Walking the streets of the Serbian capital Belgrade, especially the Dorćol neighborhood – voted as one of the 10 coolest in Europe by the Guardian –  it’s easy to spot many murals of famous people painted in a very similar style. Writers, poets, actors, and sportsmen carved on city walls tell a story about art, football, its fans, and the city itself.

Belgrade is a unique city. Set on a bank of two rivers that bridge east and west, over 7000 years old, and somewhere that has been besieged and destroyed more than 40 times, it’s a place with a turbulent history. Here, socialist blocks are squeezed between art nouveau masterpieces and remnants of the Habsburg legacy contrast with Ottoman relics and modernist monoliths. It’s a city rich in culture and beauty that is often overlooked, with a spirit like nowhere else in the world.

Belgrade is also a city divided. Its Topčider Hill –one of more than 30 hills of Belgrade – is home to the two biggest football clubs in Serbia: Partizan and Red Star. Once part of the Yugoslav ‘Big four’ (alongside Croatian giants Dinamo Zagreb and Hajduk Split), nowadays the two Belgrade clubs are dominating the Serbian football scene, both in the number of trophies won (since the breakup of Yugoslavia, only once was the league champion neither Partizan nor Red Star) and in the number of fans (it’s estimated that around 90% of all football fans in Serbia support one of the two sides).

One of the fiercest rivalries in all of sports (since both Partizan and Red Star are not just football clubs, but sports societies with clubs that compete in more than 25 different sports) was born just after World War II in 1945. Red Star was formed in March by the state secret police, while Partizan was formed in October as the sports club of the army. In almost 80 years since, Belgrade Eternal derby has transcendent sport, becoming a much higher affair, a thing of politics and religion, and a vital part of day-to-day life for most fans.

The intensity of rivalry is explained by its omnipresence.

“‘When everyone in the country, from the president, to school teacher, to the homeless guy on the street is either us or them, it’s easy to see the rivalry in everything you do’

explains one Partizan fan. It’s also a thing of socio-economics. In a country as economically crippled and starved of opportunity as Serbia, sport serves as a proxy for all the feelings of glory and achievement that so many of its citizens are denied as individuals. The socialist legacy is also the fact that both clubs are still state-owned, which leaves room for a neverending cycle of favoritism accusations from one set of fans to another and vice versa.

This was beautifully captured by journalist Bogdan Tirnanić in his book Belgrade for Beginners, where he claims that

‘State favoritism of Red Star created an army of to the death loyal Partizan fans.’

Having all these things in mind it becomes clear why the match and scoreline become intensely personal and sometimes very violent.

But, away from the hooliganism and violence that Eternal derby is known for, a group of Partizan fans decided to express their obsession in a very different way. And it all started with a guy with a broken heart. After his girlfriend left him, Ivan Lovrić, then a 26-year-old Partizan fan from Žarkovo, posted on Facebook a picture of a modified Lord Byron poem ‘She walks in beauty’. Instead of saying ‘Of cloudless climes and starry skies’ the new text stated: ‘She walks in beauty like the night, and I live for Partizan and fight’. His friend Ivan Sarajčić made the comment

And so it was.

The idea of Gravediggers Trash Romanticism (or GTR for short) is to connect Partizan with culture, through art, literature and music, showing in the process that Partizan itself is much more than just a sports team. Using ‘slight interventions’ in famous and less famous paintings, poems, songs and other various art forms,  GTR creates a mixture of reality and fiction, a parallel Partizan-centered universe in which their football club is synonymous with art itself.

This is achieved by altering the work of famous artists whom the creators think, based on their personality and/or work, would be Partizan fans had they not been born in another time and space. Then, it is the act of putting them next to the people who actually were Partizan players or coaches who were so skillful that it could be argued that they turned the sport into an art form. GTR shows us famous works by Baudelaire, Poe, Munch, Orwell, Yesenin, Schopenhauer and many more as unambiguously Partizan inspired, related and dedicated. Simply – everything is Partizan and Partizan is everything.

Shortly after the initial success of the GTR Facebook page came the first number of its fanzine Grobarski Trash Romantizam – Periodical of Art and Philosophy, filled with essays, think pieces and poetry. In the 13 (so far) published issues of GTR Periodical, we can read about the adventures of longtime Partizan supporter Henry Chinaski (written by longtime Partizan fan Charles Bukowski), Edgar Alan Poe’s Partizan-related poetry, Morrissey’s explanation of why and how he became a Gravedigger, Orwell’s encountering with Partizan founders in Spanish Civil war, or just genuine pieces about why Partizan’s administration is the worst or why Red Star should always be hated with a passion.

And it didn’t stop there. Slowly becoming a cultural (or better said countercultural) movement, the next step was an art exhibition solely dedicated to Partizan. On the 22nd of November 2013, the first GTR exhibition was opened to commemorate the ‘430 days of GTR project, 65th birthday of Radomir Antić (club legend) and 29th birthday of Scarlett Johansson.’

Since then, GTR has held four more exhibitions in art galleries in Belgrade dedicated to the most significant anniversaries of the club. Marking the occasion of its 70th birthday, for example, a theatre show, ‘Kadinjača’ was dedicated to the former basketball coach Duško Vujošević. There has even been a fashion show in 2016 when GTR and designer Ivan Golubovć presented a collection named ‘Van_Gooal’, inspired by the punk movement and black and white colors. They authored monographs, books, and a punk-rock music album. GTR also raised money to help those in need, as well as to help smaller clubs in Partizan families such as rugby, water polo or the rowing team.

However, surely the most visible and visibly impressive aspect of GTR is its murals. Mostly concentrated in the Dorćol neighborhood, there are now more than 25 of them in Belgrade and many more all over the country and in the Serbian diaspora. The focus was initially on Partizan players, but that soon spread to iconic figures in art, music, literature, cinema and the rest.

All painted by local artist Milan Milosavljević Derox, they present a creative and aesthetic love letter to one of the most successful football clubs in the entire region. Next to club legends such as highest goalscorer Stjepan Bobek, best goalkeeper Milutin Šoškić or the legendary team of ‘Partizan babies’ who played in the 1966 European Champions Cup final, there are famous local legends and cultural figures who are Partizan fans, such as poets Duško Radović and Brana Petrović, actors Srđan Todorović and Bogdan Diklić, singers Zoran Kostić Cane and many more.

There are also people whose link to Partizan or Belgrade is not as clear, such as Joe Strummer, George Orwell, Steven Patrick ‘Morrissey’ and others. While it at first glance may seem strange to put them next to real Partizan legends, in parallel GTR universe all of them are loyal Graveddigers.

Explaining the reasoning behind their selections, Lovrić told The Calvert Journal:

‘Morrisey, Orwell and Strummer aren’t Partizan supporters but their work radiates the qualities of the club and its supporters. Orwell fought against fascism in the Spanish civil war alongside the club’s founders, Koča Popović and Peko Dapčević. Strummer worked as an undertaker and his poetry is fairly “gravedigger-esque”, as is Morrissey’s.’

Not all of the murals survived however since there have been a few instances of Red Star fans damaging them with the usual hastily scribbled messages of hate and anger. 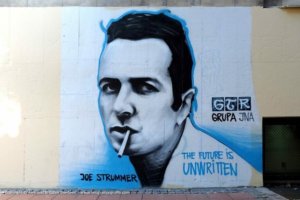 Inseparable allies and close associates of GTR are Group JNA, a punk-rock band from Belgrade solely dedicated to Partizan. Many of the group songs were written by Lovrić, while Group JNA helps with murals around the city. The group name itself comes from the former name of Partizan stadium, which used to be called JNA in the days of socialist Yugoslavia and it’s still called by that name today by many.

The group was formed in 2010, as a way to show love to the club, as well as a way to return the sound of punk on the terraces of JNA and among Gravediggers. Group JNA debuted with the song ‘Black and white scarf’, which was also featured on the first album that came out in 2013, and was followed by two more in the since. Most of their songs are remakes of already existing punk and rock hits, but some of them are original pieces of work.

‘The Chosen Ones’, a remake of ‘Another brick in the Wall’ by Pink Floyd

‘Only one Club in the whole World’, a remake of ‘Take ’Em All’ by Cock Sparrer

‘We are the only case in the world of a punk band that is completely devoted only to a sports club; all of ours 55 songs, 30 gigs and three albums are dedicated to Partizan’

Especially memorable was the gig held in 2013 at Partizan stadium, as a part of the celebration of the club’s 25th league title. Originally planned to be held only during half-time, the show didn’t stop when the second half kicked off, leading to what surely must be the only case of a professional football game played with a punk concert going on in the background. Group JNA also performed in National Theatre in Belgrade, as a part of the club’s 70th anniversary. They also had gigs during games of the Partizan Woman’s Basketball team.

More than 10 years after that first Lord Byron adaptation, Gravediggers Trash Romanticism continues to live on as a (counter) cultural movement of its own. Outgrowing its original creators, GTR now belongs to generations of Partizan fans who accepted it as a way of thinking about football, Partizan, art, and life. For them, Partizan and its black-and-white rollercoaster of events and emotions continue to be an inexhaustible source of inspiration.

In the artistic words of GTR:

‘Partizan is much more than sport. It is an aesthetic identification. It is like sunshine: beautiful and eternal.’

Home is where the heart is: the power of stadia (part two)