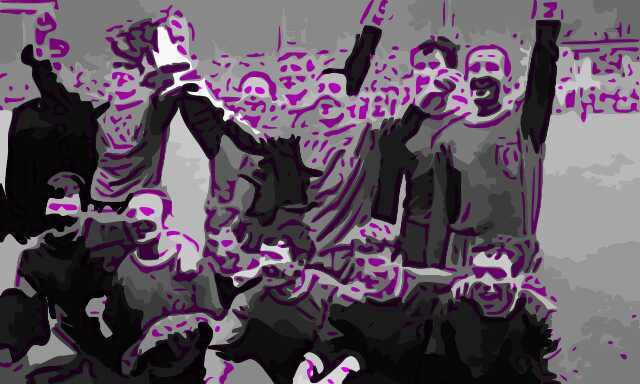 I remember them well. Actually, scratch that. I don’t – I wasn’t born yet – but such is the bubble of nostalgia that surrounds this particular epoch of history, together with the plethora of accompanying memorabilia, that one can almost fall prone to false memories (The Mandela Effect) and begin to place oneself at the very heartbeat of the period.

Bouncing back down to earth and reality, and attempting to look at the time from a neutral and dispassionate viewpoint, it is clear that the middle years of the decade in particular were an exciting and productive time for the nation and its national game.

In 1965, England was, of course preparing to host the following year’s World Cup and Alf Ramsey was already in the process of fine-tuning his squad. Included in his plans and thinking were players from clubs as diverse as Blackpool, Leicester City, Fulham, Manchester United, and Everton. Also coming into the reckoning were players from that season’s FA Cup finalists, Leeds United and Liverpool.

Since 1962, the country, in general, had been getting to grips with the four-headed monster from Liverpool collectively known as The Beatles while, in a footballing sense, the red half of Merseyside had been undergoing a metamorphosis in a similar time period under the inspirational leadership of the legendary Bill Shankly.

Lured to the club from Huddersfield Town in the dying days of December 1959, Shankly had taken Liverpool from the Second Division to promotion in spring 1962, and to the league title just two years later.

Now, as the 1964-65 season drew to a close, Liverpool were chasing the double-whammy of FA Cup and European Cup after what had been another exhilarating season for Shankly and his men. League champions in 1964, the title defence had never really got off the ground with eight defeats coming in the first fifteen games, leaving Liverpool in nineteenth position in the twenty-two team table, but a couple of decent runs in the course of the season had lifted the Anfield men up the table into what would be a final position of seventh.

Refusing to enter the newly-installed League Cup competition, Liverpool’s best hopes of honours in 1964-65 thus depended on progress in the FA and European Cups. The semi-finals of both competitions were reached courtesy of victories over West Bromwich Albion, Stockport County, Leicester City, Bolton Wanderers and KR Rekjavik, Anderlecht, and FC Koln. Waiting for Liverpool in the last four of each competition were Inter Milan and Chelsea, respectively.

Meanwhile, Leeds United, under their young manager Don Revie, were operating under a similar upward trajectory, which if anything was even steeper-inclined upwards. Promoted only the season before, Leeds were in hot pursuit of the league and FA Cup double. This was an ambition they were sharing with Manchester United and Chelsea in as all three clubs completed the line-up for the FA Cup semi-finals alongside Liverpool.

So, as the evenings started to draw out once again, with four sides all chasing a double, the scene was set for a dramatic climax to the season both domestically and abroad.

On March 27, 1965 Liverpool and Chelsea squared off at Villa Park, while Leeds United and Manchester United simultaneously kicked off at Hillsborough. Attempting to get an edge on Tommy Docherty’s young Chelsea side, Shankly showed his Liverpool team a ‘cup final’ brochure the West London side had supposedly produced in advance of their clash, telling his players Chelsea obviously felt progress to the Wembley showpiece was assured.

Although everyone connected with Chelsea denied any knowledge of production of the brochure at the time and subsequently, there is no doubting that the Liverpool team were especially motivated and they started the match on top. Despite their clear superiority over much of the first hour of the game, it was not until the 63rd minute that the Reds made the breakthrough courtesy of Peter Thompson. A Willie Stevenson penalty tucked away with a little over ten minutes remaining merely sealed the deal.

Meanwhile, a dirge-like match was being played out in Yorkshire. With defences on top in a bad-tempered match, it was to nobody’s surprise that the Hillsborough clash ended in a goalless stalemate. When the two sides met four days later at the City Ground, home of Nottingham Forest, matters were not much better as the sides headed into the 89th minute still scoreless. Fortunately, a late Billy Bremner header put everyone out of their misery and ended Manchester United’s double dreams while keeping Leeds’ alive.

After their victory over Chelsea, Liverpool did nothing more strenuous than prepare for their clashes with Leeds and Inter respectively through a series of dead-rubber league matches, while Leeds got on with the task of attempting to secure the league title. While Liverpool were half-heartedly winning just three of their final ten league games, Leeds found themselves in pole position to take the title when they found themselves a point clear of Chelsea and three ahead of Manchester United with five games remaining.

The season-defining match took place on 17th April when Leeds and Manchester United met in a repeat of their semi-final clash at Old Trafford. With a draw being of no particular use to the home side, United took the game to Leeds and after only 14 minutes winger John Connelly scored what was to prove to be the only goal of the game.

The following week, further disaster struck Leeds as they succumbed to a 3-0 scoreline against Sheffield Wednesday at Hillsborough, and although Wednesday were then defeated 2-0 the following day in the return at Elland Road, Leeds were now playing catch-up to United. Chelsea’s challenge, meanwhile, had more or less run out of steam and Docherty’s men were now outsiders.

A good 3-0 win at Sheffield United kept Leeds just about in the hunt, but when they fell three behind in their next game away to Birmingham City, the gig was pretty much up. A spirited fightback to earn a draw wasn’t enough to keep Leeds in the title hunt and barring a mathematical anomaly the title was bound for Old Trafford.

When that miracle didn’t come to fruition, Leeds therefore kicked off at Wembley knowing that the FA Cup was their only chance of having silverware to show for what had been a tremendous first season back in the top flight.

Leeds were made slight favourites with the bookies based on their season’s exploits, but the game was really too tight to call. The only thing known for certain was that there would be a new name on the cup with neither side having won it previously.

It was a grey and overcast North London afternoon with 100,000 packed into the Wembley stands as the sides kicked off on May 1. With the Beatles sitting pretty at number one in the charts with ‘Ticket to Ride’, Liverpool were looking to keep the city on the map, but to do so they had to overcome a Leeds side that had not only defeated Manchester United on the road to Wembley but also Southport, Everton, Shrewsbury and Crystal Palace.

The game was another attritional one as far as Leeds were concerned, and after just five minutes Liverpool’s Gerry Byrne broke his collarbone in a challenge with Leeds’ Bobby Collins. Having no substitutes in those days, Byrne was forced to carry on in agony. Liverpool were no shrinking violets though, and Bremner, Charlton and Storrie all required on-field treatment before the match had reached the 20-minute mark.

Leeds were trying to get their flowing football going, but with the sides matched tactically at 4-4-2, Liverpool were suffocating their attempts to play out from the back and slowly taking control of the match. Although there were no goals in a rather nondescript first half, Liverpool were arguably the better side and this chain of events was to continue in the second period.

Although Liverpool turned the screw in the second half, and Leeds appeared to be running on empty following a long and exhausting season, still the breakthrough wouldn’t come and so for the first time since 1947, extra time was required in the FA Cup Final.

Three minutes into the extra period and finally the deadlock was broken. When Byrne, heroically carrying on, managed to cross the ball for Roger Hunt to head home and give Liverpool the lead. The goal seemed to wake Leeds up and just three minutes later, Bremner equalised after a knock-down from Charlton gave him a perfect shooting opportunity.

The game continued to ebb and flow in the second period of extra-time, but with nine minutes remaining Ian St John scored what would prove to be the winning goal when he stooped to head an Ian Callaghan cross home past Gary Sprake in the Leeds goal. This time there was no coming back for Leeds and Liverpool had won the cup for the first time in their history, while Leeds ended up empty-handed with nothing tangible to show for a fantastic season.

As a footnote to the final the number 11 for Leeds that day was Albert Johanneson from South Africa, who became the first black man to play in a Wembley FA Cup Final. Unfortunately, heavy nerves and heavier tackling had a profound effect on Johanneson that day and by all accounts he turned in a shocking performance, was never the same player again, and saw his career and – tragically – his life spiral afterwards.

Four days after the Wembley success, Liverpool met and defeated Inter Milan 3-1 at a bouncing Anfield in the first leg of the European Cup semi-final. However, a contentious and controversial 3-0 defeat in Italy a week later put paid to Liverpool’s hopes of becoming the first English side to lift the trophy.