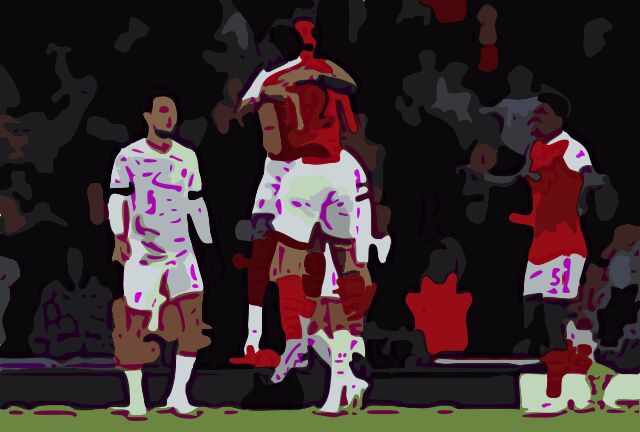 That was the time on the clock that I had to admit to myself that OK, Arsenal are not the same Arsenal.

Bukayo Saka, who could be forgiven if he never wanted to take a penalty again in his life, stepped up and slotted past Alisson and Arsenal led Liverpool again, this time 3-2.

He could have easily bottled it – many would have expected him to because of the shirt he was wearing. But he didn’t – and Arsenal showed, to me at least, that they have the stomach for a title run.

Don’t get me wrong – they won’t actually win it. Nobody is stopping Man City ever again by the looks of it. But Arsenal will finish second – maybe by less than eight points and everything.

Jurgeylad spent the week talking down the fact it was his seven-year anniversary at Anfield and he’s lasted a matter of weeks after that milestone in his previous two jobs. Before that, he’d spent ages reminding Trent Alexander-Arnold is actually a good player – LOOK AT HOW GOOD HE WAS AGAINST RANGERS FOR CRYING OUT LOUD – before hooking him at half-time at the Emirates.

Funnily enough, a midweek Champions League win over Scotland’s second or third-best team didn’t mean Liverpool are back at it. Their title challenge is over before the clocks change, now trailing Mikel Arteta’s side by 14 points. But it is more than that. They look lost.

There were moments against Arsenal, of course there were moments. But spells of utter domination no longer seem to be available to this team – next to be taken off after Trent was Mo. I mean, what does that say – losing against a team about to go back to the top of the table and you take off your best-paid player who has scored a literal shedload of goals for you and replace him with Fabinho? Is anybody in the Anfield boardroom regretting asking Salah to sign that new deal?

It was one of Arsenal’s Three Gabriels that got TAA removed after 45. Martinelli tormented and showed Liverpool fans what they might be missing since Sadio went to Bavaria. Gabby Jesus stuck another one in the eye of this sudden interest in the proper number nine (even if Darwin Nunez did finally move his goal tally marginally ahead of his red card tally).

It was Jesus who won Arsenal Saka’s penalty – Thiago not realising the Brazilian’s leg was there as he swung his foot in the general direction of the ball. Was it one? Applying my battle-weary “would it be a foul anywhere else on the pitch?” theory – yes, yes it was.

The Bodger and Badger defending right at the end with Virgil looking at Ali and Ali looking at Virgil as Jesus stole in to form the filling in their hopeless sandwich summed up perfectly where these two teams find themselves – one, shell-shocked and confused as to what has suddenly gone wrong (the answer is Fabinho, by the way). The other, full of belief and chasing everything down my dog who has just seen their mortal enemy, the cat.

All that is well and good, but like I said – none of it matters, really. Pep can still start making some room in the downstairs toilet for another Premier League trophy.

Southampton were the cannon fodder tasked with trying to stop Erling Haaland before that petition finally gets him banned from earning a Premier League living. And, in fairness, it looked like they’d cracked the code as Haaland actually missed his first chance of the game – hitting a post of all things you thought you’d probably not see this weekend.

Not that it mattered – City have one or two others that know where the goal is, giving Erling time to reconfigure his coding and get just the single goal in the second half.

City have broken some kind of record – winning multiple matches by scoring three plus for the first time since some time in the 60s. Admit it, you read this column for the nailed-down levels of statistics you get provided.

That might be the last we see of Ralph Hassenhuttl, equally it might not be. He didn’t seem too fussed about his future post-match, seemingly more proud of that fact that this is the first time in his 16-year management career he’s had questions about his future. He must mean since the last time he was nearly getting the boot from Southampton, possibly after the first 9-0 defeat or the second?

In fairness, Southampton didn’t play like a team that had given up on the manager so many players are alleged to want to see the back of. They ran and everything.

It took all of five minutes for Casemiro to make a difference to Man United on his Premier League debut. Just not the kind of difference you’d hope for, given the transfer fee. The ex-Real Madrid multiple Champions League winner got the ball, lost the ball and saw Alex Iwobi continue his transformation from utterly average wide man to dominant midfield powerhouse by curling it past De Gea. That Iwobi switch had to be inspired by Joelinton, no?

Antony showed the other side of United’s transfer window, equalising ten minutes later and breaking/equalling (I don’t know, it flashed up on the TV briefly) a record to do with scoring three goals in his first three games.

And, to be fair to Casemiro, he got the hang of this Premier League thing pretty quickly – robbing Iwobi in midfield to set Ronaldo off in the oldest foot race of the weekend against Seamus Coleman. Ronaldo won by a mile and still had the energy to slide it home – might Ten Hag, you know, pick him?

Tottenham went to Brighton off the back of a very tough seven days – their much-loved fitness coach Gian Piero Ventrone suddenly passing away in the week. It says something about a guy who made the players visibly chunder in preseason that there was so much genuine sadness and emotion at the Amex.

All of which made Spurs’ win even more impressive. Harry Kane got the winner, obvs, but it was a proper Conte win – ugly, ground out, full of running and just a little bit clinical.

Conte’s Premier League bete noir, Diego Costa, got the biggest cheer at Stamford Bridge on Saturday – when he was subbed on the hour having caused them zero problems whatsoever.

Chelsea were always in control against Wolves who really could be in trouble this season – especially if the answer to their problems is Julen Lopetegui. I mean, he’s not even Portuguese is he?

Graham Potter seems to be settling in – and his wardrobe has certainly benefitted from that signing-on fee.

Ethan Pinnock deservedly got the man-of-the-match award for Newcastle at St James’ Park – Brentford’s central defender has had better days. Miggy Almiron still has more goals than Wolves, adding to his tally in the 5-1 win – and Bruno Guimares is already being talked of as the best midfielder ever seen in the black and white stripes. David Batty will be gutted to hear that.

West Ham are slowly getting their house in order – they beat Fulham 3-1 thanks, in part, to their big in money, big in stature Italian striker Scamacca. He fell the right side of the VAR call to give the Hammers the lead knowing full well had the ref called his handball then it wasn’t getting overturned. It’s fair to say Fulham’s bench saw it differently.

Points have finally landed for the Eagles. It looked like Leeds were on for all three points at Selhurst Park before it was Eze-like Sunday morning (or afternoon, really).

Finally, whoever fancies the England job after Southgate leaves post-World Cup might want to think again. Their Euro 2024 qualifying group of Italy, Ukraine, North Macedonia and Malta looks a bit different to usual. Maybe tanking the Nations League wasn’t so smart after all?