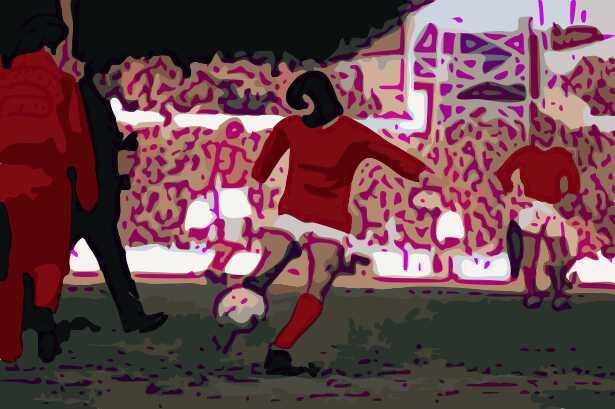 “George inspired me when I was young. He was flamboyant and exciting and able to inspire his team-mates. I actually think we were very similar players – dribblers who were able to create moments of magic” – Diego Maradona

Introduction to a Legend

My early memories of George Best as a young kid growing up in the late 1990s/ early 2000s were of a man who graced the TV every Saturday as a pundit on Gillette Soccer Saturday.

However, I never really knew at the time the true genius that was on the screen or what he meant to the footballing world. I would come to learn of how great he really was during a conversation with my father during a four hour car trip back up north.

I was very lucky to grow up in an era of the game that saw a plethora of greats all at the time playing for some of the biggest clubs in the world. Names like Ronaldo, Zidane, Figo, Beckham, Giggs, Ronaldinho, Del Piero, Maldini, Batistuta, Henry, Seedorf, Davids and Scholes, to name a few. To this day, these are players that are used as measuring sticks for every player that has followed them or who are considered future greats of the game.

To me and my friends, these players were the best the game had ever seen with the only exceptions to the rule being the two players I quoted at the start: Pelé and Diego Maradona. To the generations prior to mine, these were the two greatest to ever play the game, yet there was one man who even they looked upon in awe of.

Born on 22nd May 1946, George Best grew up in Belfast’s Cregagh Estate. He was spotted playing football nearby by a Manchester United scout named Bob Bishop, who went on to tell Sir Matt Busby “Boss, I think I’ve found you a genius!”.

Those famous words spoken by Bishop would be nothing short of the truth as, after overcoming initial bouts of homesickness, Best would make his professional debut at 17 and go on to score 179 in 470 appearances during 10 years with Manchester United.

The Showman on the Stage

Though these statistics don’t seem to jump out at people or compare to records of such players like Pelé or Maradona, it is the way Best played the game that has lived with those fortunate to see him play either live or on TV.

Memorable goals would be commonplace throughout Best’s career, with goals like the one against Chelsea in 1970, or his lob into the top corner against Tottenham, to name just a few. Other dazzling displays like his six goals against Northampton in the FA Cup and his two goals in the 1968 European Cup final victory against Benfica are just a couple more instances that show the true genius of the man.

“I noticed that when I touched the ball on the field, you could hear this shrill noise in the crowd with all the birds screaming like at a Beatles concert.” – George Best

Best’s ability to make the beautiful game look so easy by weaving in and out of opposition players like training cones, and producing moments of magic saw him crowed as one of the Holy Trinity by United supporters, alongside Bobby Charlton and Dennis Law.

With United, Best won two league titles, two Charity Shields, and a European Cup, as well as the Ballon D’ Or. His popularity was incredibly high, both domestically and overseas, with Portuguese reporters dubbing Best ‘El Beatle’ in 1966, due to his Beatles haircut and the dazzling display he produced against Benfica in Lisbon.

Though his club career with Manchester United would prove to be a successful one, it would be with his beloved Northern Ireland where Best would fall short.

“The people of Northern Ireland have sorted out my whole life.” – George Best

Best’s record with Northern Ireland would see him score just 9 goals in 37 appearances, but it must be remembered that during Best’s time with his country the opposition was mainly England, Scotland and Wales in the British Home Championships.

Still, even with limited fixtures to play in, Best still showcased his genius on the pitch and made many memorable moments for the Northern Ireland fans, one of which would go down as his most famous moment. This would come against England in May 1971, when Best stopped Gordon Banks’ kick downfield, knocked the ball back over the goalkeeper as it left his hand before slotting the ball into the back of the net.

This moment may seem to make people scratch their heads at how it could be Best’s most famous moment for Northern Ireland, but what it shows is how Best was the ultimate entertainer on the football pitch and produced unforgettable moments that fans of both clubs he played for and against are still talking about to this day.

“When it all went wrong with football, the thing I loved most of all, and from there, my life slowly fell apart.” – George Best

After leaving Manchester United in January 1974, Best would try to fall back in the love with the game he cared about so deeply with short spells at Stockport County, Jewish Guild in South Africa, Cork Celtic, Los Angeles Aztec, Fulham, Fort Lauderdale Strikers and San Jose Earthquakes.

It would be with the Earthquakes that Best would score a goal that many who have witnessed it would call the best of all time. It saw him weave in and out of 5 players before smashing the ball into the top left corner of the net.

The passion would never return to Best the way it was back during his playing days at United, with the closest comparison being his season at Fulham playing alongside friend Rodney Marsh. Off the field antics and further addiction to alcohol and womanising would stand in the way of Best’s career in football but as the great man once said:

“As long as I stay in training and play well, I don’t see what objection there can be to what I do off the field.”- George Best

Best was right, his ability to still entertain the fans that adored him meant that he was a man who could put his personal life to one side for his unrivalled love for the game.

George Best would retire at the age of 37 in 1983, a career which saw him play for 10 teams in the decade after he left his beloved Manchester United, and would sadly pass away at the age of 59 in 20 after battling alcoholism his whole life.

There is a reason why I have only touched on the troubles that he faced in his private life off the field during this piece, as this is because many instantly think of this when they hear the name George Best.

Instead, I have decided to shine a light on the man that for many, including those considered the greatest players of all time, call him the greatest footballer to ever grace the pitch. To me, a man who was born 9 years after his retirement, Best is a player that was the idol of my father and many of his generation, simply because of the genius that they saw on the pitch. A once in a lifetime player who will never be replicated.

Throughout the years since that conversation with my father as a young boy, I have watched what little videos and clips there are of the genius at work, and even I am taken aback by the sheer talent he had.

It makes me sad, not only as a United fan but as a football fan, that his name is not mentioned in the pantheon of greats as often as it should be. If many more knew about Best, then many United fans would not have voted Eric Cantona the greatest United player of all time. Maybe, many football fans around the world would not be having a discussion about Lionel Messi and Cristiano Ronaldo in terms of how they play the game and who is the greatest.

It cannot be denied that Best’s private life off the field did contribute to his short career at the very top, as even he himself in interviews said he would’ve loved ten more years. However, it is forgotten that there are fans out there who got to witness a genius at work and there are generations after, like myself, that still seek out the moments that inspired so many greats of the game to follow in his footsteps.

“George Best was one of the most talented players of all time and probably the best footballer who never made it to a major world final.” – Franz Beckenbauer

“They’ll forget all the rubbish when I’ve gone, and they’ll remember the football. If only one person thinks I’m the best player in the world, that’s good enough for me. Pelé called me the greatest footballer in the world. That is the ultimate salute to my life.” – George Best