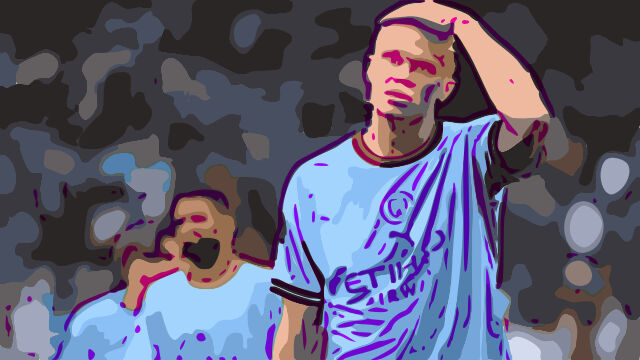 After 35 minutes, an interesting stat flashed up on my screen. Erling Haaland was on track to score 65 goals for Manchester City this season. Just take a moment to let that settle in. 65 goals. By full-time, it was 66.

How so? Because after 35 minutes against Man United he had scored twice and City led 3-0. By the end, he had three and City had won 6-3.

If you add up the total distance of Haaland’s goals this season, it probably only comes to about 18 yards such is his ability to apply the finishing touch in the area. Everyone thought he might batter United’s Martinez into submission – but it was Rafa Varane who went off “injured” before half time having realised the bench was probably the best place to try and stop the Norweigan from.

United had been a bit better before the international break but even the most blind of fans will have recognised getting a result at the Ethihad was likely to be one step beyond them. And so it was.

United fans started streaming out of the ground before half-time, which seemed bizarre. Yes, City were 4-0 up by that point but this wasn’t a Man United performance lacking in effort or desire. It wasn’t addled by attitude problems. They were just being cut to shreds by a much, much better side. Games like that, teams need their fans – unless, of course, they knew of a cheaper pint outside the ground in which case, fair dos.

Haaland didn’t stop there – netting his third consecutive home hat-trick in a row and scoring the first Manc Derby treble since Franny Lee back in 1970. And like the proverbial London buses, you wait 52 years for a derby hat-trick and then two come along at once – Foden getting City’s sixth. United won the second half though, right?

So, if Thomas Partey is banging them in like that from 30 yards after a 21 pass move then maybe Arsenal are in a title race. And Xhaka scoring, revelling in this new box to box midfield role? And if Gabby Jesus is scoring the scrappy ones, wait a minute. That sounds like all kinds of goals from all kinds of players. Yikes. Arsenal might actually be quite good

Harry Kane scored because it was a London derby but it never looked like it was in doubt for Arsenal really. Even before that red card. Was it a red? Antonio Conte clearly didn’t think so refusing to mention Anthony Taylor personally, before going on to talk about Premier League refereeing being a bit rubbish in general – as if nothing at all had prompted that thought process. Oh, Kane’s goal made him the first player to score 100 away Premier League goals, apparently.

Emerson Royal has been an accident waiting to happen since he arrived – Spurs fans must have hoped they’d got a less stupid option since he replaced Serge Aurier who was, frankly, nuts.

Arsenal for the title? Well, if by the title we mean second place, then maybe. They’re good right now, but they are not City.

The value of Liverpool’s title campaign is sinking faster than the British pound. Leonardo Trossard was probably hanging out to have something in common with Andrei Arshavin and now he does – a Premier League hat-trick away at Anfield.

Welcome, Roberto De Zerbi – yes, it is often like this. Brighton were a clever, intricate side under Graham Potter and when their new manager said he wasn’t planning to change much at first he was not lying. Brighton outplayed and out-thought King Kloppo’s side at every turn in the early stages – racing into a 2-0 lead as the heavy metal mentality monster machine coughed and spluttered once again. Klopp’s style of pressing and playing is so precise that it only takes something to be marginally off and it falls apart – remember them pre-Fabinho? It’s just like that again which is ironic, as they appear to be a team without Fabinho once again given how the Brazilian’s form has also tanked like the economy.

But, Liverpool did fight back to lead 3-2 thanks to Bobby Firmino wishing himself a very happy birthday – it’s just that Trossard fancied being the party pooper and left with one of the many match balls on show.

Thiago Silva is a lucky boy, isn’t he? Having seen the new boss put his 38-year-old legs into a defensive duo, it is no wonder that Silva struggled against the pace and movement of the Crystal Palace attack. He’s used to having a couple of younger lads to do his running for him – and to make it worse, the young lad he was given on Saturday was Wesley Fofana who seems to have brought his concrete boots down from Leicester.

Silva fell over inside his own half and stopped the ball not once, but twice with his hands preventing Palace racing through on goal. Was it denying a clear goalscoring opportunity? Probably. Once it was given as a yellow, was it a clear and obvious error? Probably not. If the manager who saw the decision go their way comes out and says, “yeah, I can see why Patrick might be upset. It’s 50-50” you know Graham Potter is thinking they’ve got away with one there.

As for Chelsea, a 2-1 win at Selhurst Park with Yo-Pierre remembering what it’s like to score in the Premier League and Conor Gallagher doing what you knew he was going to do after being politely applauded on to the field bodes very well indeed. They dominated the ball (standard Potter fare that) and struggled to convert chances (equally standard Potter fare) but having that extra bit of class that he may not have had available to him at Brighton meant the three points went back to the Bridge.

The Wolves board grew too tired of the tripe being served up by Bruno Lage. They got done over 2-0 by an average West Ham performance which meant the Moysiah could enjoy the Sunday papers outside the relegation zone and Lage would have had a stressful continental knowing his side were in the bottom three and his job was very much on the line.

Wolves invested over £100m in the summer and, understandably, want a little more from their money so are no doubt lining up the next Portuguese manager to sit in the dugout. I think Lage came from Benfica, so let’s assume they’ll tap up Sporting or Porto this time. Either way, that pint of Lage went a bit flat a bit too quickly.

Ralf Hassenhuttl – does anyone know what he was wearing in Southampton’s defeat to Everton? I am looking to compile some data on whether they win more games when he is in that suit or when he is in a tracksuit. Or whether it makes no difference at all and Southampton have the ability to lose any match at any time.

The Ev came back from a goal down away from home to take three points – careful, people might start thinking Frank Lampard knows what he is doing.

Leeds and Aston Villa didn’t fancy putting on a show for the cameras in Sunday’s second game – City and United must have used up the entertainment quota.

Referees and VAR get a lot of stick, especially in this column – so it is only fair that one who sticks to his guns over what VAR suggests gets a standing ovation. Thomas Bramall, taking charge of only his second Premier League game, was clearly working to the strategy of “I’ll be back in the Championship next week, so I am doing this my way”. Brentford’s Ajer bundled into Bournemouth’s Zemura. Bramall waved play on, VAR said he might want to have another look. Usually at this point, the ref believes he made a mistake and changes his mind. Not Bramall, oh no. He had a look, decided he was bang on and got on with it. So much time for that stance.

He also turned down a deep-into-injury-time shout and blew up for full-time. VAR had probably knocked off by then as they didn’t even take a look.