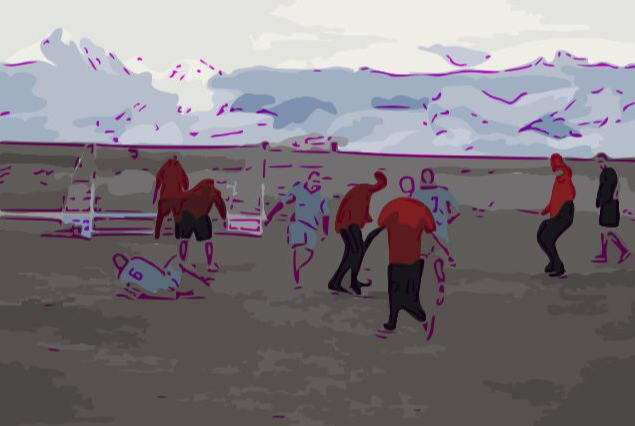 Football is one of the most accessible sports in the world. All you need is jumpers for goalposts and a round object for a ball. It is one of the few sports that have travelled to every continent – even Antarctica.

For most of us, our first encounter with such possibilities was through David Backham’s 2016 documentary that looked at playing a football match in every continent over ten days, discovering the impact it has on communities across the globe. In the case of the southernmost continent, the narrative contended that no football game had ever been recorded in the subzero temperatures.

After all, Antarctica is populated by no more than 3000 people, with most inhabitants being scientists and civilian staff billeted in research stations dotted around the 13.66 million kilometre surface area. However, there is evidence out there which suggests that the history of football in Antarctica is over a century-long.

From exploration years to the development of a North Antarctica international football team, this article will provide an overview of the history of our beloved sport in a continent that many would assume to be too cold to exist.

The earliest written record of football played in Antarctica was during the British National Antarctic Expedition, more commonly known as the Discovery Expedition, which set sail from London in 1902.

In several extracts, it has been told that sporting activities like football, tobogganing, and skiing were ingrained into the daily routines of those who went about exploring an untouched terrain to keep them occupied.

Two years later, a much-less documented expedition from Scotland, led by William Speirs Bruce, also recorded football matches in the early years of the continent’s exploration. The Scotia made two voyages to Antarctica, discovering Coats Land, found at the eastern end of the Weddell Sea. Those involved with the expedition became hemmed in during the winter because of pack ice.

As always the case, the crew found ways to keep their spirits up.

Around March 9 1904, Bruce organised the crew’s first football match on ice. And in the same year, the first pictorial record of such an event appeared – a photograph on the Scott Polar Research Institute website, dating from during the Antarctic Relief Expeditions (1902-04), entitled “Football match between Mornings and ‘Terra Novas.’ 18 miles from Discovery.”

During the Terra Nova Expedition from 1910-1913, in Captain Robert Falcon Scott’s diary, he mentions some excerpts from football/soccer practice, “Today I had our first football game; a violent south wind started blowing, which helped my own side with three goals.”

The notion that the history of football in Antarctica is recent is further questioned in the same diary, which says: “We play football at noon – the game gets better as we improve our conditions and skills in football” on May 19, 1911. It is possible to observe that sport was an entertainment activity, and because of the climatic situation, it was necessary to take a break. “there is little to lure someone out of the house … However, we are only nine days out of the” light value “of the day we left football – I hope we can start the game again in that period.” June 17, 1911.

Another record of football in Antarctica was made by Ernest Shackleton during the 1914 Imperial Trans-Antarctic expedition. On January 5, 1915, there was another match for entertainment, but it was necessary to be stopped after Captain Frank Worsley had an accident.

Shackleton wrote in his “South!” about the incident: “The weather was clear, and some enthusiastic football players had a game on the floe until, about midnight, Worsley dropped through a hole in rotten ice while retrieving the ball. He had to be retrieved himself.”

Of course, football in such conditions will always spawn treachery, and there is no explanation as to how the sport was played, but one can only assume that boots that were made with spikes on them to combat the slippy ice were worn.

Ernest Shackleton’s expedition also brought about arguably the most famous photographic evidence that football was played in Antarctica. Titled “Eleven-a-side”, the photo was taken by famed Australian photographer Frank Hurley, whose collection went on to feature in an exhibition at the Ralls Collection Gallery in Washington, DC, in 2012 entitled “The Photographs of Frank Hurley.”

The same photographer would later host numerous lectures-cum-exhibitions entitled “In The Grip Of The Polar Pack Ice” around his native country between 1918 and 1919, and in one of his segments, called “Antarctic Football”, he documented a midwinter football match between the crew and the scientists sailing on the Endurance.

Although many are unaware of the long-standing history of football in Antarctica, those who were/are in attendance of these matches come away in awe of it. While today’s kids speak of playing the sport in the rain, explorers of old spoke of playing in the dead of winter in Earth’s coldest conditions.

Until the 1940s, football in Antarctica was restricted to a pastime; it was no more than just a group of two sets of explorers, researchers, and civilian staff that played one-off matches for enjoyment.

Although not a part of Antarctica as such, South Georgia, a British dependency located on an island just offshore from the southernmost continent became integral to the history of the sport in those parts during the 40s. It was on the South American-claimed island where the first indication of actual teams was recorded.

Uruguayan Eduardo Triunfo was one of those who worked at the various whaling stations on the island and recalled competitive football matches in the region in his diary. He reported that he played “picados” as football/soccer was called, starting at 10:00 p.m. when it was daytime in Grytviken. He was the captain of his team. The opposing teams were formed by the Norwegian whale hunting crew as ‘Don Miles’, ‘Foca’, ‘Horca’, ‘Walrus’ and ‘Narval’. Eduardo Triunfo said that he won all the matches and only lost to the Queen of Bermuda (UK) that had just arrived at the site.

In 1948, at Ensenada Martel on King George island, there was a deactivated British base called Station G. Argentina tried to take possession of that base – but the British defended it, causing a diplomatic crisis between the countries. So the US Department of State suggested a football match between Argentine and British sailors to resolve the political crisis.

The moment demonstrated that football played a more important role in the Antarctic region in the 1940s. While teams were erected, the sport was also deployed as a peacemaker between countries, just like its purpose during the world wars.

As you’d imagine, most of Antarctica’s football is played in the northernmost reaches where the weather is slightly warmer than the rest of the continent. According to Lonely Planet, the Argentine scientific base of Esperanza, built in 1951 at Hope Bay, is of particular significance as it features football pitches in hangars and under shelters.

In 1971, 20 years after its inception, Esperanza hosted the first-ever international tournament in Antarctica. The matches were played between teams of six people, and in the most notable fixture, Esperanza beat the Chilean Bernardo O’Higgins Base in May in a 7-3 thriller. It was also the first match to be played between two Antarctic bases.

What was claimed by the journal of the Chilean Air Force to be “the world’s southernmost international football match” took place at the Chilean-run Teniente Marsh Air Base on 19 January 1986, between a team from Marsh and another representing Uruguay’s Artigas Base, situated a couple of miles down the road. The match was refereed by a member of the Chilean Navy, Rolando Carvallo, and the final score was 2-2. The journal listed the teams in the following order:

The sport was evolving at alarming rates in subzero temperatures. By 1988, there was a made-up World Cup between the various bases in Antarctica called the ‘Inter-Bases Championship’. Hosted by the Uruguayan base of Artigas, it involved personnel from the host base, as well as representatives from Frei (Chile), Bellingshausen (Soviet Union) and Great Wall (PRC) bases. The Uruguayans went on to win the tournament. Unfortunately, no record of any results from the tournament appears to exist.

From the period between 1988 and 2011, football was still a predominant part of leisure in research centres across the continent – but as far as researching the topic went, nothing could be found of significance when comparing and contrasting what happened in the evolution of the sport beforehand.

In 2011, however, there was the first foundation of an unofficial Antarctic football club after North Antarctica’s Micrasian (Fictional land holdings) claim was successful. In a peculiar setup that I’m still confused about myself, North Antarctica competed in their first-ever tournament via the entry of the Four Nations Internationals, which consisted of themselves, Zealandia, Safiria, and Mercury – whom they lost 4-3 to in the two-legged final.

Effectively, the existence of the North Antarctica national football team belonged in the bizarre circumstances of tournaments made between micronations whose land holdings are up for debate.

In the 2012 FMF World Cup qualifying, the team finished second in their four-team group with 11 points, behind Novatainia and above Babkha on goal difference, to reach the inaugural Copa Apollonia, which North Antarctica won the rights to host. Soon afterwards, the team competed in the inaugural Zeeburg Tournaments, where they finished fifth on goal difference with ten points. Later in the year, the team competed in the Copa Apollonia, advancing from their group before losing to Mahoz HaSephardim in the semi-final and being beaten by Hurmu, in extra time, in the third-place play-off.

The team continued to play in tournaments until North Antarctica was annexed in 2014 by Haifa. Although it kept its FMF membership for a short time, reaching its second World Cup finals stage by topping its group with 25 points, before a second annexation, this time by Mercury in early 2015, forced the team to switch its allegiance to the CTFA Confederation.

In North Antarctica’s short but impactful duration, their biggest victory was a 7-0 win over Lucerne, but, for the most part, the team struggled after qualifying rounds in each of their tournaments, eventually being succeeded by Castilona in 2020.

The rise and fall of football in Antarctica is weird and wonderful. While it is fascinating to understand that explorers would play in subzero temperatures to keep themselves sane in the early 1900s, the history of the sport took a peculiar twist on its course to the modern day as it fell into a wormhole of micronations that I didn’t even know existed.

Yabloko, Relaram, Alexandria, Walker Democracy, A1, among many others – it’s safe to say I’ll be avoiding further research into a section of the globe that is almost completely uncharted.

Nonetheless, David Beckham’s 2016 documentary fails to acknowledge Antarctica’s longstanding history in football. From the exploration years to the pursuit of the higher echelons of the sport in a competitive perspective, the southernmost reaches of our planet have had their fair share of thrills and spills.

Thankfully, it seems that Antarctica is happy, nowadays, to settle for non-competitive football in pitches in hangars and made on the ice, rather than fierce encounters with a team that sounds better suited to life on Mars.