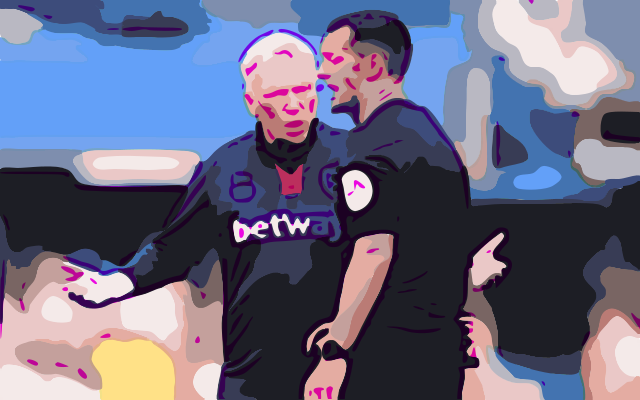 At this point, it’s probably worth making it clear I like my VAR the same way I like my 1920s movie actors – seen and not heard.

Has any other Premier League weekend been so dominated by attention-seeking do-gooders hiding in an office somewhere, trying to find work to do?

We saw a heist on the Hammers. We had Newcastle neutered. The Gunners were gobsmacked. Spurs were stitched up. Mac Allister was properly Macked off and Lampard was luckless. All because of VAR sticking their nose in – and we still do not have universal agreement on whether it is V-A-R or VAR (like car). Until that is sorted, it should get in the bin.

Personally, and allow me to make a serious suggestion for a moment, I’d adopt a cricket-style appeal system with immediate effect. The team that feels wronged gets ten seconds for the captain to ask for a review – if they don’t, tough. Two reviews per team, keep it if you are right and lose it if you are wrong. And there would also be a small margin for error that would be “referee’s call” – perfect for the toenail offside goals that get disallowed.

Anyway, shall we get back to mocking the things that need to be mocked?

Steven Gerrard needed something out of the visit of Man City – remember when people were worried that it was ‘unfair’ on Villa to take him considering he’d be off to Anfield at the earliest opportunity? A very, very dull start to their season means questions are being asked about Stevie G’s actual managerial ability – so stopping Erling Haaland from scoring his third hat-trick in a row and keeping him down to just one goal has to count for something.

Haaland can now be talked of in the same breath as Micky Quinn – the only other Premier League striker in history to score 10 goals in his first six matches.

The referee was a bit quick on the whistle after Villa had equalised – Philippe Coutinho had the ball in the net but was flagged for offside in the build-up when he might not have been. I mean, where’s VAR when you actually need it? City were not 100% on it, which is easy to say when they’ve failed to beat a Villa side that look more and more like being the next Everton (and by that I mean a ‘big’ club with no idea how to spend all that money) with each passing week.

As we know, it’s one thing battering Bournemouth 9-0 and getting someone the sack. It’s a different thing scoring a retro-style last-minute winner against Newcastle. It’s another thing completely failing to beat Everton in the derby – and the 0-0 draw makes the decision to let Divock Origi leave the club look very foolish indeed.

In truth, it was a terrible game of football which suited Everton down to the ground. They even had the ball in the back of the net, Conor Coady clearly answering the ‘will he celebrate against his old club?’ poser turning in Maupay’s misplaced shot (the first of many in a blue shirt, be assured). Unfortunately for Coady, VAR called him offside and Jordan Pickford reminded people why he still is England’s number one.

Frank felt Virgil should have seen red – he was probably right. VAR probably didn’t bother looking and just went with the global narrative that Van Dijk is still the best defender in the world and never, ever makes a mistake. On another note, is Mo Salah suffering Yo-Pierre syndrome? Get the big contract and then disappear off the face of the Earth as a player?

Arsenal’s title challenge lasted longer than expected, to be fair. And if their opening goal had been allowed to stand – hi VAR, how are you? – then the game might have gone differently. Instead, we had a big-money Old Trafford signing making an instant impact and Marcus Rashford actually looking like a decent player again. Crazy.

United won 3-1 and deserved it. Maybe they can push for 7th place after all.

You know what? I think the Moysiah might have had a point. Unless Jarrod Bowen was concealing razor blades in his boot laces, there is no way on Earth that Mendy got that hurt.

I won’t repeat my view on VAR again, but it’s embarrassing the ref got called to the monitor. However, it’s even more embarrassing he then changed his mind having seen it back.

Chelsea just feel like they are getting worse and worse and worse. They’ve just had the biggest transfer window in football history but you just know Tuchel will be gone before this time next season. It was hardly the most convincing way to get back on the horse having lost to Southampton in midweek and having learned how to spend a lot of money on players, Todd Boehly’s next Premier League lesson could well be on how to sack a manager.

Tottenham are becoming grinders and that means they’ve got a chance of getting somewhere. A gnarly midweek draw with West Ham was followed by a fighting 2-1 win over Fulham and Big Mitro (who scored, again).

Following his ball-juggling antics against Forest, seeing Richarlison strip off after scoring what he thought was his first Spurs goal only for VAR to rule it out was fun – but that was after Harry Kane levelled Thierry Henry’s London derby goalscoring record of 43. Heung-Min Son watch reports that he was slightly less anonymous than so far this season.

Jesse Marsch is an emotional chap, we are starting to understand. In a week of hat-tricks, none were better than Ivan Toney’s for Brentford against Leeds. Something irked Leeds’ American manager, as he was sent to the stands – but he was on the touchline long enough to get the perfect view of Toney’s stunning treble.

The first was the kind of spot-kick that explains why Thomas Frank says he should be picked for England even if it is only for that reason. The second, a free-kick into the top corner. The third, well if Mr Haaland himself had scored it then social media would still be recovering now – Meslier went walk about and the ball fell to Toney with the keeper way out of his goal. He still had to go past two or three, look up and then chip two defenders from distance to take advantage. If you’ve not seen it, you wasted your weekend.

Wolves finally won a game of football. The 13th time is a charm, they say. People get sacked for less, so Bruno Lage will be happy to have three points and some new expensive players at his disposal. Ralph Hassenhuttl will still be trying to work out how Southampton failed to win.

Newcastle drew with Crystal Palace – a goal got ruled out for something by those chaps watching the video. They were wrong, but we’ve come to accept that as we reach the end of today’s column.

And, that one being chalked off had nothing on Brighton’s Mac Allister seeing his sweet-oh-so-sweet strike being scrubbed in their 5-2 win over Leicester. Had it stood, then the Argentine would have an even better hat-trick than Toney – maybe. Not one Leicester player appealed for the offside that ended up being given – mind you, they are still shell shocked at suddenly being the worst team in the league.

Nottingham Forest signed 50 players in the window and Steve Cooper should have parked all of them in front of their goal after they went 2-0 up against Bournemouth. The managerless Cherries came back to win 3-2, opening the door for the board to take another cheap option and give the job to caretaker Gary O’Neil permanently.

Oh, and the transfer window slammed shut because transfer windows refuse to be closed any other way. Lots of teams spent a lot of money – much of it literally thrown against the wall in the way the old saying goes. Against the European Super League but a fan of the Premier League? You might want to dig into that a little bit…