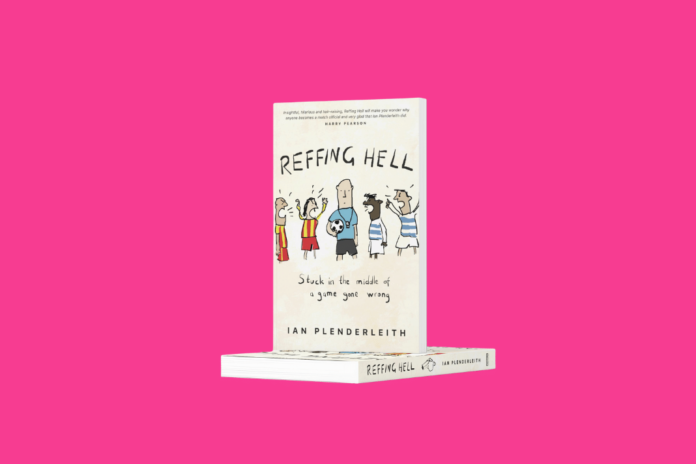 “Insightful, hilarious and hair-raising, Reffing Hell will make you wonder why anyone becomes a match official and very glad that Ian Plenderleith did” Harry Pearson

YOU’RE A SH*T REF AND YOU
SHOULD F*CK OFF BACK TO ENGLAND!

For the best part of a decade, writer and journalist Ian Plenderleith has been refereeing amateur football in the German city of Frankfurt am Main. Through parental mass brawls, on-field fistfights, choleric coaches and foul-mouthed threats, he endures a never-ending lack of respect and sportsmanship, pocked with flashes of humour and even half-decent behaviour.

This book tells you what’s going on in a referee’s head. Is he scared? Sometimes. Is he depressed? Only every second Sunday. Is he biased? Of course not. Does he feel a warm glow when the belligerent, moaning striker fires wide from six yards out? In short, he certainly does, and it’s often enough to make him want to show up again next weekend.

Yet no matter how poor the players and the leagues they grace, every single game tells its own story about the teams that play for fun, but never seem to be having any. About the average, the bad, the ugly, the hopeless and the sporadically unhinged. And how over the course of 90 fraught minutes, rage, deceit, scorn or even a spontaneous wave of hate- shattering laughter are never more than a blast of the whistle away.

Enjoy the extract from Ian’s book below…

Friendly kick to the shins

We’re just about to kick off when I notice that at least half of the home team are not wearing shin-guards. I turn around and look at the away team. Same thing. No, it’s not an under-7s game. These are all adult men. Though sometimes it’s hard to tell the difference.

Everyone’s ready to go, it’s very hot, and it’s only a friendly. I hadn’t bothered checking the players’ equipment because, for adult games, everyone usually knows the rules. So I point out the all-round lack of leg protection. “Ah, come on,” says one player. “We all know each other. It’s going to be very laid back.” With an uneasy feeling, I start the game.

Ten minutes later I stop it again, and order all the players who don’t have shin-guards to put them on. The tackles are going in thick and hard. This is about as laid back as Jürgen Klopp barefoot on a hot tin roof. One player has already limped off with an ankle injury. I picture a health insurance company suing me on behalf of its client and his triple shin fracture, while my refereeing association will wonder why on earth I overlooked such a basic law. I will be banished for five years to the pre- adolescent leagues, kicking off on Sundays at 8am.

Most of the players without shin-guards just stand and stare at me. A few are annoyed that I’m delaying the game and urge me just to play on. One player yells at me. I ignore him and instead send the manager of the home side off to the changing room to grab as many shin-guards as he can find. He’s a nice bloke, but very chaotic.

He returns with a sack of extra equipment. The away team’s been standing around like the directive doesn’t affect them, so I send them one by one to the bench to grab any spare shin-guards going among the substitutes. Every single player on the pitch thinks I’m a wanker for enforcing this.

As though I’d expressly told them before the game not to wear shin-guards, and now I’d changed my mind just for the hell of it.

Finally, we start again. Someone asks about injury time, which would probably be around seven minutes, but no one complains when I blow for half-time on the dot at 45 minutes — they’re all too knackered and out of shape from doing fuck all over the summer.

In the second half, they get cranky. Teams can turn extra dirty after the break. Either they’ve been bollocked at half-time for not being aggressive enough, or they’re pissed off at missing their afternoon naps. There’s some pushing, threats and half-hearted squaring up, so I get the captains to substitute the worst perpetrators because I can’t be arsed to card anyone in a meaningless game. Besides, they’re all friends, right? The away goalkeeper then has a bust-up with an opposing forward, and again I step in. “He insulted my mother!” the keeper shouts at me in self-mitigation. The accusation of lost virtue among players’ mums is a recurring theme in football games at all levels in this city.

Despite all this, I’m in a serene mood, unfazed by fights, fouls or fractiousness. After the game, the nice team manager thanks me some more. We talk about the shin-guard thing. “Well, they have to learn some time,” he says cheerfully, as though they were all playing their first game ever, and he bears no responsibility for the situation at all. Nothing stops this bloke from smiling, not even his team getting soundly beaten. If only everyone at a friendly was this friendly.

Ian Plenderleith is a freelance journalist and writer who grew up in Lincolnshire and now lives in Frankfurt am Main.

He’s been a regular contributor to When Saturday Comes magazine for 30 years, and writes a weekly opinion column for Soccer America.

His previous books include For Whom the Ball Rolls (fiction), Rock n Roll Soccer: The Short Life and Fast Times of the North American Soccer League (self-explanatory), and The Quiet Fan (kind of a memoir).

His blog, Referee Tales, has morphed into this new book, in which he attempts to answer the question: “Why in the name of all that’s holy would anyone spend their free time refereeing amateur football?”.

And, of course, you can get the book below!

Book review- ‘How to Win the World Cup’: Secrets and Insights from International Football’s Top Managers