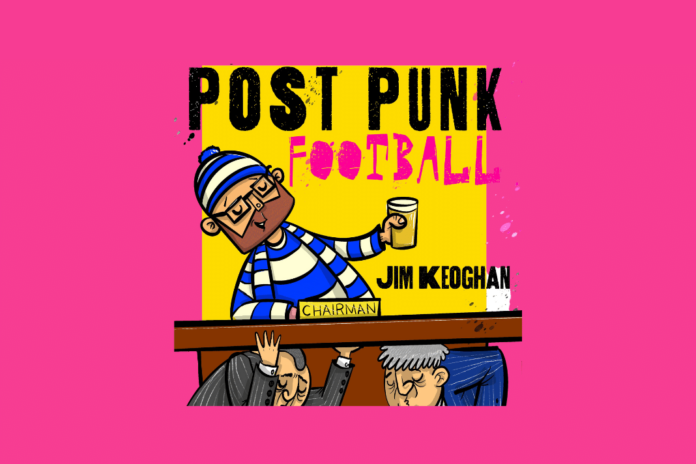 For a number of years now there has been a growing disdain towards post-1992, Premier League Sky TV football. Many supporters have grown disillusioned with the game and its gentrification, financialisaton, and the massive risk-taking in pursuit of a place in English football’s top flight and the riches on offer there.

This has given rise to owners such as the Glazers at Manchester United, whose financial wizardry has seen the club loaded with debt and paying for the Glazers’ acquisition.

And further down the food chain, we’ve seen rogue owners emerge throughout the lower leagues who believed that acquiring a football club would be the route to personal enrichment. This has seen clubs such as Bury and Macclesfield Town destroyed, and the likes of Derby County and Oldham Athletic on the brink of extinction.

But there has been a fightback of sorts, in what Jim Keoghan memorably describes as ‘Post-Punk Football’ in his new book, in which he talks about how football can be done differently and tells the story of some of those that have done it.

The fightback began in the early Noughties in the wake of the first high-profile casualty of the big money era of English football. The odious Sam Hammam had gutted Wimbledon, leaving them with virtually no assets beyond the first team squad, and saddled with debt. Somehow, Hammam managed to convince a few Norwegian businessmen to buy the club, but very quickly found themselves in a real mess, the conclusion of which saw them acquiesce to a proposal from Pete Winkelman’s Stadium MK Consortium to take the club north to Milton Keynes. Despite the protests of the club’s support who were backed by the wider footballing community, the move was given the green light by the authorities.

But the response from Wimbledon’s support was something else. They refused to go quietly into the night and instead formed the Dons Trust and launched a new club, AFC Wimbledon, starting all over again in the ninth tier of English football. By 2011, the club had been promoted to the Football League becoming the first club to be formed in the 21st Century to do so.

A few years later, another new club was formed, this time in response to the Glazers’ highly controversial takeover of Manchester United. This wasn’t the only issue that led to the formation of FC United of Manchester – supporters had long been disillusioned by the corporatisation of the club, heavy-handed stewarding, and the attempted takeover by BskyB – but it was certainly the trigger. Led by now General Manager Andy Walsh with support from influential fanzines Red Issue and United We Stand, the club was formed in 2005 as an Industrial and Provident Society, the idea being to build not just a club that was democratically owned, but also served the community in which it was based. FC United has around 2,500 members and is one of the best-supported clubs outside the Football League, and in its short history, has built a brand new 4,400-capacity stadium – Broadhurst Park, which is used every day by local people for a whole range of matters – and on the pitch have reached the National League.

This Post-Punk ethic has spread, with supporter involvement reviving Exeter City and building Bury AFC following the demise of the Shakers under first Stewart Day and then Steve Dale. And in more recent times the vibe that Keoghan champions has arrived in Grimsby and the Potteries, where the new owners of Grimsby Town and Port Vale are driving renewal in their respective communities.

Though you probably wouldn’t class Carol and Kevin Shanahan, the present owners of Port Vale as punks or post-punks – they are big fans of the club – their revival of the Valiants over the past three years or so has been powered by that same spirit and attitude. Under previous owner Norman Smurthwaite, clouds of doom constantly hung over Vale Park, and there was a real disconnect between the club and its support. The Shanahans have turned that around, making a real and genuine effort to reconnect the club with its fanbase and the wider community. That can be best summed up by their efforts during the COVID-19 pandemic and the various lockdowns which saw the club help provide food and other essentials for the most at risk local people. And the club has been rewarded. Supporters have returned to Vale Park in droves, season ticket sales have rocketed, and last season the club won promotion back to League One.

Over on the east coast, Grimsby Town’s new owner Jason Stockwood – who has acquired the club with his business partner Andrew Pettit – also has a different outlook in terms of what a football club can achieve.

Stockwood grew up in a poor household in the town and began his career in Grimsby’s declining docks while surviving an early brush with the law. Thirty years on, he’s a successful technology entrepreneur and has now tasked himself with reviving both the football club and the town. In an interview with The Guardian, Stockwood acknowledged that purely from a financial perspective acquiring the club makes no sense at all; but he’s looking at things differently, noting that in towns like Grimsby, “while many civic institutions and local businesses have faded away and shuttered over the years, professional football teams are one of the few institutions that have endured”, adding that his aim is to “rebuild civic value in the town” and place the club at the centre of its renewal. Like the Shanahans in the Potteries, he led his club to promotion during the 2021/22 season, the Mariners returning to the Football League.

While there is much disenchantment with modern top-flight football, Keoghan’s book paints a different picture; he illustrates that there is another way of doing football and that away from the top table there are those doing just that. People that see themselves more as custodians rather than owners; clubs that are owned by supporters, and are treated as anchor institutions designed to serve the communities in which they are situated rather than money-making machines.

‘Post-Punk Football’ is like a Ramones single; short, snappy, and to the point. It tells a host of important stories that are in the wider interests of football, and for those who are dissatisfied with or are against the modern iteration of the game, it provides hope.

Book review- ‘How to Win the World Cup’: Secrets and Insights from International Football’s Top Managers

Reffing Hell: An insightful, hilarious, hair-raising behind the curtain look at being a lower level ref