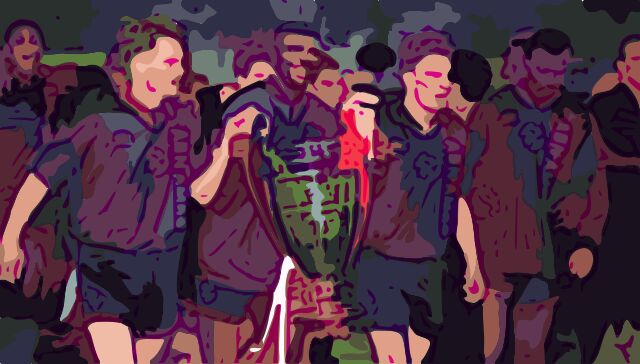 In the 2018/19 Champions League season, Ajax were the surprise package in the competition as they swept aside the likes of Real Madrid and Juventus to make the semi-finals – narrowly missing out on the final to Tottenham Hotspur on a dramatic night in Amsterdam, playing some beautiful football in the process.

This made some Ajax fans reminisce about some of their amazing players and teams over the years. One such team, managed by Louis van Gaal, managed to go on and win the Champions League in 1995.

So in this week’s piece, we want to go through Ajax’s Champions League run of 1994/95 and talk about why that Ajax team was so special to watch – from the group stages to the final itself.

Ajax were put into Group D for the 1994/95 Champions League season, consisting of AC Milan, AEK Athens and Red Bull Salzburg, known then as Casino Salzburg.

Their first group game was against the Italian giants in Amsterdam, both teams had quality within their ranks but it would end being the defences being on top as the first half ended 0-0.

But just six minutes into the second half, Ajax went front after Ronald de Boer scored to give the home side the lead. Playing total football, it was then 2-0 under 15 minutes later when Finnish midfielder Jari Litmanen buried his chance into the Milan net.

The match ended 2-0 to Van Gaal’s side, a brilliant start to what would be an amazing European run.

AEK Athens would be up next for the Dutch side in Greece in their second group match. with half an hour gone, the Greek side took a shock lead when Macedonian midfielder Toni Savevski scored and a potential shock result in the group stages was on the cards.

That possibility was put to rest quite quickly when Litmanen popped up once again to equalise for van Gaal’s men.

With the scores level at halftime, the Dutch side looked to up the tempo in the second half. This paid dividends when forward Patrick Kluivert scored just before the hour mark. AEK Athens couldn’t find a response and Ajax went back to Amsterdam with a 2-1 victory.

Van Gaal would take his side to Vienna for their third group game against Casino Salzburg. This fixture however would be a more frustrating affair for the Dutch outfit.

Despite several good opportunities, Ajax couldn’t find a way past Salzburg and the game ended 0-0. Picking up seven points out of nine, this was a pretty decent start to their Champions League campaign.

They would play Salzburg in the reverse fixture a couple of weeks later in Amsterdam. Once again Ajax were frustrated by the Austrian outfit as they continued to slow down Van Gaal’s side throughout the first half.

It was the same story in the second half and after 63 minutes gone, their tactics paid off when Tomislav Kocijan put Salzburg 1-0 and once again, a first defeat in the group stages for Ajax was on the cards, especially when the game was approaching the 80th-minute mark.

But with five minutes plus injury time left to play, Litmanen was there once again to tuck away his chance into the back of the net and get the Dutch outfit back in the game.

With neither side being able to find a late winner, the game ended 1-1 as Van Gaal prepared his side for the final two games of the group stages.

AC Milan would await them in the penultimate group game in Italy but unlike the reverse fixture, Ajax wouldn’t waste any time and got themselves into a 1-0 lead with only two minutes gone. Litmanen scored yet again to pick up his fourth goal of the competition.

That goal silenced the Milan crowd as Ajax took control of proceedings throughout the first half. It got even better for Van Gaal when Italian defender Franchino Baresi diverted the ball into his own net to give Ajax a 2-0 lead with 66 minutes played.

It proved to be decisive as Milan couldn’t find a response and Van Gaal’s men walked away from Italy with a 2-0 win, another three points and qualification into the knockout phases of the Champions League.

With qualification already secured, their last fixture against AEK Athens in Amsterdam was all about finishing the group on a high. This is exactly what they did when midfielder Tarik Oulida scored a brace to secure a 2-0 win for his side and ensure Ajax would top the group with 14 points.

After finishing top of their group, Croatian side Hajduk Split awaited Van Gaal’s side in the quarter-finals of the Champions League.

Because of their star-studded group of players, the Dutch were seen as the favourites to progress into the semi-finals, but throughout the first leg of the tie, Split put up a stubborn approach to continuously deny Ajax an away goal.

Both sides had their chances, with the away side having much in the way of possession but there was no way through for Van Gaal’s men as the first leg ended 0-0. A decent result for the Croatian side as they didn’t concede any away goals heading into the second leg in Amsterdam.

The second leg kicked off and for the majority of the first half, it was more of the same as Split continued to frustrate Ajax and their deadly attack.

But at the 39th-minute mark, the home side finally got their breakthrough when striker Nwankwo Kanu buried the ball into the back of the net, giving his side a deserved 1-0 lead in the tie.

After finally getting the opener they were craving, it only seemed a matter of time until they got a second. They didn’t waste any time getting that second goal as defender Frank De Boer stepped up to score just four minutes later to give Ajax a 2-0 lead heading into the halftime interval.

Having got a two-goal cushion, Van Gaal’s men were able to have a much more relaxed approach in the second half. Their semi-final place was confirmed after 67 minutes when Frank De Boer bagged his second of the match, sealing a 3-0 victory and booking Ajax a place in the Champions League semi-finals.

German giants Bayern Munich would await Ajax in the Champions League semi-finals, with the first leg taking place in Germany.

With both sides having an abundance of quality throughout the pitch, you would expect that the first leg would be a thrilling contest with plenty of goals to boot.

However, much like the first leg against Hajduk Split, there was a lack of goals throughout both halves of football as Ajax were once again frustrated by stubborn defending.

Even though Van Gaal’s side once again had chances to break the deadlock in the tie, they had to settle for another first-leg 0-0 draw as he prepared his side for the second leg of the semi-final clash in Amsterdam.

In the Dutch capital, Ajax would yet again bring the goals as Litmanen broke the deadlock with an 11th-minute header, scoring his fifth goal of the competition.

But unlike Hajduk Split in the quarter-finals, Bayern was able to respond when midfielder Marcel Witeczek levelled on 36 minutes, climbing above Danny Blind and Frank Rijkaard, the only members of the home side over 25, to nod in past Edwin van der Sar in the Ajax goal.

The goal came rather surprisingly as the home side were dominating proceedings, but not to be deterred by the German side’s equaliser, Van Gaal’s team got themselves back in front just five minutes later.

Right winger Finidi George’s thunderous strike raised the noise levels among the 45,000 fans at Ajax’s European home of the Olympisch Stadion, before the days of the Amsterdam Arena.

The noise got even louder for the home fans when Ronald de Boer made it 3-1 just before the interval, with Van Gaal saying after the match that “the team did not lose confidence, but just kept on going. By half-time, the match was done.”

Any doubts about the result were put to bed within seconds of the restart as Litmanen converted his second of the night and sixth of the campaign.

Bayern continued to battle on and managed to get a goal back when midfielder Mehmet Scholl scored from the penalty spot. But the night belonged to Ajax and with two minutes to go, Patrick Kluivert teed up Marc Overmars to seal a famous 5-2 triumph.

It was an amazing achievement for Van Gaal and this young Ajax team to reach the Champions League Final, but can they do one better and crown themselves domestic European champions?

Taking place in Vienna, Ajax would face their group stage rivals AC Milan in the final of the Champions League, a third and final battle between youth versus experience.

Having already defeated Milan home and away with a pair of 2-0 scorelines, would history repeat itself or will the Italian giants get their group stage revenge and win the European Cup?

Frank de Boer had the first chance to get the ball rolling in his team’s favour but could only head George’s corner over the bar.

The Rossoneri began to impose themselves on Van Gaal’s side as they began to become prone to mistakes. Twice his side were reprieved after being dispossessed in midfield; Christian Panucci’s deflected shot ballooned onto the roof of the net, while Marco Simone’s first-time volley was superbly thwarted by van der Sar.

The Dutchman, beginning to get more animated on the touchline, suffered more frustration soon after the interval when Zvonomir Boban – so canny at drifting into space unnoticed – picked out Daniele Massaro unmarked. Deft control, a tight spin and an early shot surprised van der Sar but ruffled only the outside of his net.

Changes were imminent as Kanu and Kluivert were brought on to try and swing the tide in their team’s favour. The Nigerian forward flashed an effort that went just centimetres wide, but it was a fellow substitute who had the final say.

With the most patient of approaches considering only six minutes remained, Marc Overmars, Edgar Davids and Frank Rijkaard were involved, finally unlocking a typically miserly Italian defence. Kluivert, with power, pace and poise personified, did the rest despite immense pressure.

With such little time to respond, Milan couldn’t pick themselves up and Kluivert’s strike proved to be decisive as the referee blew the full-time whistle, crowning the young Ajax team Champions League winners.

It was such a thrilling team to watch with quality players across the field, playing such great football as Van Gaal managed to guide this young group of hungry driven players to European glory.

Over the years many of these players would depart for bigger clubs, such as Van der Sar to Manchester United and Marc Overmars to Arsenal. But their success in Vienna will live long in the memory of Ajax fans for many years to come.