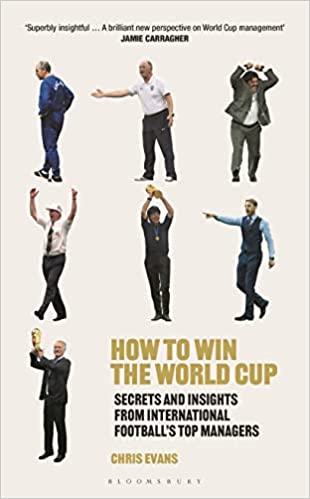 Sure, during the many, many hours you spend daydreaming your way through Maths lessons and bus journeys you might feature in an FA Cup final or two, and score the odd winner in the Champions League final, but the career that 12-year-old you envisaged you having always cultivates in you grasping the iconic trophy aloft on a hot summers night, a twinkle of light reflecting from the golden globe sitting at the peak, tens of thousands of fans chanting your name. You had done it. The pinnacle of football sat right there in your hands. That is, until Mr. Burns’ dulcet Irish tones finally broke through the hallucinogenic spell, bringing you back to earth at his third time of asking, and you had to inform him that no, you really didn’t understand algebra.

For the vast majority, this was the closest that we would ever get to winning the World Cup. Not for me, however, who in 1998 had an unbelievable run against all odds with almighty underdogs Zambia. I had successfully navigated all obstacles throughout the qualification campaign, taking the side all the way through to the Semi-Finals. You see, what Chris Evans neglects to tell you in his book is that the biggest threat to a successful campaign is an angry mum on the rampage who has asked you nicely several times to come and eat your tea, has had enough of waiting, and decides turning off your Nintendo 64 is the next logical step. Without you saving. At all. For the whole nine hours, you’d spent pouring your heart and soul into your campaign. My dad and I froze, looking each other in the eye, giving it our best Neil Warnock impression. “Oh well, it’s only a game”. No mum, no it isn’t. The World Cup, whether fictitious or in reality, is so much more than a game, as Evans gets to the bottom of as he delves into what it really takes to get to a World Cup finals, speaking to those in the know.

Far more than just a ‘how to’ guide for dummies, from the comfort of his kitchen table Evans has collated a collection of tales and insights by players and managers that have walked the walk and now talk the talk across seventeen chapters, crafted together by placing just as much importance on the traditional big sides as those whose aspirations are simply to qualify for the tournament.

Where one second you are discovering the lengths that Berti Vogts went to in order to spy on Sir Alex’s Scottish side of ’86, straight from the horse’s (or Coca-Cola mascot’s) mouth, the next you discover how the legendary Roger Milla only made the squad for Italia ’90 against the wishes of Soviet manager Valero Nepomnyashchy, who had been strong-armed into including the veteran striker by Cameroonian president Paul Biya.

Other fascinating stories emerge throughout, as you discover Nepomnyashchy’s tendency to discard players from their training camp in the middle of the night, causing a hostile, untrusting environment between players and the manager, with even staff members being unwilling to speak in front of the gaffer for fear of being punished. So how, then, did the Cameroonians manage to somehow reach the quarter-finals?

Or take Johan Cruyff, arguably the most influential figure in the history of the sport, the Godfather of ‘Total Football’, the rebel that made a habit of undauntingly stating his mind, regardless of repercussions and controversies that he would attract. That is, unless Rinus Michels, the protagonist of the footballing philosophy with which Cruyff had become intertwined with, was around. Long-time BBC commentator Barry Davies recalls the almost paternal relationship the two of them had, encapsulated in the moment that, during an interview, Cruyff gestured to his cigarette in the ashtray and told Davies that if Michels walked in, the commentator was to claim the cigarette as his own – evidencing the fact that in footballing hierarchy, in order to be successful, even the best, most famous captains and leaders need to have that little aspect of fear when it comes to their gaffer.

Perhaps the most charming, and interesting, aspect of Evans’ book, however, is that possibly the more gripping tales come from those names that you have never heard of before, or those who stir a slight half-memory in the back of your brain somewhere, leaving you searching their name on Google as soon as you finish the chapter, and leading you down a Wikipedia rabbit hole as you discover just how Otto Pfister’s five decade long managerial career lead him from Rwanda to Afghanistan, with a solitary World Cup campaign with Togo sandwiched in the middle. Whilst World Cup qualification is the pinnacle for managers such as Pfister who embark on a ‘permanent adventure’, as the German coach put it himself, even securing it sometimes doesn’t guarantee you will remain in the dugout in order to actually manage in it. Having led Saudi Arabia to qualification in 1998, a falling out with Prince Faisal led to Pfister getting the boot after he refused to change a player.

The tales detailing training camp fiascos and government falling outs are just as alluring as those documenting the in-game events, particularly when recounted firsthand by various people that were there. And, featuring interviews with over 70 players, managers and journalists, there are more than enough stories to go around!

Whilst purchasing the book may not guarantee you’ll win the World Cup, it will send you on a nostalgic journey on which you’ll reminisce the magic of the World Cup, rather than the oil-money sport washing campaign it has become, and might even inspire you to dust off your boots, go out and grab a coaching license or two, before catching a flight to Antigua or Mauritius and embarking on a managerial adventure of your very own.

Reffing Hell: An insightful, hilarious, hair-raising behind the curtain look at being a lower level ref